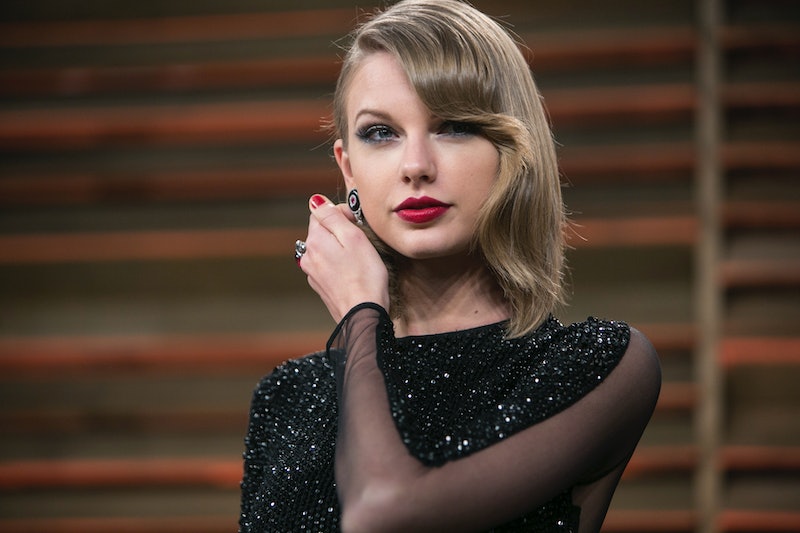 Taylor Swift's latest album, 1989, has totally taken the world by storm. I don't know about you, but I've been listening to it on repeat ever since it was released and I'm still not tired of it, which says a lot because I get tired of stuff pretty quickly. Every single song is QUALITY, so with each single she releases, I just get more and more excited for the next because there are seriously so many good tracks on the album to choose from. "Bad Blood" is the next to be released, and Swift has been teasing little bits about the video, which will include her and plenty of her famous friends as superhero alter egos, on social media for weeks. It's awesome, but what's potentially even more awesome (if that's even possible) is that the "Bad Blood" video has become a meme, and the results are hilarious.

Leave it to the internet to make the best jokes about, well, pretty much everything. Swift's "Bad Blood" video is a star-studded spectacle, but the movie-esque posters she's posted teasing each of the star and their respective characters is a pretty easy format to replicate — and to fill in with all the big names that got left out of what will clearly be a major production. So without further ado, here are 7 of the best "Bad Blood" memes you'll ever see.

Niall Horan as Just Happy To Be Here

I mean, come on — this is hilarious. The entire One Direction clan has been meme'd, but Niall's is just so random and hilarious that it had to be included. What's he doing? Who knows, but he's glad he's been invited!

Talk about random! Everyone loves Snickers bars, so it makes sense that a candy bar would become more of a hero in a Taylor Swift video than it already is in real life. Seriously — how many afternoons have you been falling asleep at your desk, only to be revived physically and emotionally by a Snickers bar? I rest my case.

If anyone knows about "bad blood", it's gotta be Once Upon A Time's resident evil queen, Regina Mills, right? What I wouldn't give to have her in Swift's video, but alas, it's just a dream...

Dame Judi Dench as Herself

Because who else would she be? Judi Dench is already a superhero in real life. There's no way she could get any better.

We all remember when Justin Timberlake brought sexy back, so why can't he bring it to the "Bad Blood" video, as well? Well, he can, and he will... sorta.

Ouch, this one is a bit of a bummer. It's long been rumored that "Bad Blood" is about Swift's former friendship gone bad with Katy Perry, and the whole "Regina George in sheep's clothing" comment was something Katy posted on Twitter when it all kicked off. Basically, it's drama... but I love it so much.

Meryl Streep is starring in the upcoming movie Ricki and the Flash, in which she plays a hard rocker. The outfit is perfect superhero material, and shouldn't Meryl Streep be in everything ever created because she's just that amazing? I think so.