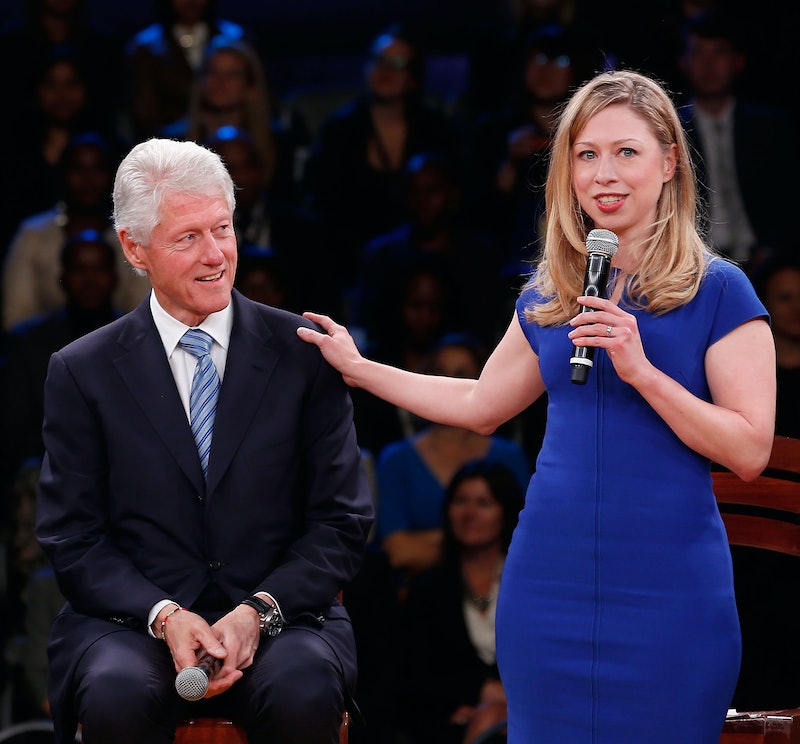 Roll those "Bill for First Lady" banners back up. An expert predicts that if Hillary Clinton wins the presidency, Chelsea Clinton could be America's First Lady in lieu of her father. While the prospect of the former First Daughter graduating to Lady brings up a whole host of questions, this the biggest one: Why do we even need a first lady in the year of our Lord two thousand and sixteen?

White House expert and C-SPAN's co-CEO Susan Swain told The Daily Mail that her "best guesstimate" if the Clintons moved back to their old Pennsylvania Avenue address would be that Chelsea would take over first lady duties. Swain is something of an authority on the subject — she literally wrote the book on first ladies. It wouldn't be the first time that a daughter assumed the role. After the death of his wife, Woodrow Wilson's daughter Ellen acted as first lady.

Swain noted that if Chelsea took over the hosting duties, it would free Bill up to take on policy issues or stay active at the Clinton Foundation, where Chelsea is currently vice chair of the board. But no matter who takes on the role, or what the hell we would call Bill if he took it, Swain said it was a key element of the presidency.

There is a social function to the first lady’s role, and that will not go away. It is important to have somebody in that role.

But does it really have to be the first lady?

The first lady's technical role is the official White House hostess. That's not to say that women such as Michelle Obama, Nancy Reagan, and, of course, Hillary Clinton sat around and baked cookies for visiting world leaders. Many first ladies take on their own causes and have led highly effective and influential campaigns for social good. Hillary took things beyond that when she became directly involved in policy matters.

But even if these highly capable, educated, and successful women never consult on State Dinner stemware, they are still treated as a lesser. There is no salary for being FLOTUS. First ladies might have a mission, an office, and a staff, but they are essentially unpaid ambassadors for their husbands' administration.

So why should Chelsea be expected to take over in Bill's stead? She, too, would have to leave her post as a principal for the Clinton Foundation. And better yet, why don't we get someone else to do the hosting and let first ladies live their lives outside of their husbands' career choices?

More like this
16 Novels That Paint A Realistic Portrait Of Abortion
By K.W. Colyard
How Getting An Abortion Has Changed From The ’60s Through Today
By Amanda Chatel
Police Never Found Enough Evidence To Charge Sharon Marshall’s Killer
By Brad Witter
Disney+ Has a Nature Docuseries Narrated By Michael B. Jordan
By BDG Studios
Get Even More From Bustle — Sign Up For The Newsletter