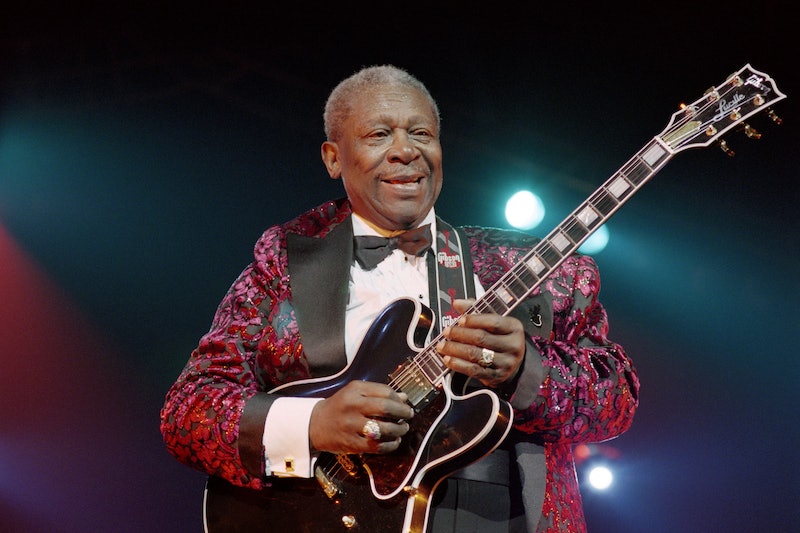 In sad news, blues legend B.B. King died Thursday, according to his lawyer, who told The Associated Press King passed away peacefully in his sleep at his Las Vegas home at 9:40 p.m. local time. Earlier this month, King announced via his website he was at home in hospice care, telling fans, "Thanks to all for your well wishes and prayers." He was 89.

The "King of Blues," whose real name was Riley B. King, was known for his eclectic guitar style, which included lots of string bending and vibrato. The Beatles might have made guitars gently weep, but King made them cry. He was best known for using various versions of the Gibson ES-355, so much so that Gibson Guitar Corp. created the B.B. King Lucille model in 1980 that was customized to the musician's tastes.

King is a 15-time Grammy Award-winning musician and singer, who won his last golden gramophone in 2009 for his album "One Kind Favor." King was also inducted into the Blues Hall of Fame in 1980 and the Rock and Roll Hall of Fame in 1987. King influenced countless musicians who came after him and is widely considered one of the best guitarists of all time.

With King's death, the thrill is truly gone.

More like this
Drake’s Surprise Performance With The Backstreet Boys Was Fans’ Fire
By Stephanie Topacio Long
Mollie King & Stuart Broad Have The Most Relatable Wedding Plans
By Sophie McEvoy
What Is Shakira’s Net Worth? These Figures Definitely Don’t Lie
By Maxine Harrison
'Friends' Creator Marta Kauffman Opened Up About Misgendering A Guest Character
By Grace Wehniainen
Get Even More From Bustle — Sign Up For The Newsletter