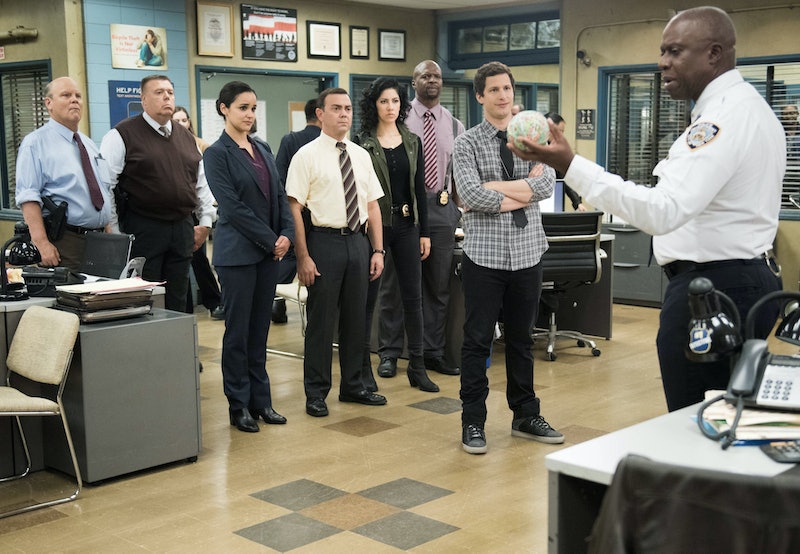 In a world of uncertainty and a television landscape of the same, what a relief to know that there are some sure things. Since its premiere in Fall 2013, Brooklyn Nine-Nine has been a solid hit on Fox's schedule. With the way that half-hour network comedies have been ruthlessly picked off without being given a significant chance to prove themselves (RIP Selfie, Trophy Wife, Enlisted, and so many others that I want to weep), Nine-Nine finds itself in the unlikely position of being secure. It pulls in steady ratings for its network, and so was rewarded with a renewal way back in January. It's coming for certain, but when does Brooklyn Nine-Nine Season 3 premiere?

Fox hasn't come through with the show's premiere date just yet, but the network did unveil its fall schedule at its annual upfront presentation, and there it was. I wasn't surprised to see Brooklyn Nine-Nine staying put in the Fox Sunday night comedy block, cozied up in the 8:30 slot. It's a night of relatively risk-free programming, with Bob's Burgers, The Simpsons, Family Guy, and Last Man On Earth all continuing to pull their weight. Look for a debut date for Brooklyn Nine-Nine Season 3 to be announced over the summer, but breathe easy knowing that the ensemble comedy will be back this fall with new perps, new cases, and new self-imposed action hero nicknames for Jake Peralta. Here are some other things I'd like to see when the show returns.

I've been loving Kyra Sedgwick's vindictive turn as Captain Holt's arch-nemesis this season, and the show's made excellent use of other guest stars too. With the collective comedic power of the ensemble and the creative team (Don't forget that Brooklyn Nine-Nine comes from the showrunner who brought you Parks and Recreation), there's an army of talented connections that could come to the table next year.

In the midst of its ridiculousness, Brooklyn Nine-Nine quickly developed a nice set of relationships between its characters. My favorite dynamic is the one between overeager super-cop Jake Peralta and the (usually) stoic Captain Holt. We met Jake's dad this season and saw that the disappointment there is partially why he's so intent on making Holt like him. The thing is, Holt does, often in spite of himself. They're quite a team when they want to be, though I also hope they never stop annoying each other.

I like seeing the Nine-Nine working towards one major goal all season, even if they also have to tackle smaller problems in between. We had a bit of this season-long plotting with Craig Robinson's character, Doug Judy; writing in another "big bad" would be an ideal opportunity to pull in my first suggestion: some major guest star casting.

Actually Going There With Jake & Amy

Jake and Amy have been dancing around each other for two whole seasons (the "double tuck"!), and — don't get me wrong — it's been adorable. But Brooklyn Nine-Nine is an ensemble, not a romantic comedy. The writers can put these two together without fearing that they're losing all their material. The complications and embarrassments of dating in front of their nosy coworkers is going to replenish whatever jokes are lost in unrequited love anyway. It's time to pull the trigger.