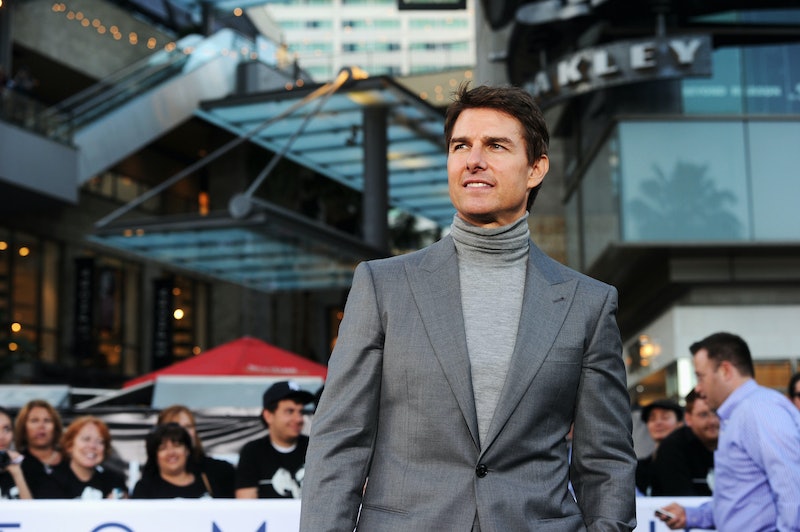 I know this was probably just keeping you up late at night. "How," you probably wailed aloud into the darkness of your room, "how is Tom Cruise's relationship with his daughter, Suri, faring after those terrible tabloid stories saying he abandoned her?" WELL, it's your lucky day, because I've got the news to put all of your stomach-gnawing fears to rest. According to USA Today, Tom Cruise says he's close to Suri, and any allegations that he's an absentee father — like those claims made by Life & Style and In Touch — are so false, that he's suing.

Cruise has reportedly slapped both Life & Style and In Touch with a gigantic $50 million lawsuit for the stories, which basically claimed that Cruise had abandoned Suri after his marriage to her mother, Katie Holmes ended. In court documents, Cruise is adamant that this isn't true, stating, "I have in no way cut Suri out of my life — whether physically, emotionally, financially or otherwise."

According to TMZ, who describe the documents as "very revealing," he even breaks down previous occasions when he's spent time with her. Also, kind of hilariously, he apparently refuses to refer to Holmes by her name (or even "Kate!"), instead labeling her as "Suri's mother" in the documents.

"As my numerous emails with Suri's mother during this time period demonstrate, I was a constant presence in Suri's life.... while I'm sure my daughter misses me when I am not with her (as I miss her), she is a very happy child, and we have a wonderful relationship and cheerful phone calls."

Cruise's lawyers are reportedly asking the judge to make Bauer Publishing Co. admit that they had no sources to support their story about him and Suri, while Bauer's lawyers are asking the judge to deny his request, instead claiming that they have proof from "confidential sources" that he did miss her first day of school when he could have easily flown to NYC to see her.

More like this
Shaq Might've Spoiled His Relationship Status With Kirsten After 'MAFS'
By Brad Witter
Airris From 'MAFS' Says He Doesn’t Regret Going To Decision Day With Jasmine
By Brad Witter
The History Of Taylor Swift's "All Too Well" & What The Lyrics Actually Mean
By Jake Viswanath
Vanessa Hudgens Is Reportedly Engaged To Cole Tucker
By Jake Viswanath
Get Even More From Bustle — Sign Up For The Newsletter
From hair trends to relationship advice, our daily newsletter has everything you need to sound like a person who’s on TikTok, even if you aren’t.