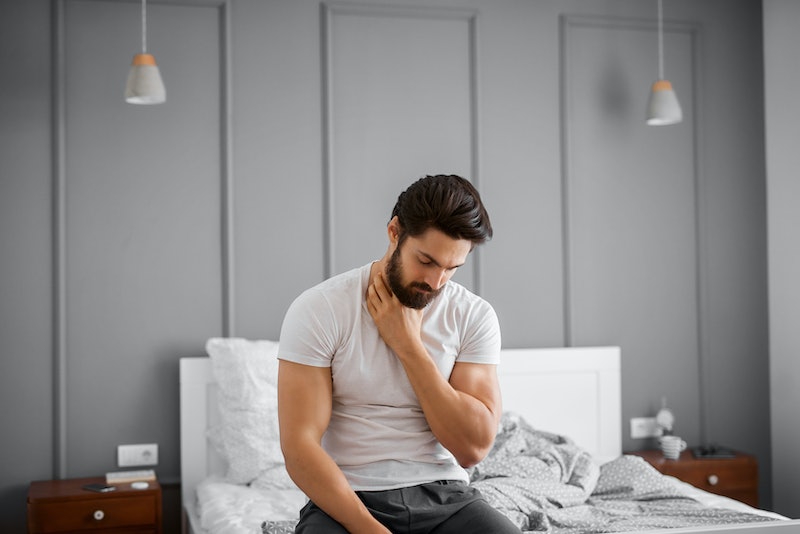 Woo-hoo! You're about to have sex with a new guy. You're engaging in foreplay and things are getting hot. In between heavy breaths, you ask if he has protection — because if he doesn't, you certainly do! And then...he starts to whine, gripe and grumble. Why? Because he doesn't want to wear a condom. Ugh, why don't guys like using condoms?

A show of hands please: who else is tired of being on the receiving end of the "sex-sucks-with-a-condom-on" conversation? Who else is fed up with having to defend their preference for safer sex? Yes, I said defend. Because if you're like me and many of my peers, you've been subjected to attempts of emotional manipulation, bargaining, negotiating, and — when desperate, pleading — at least once in your life, simply for insisting on condom use.

In fact, if you go to Google and type "men's excuses for not wearing a condom" into the search bar, you will get almost 700,000 results. Then type "how to deal if a guy won't wear a condom" - and you get more than 1.5 million results. In other words: men complaining about condom use, and flat-out refusing to wear protection, is not a rare occurrence.

Dudes, we get it. We knowyou think sex feels better without a condom. But hey, they're necessary. You don't need the latest STD/STI stats from the Centers for Disease Control and Prevention (CDC) to know that (that said, I've included a link if you want them).

But until the protests stop, here are seven of the most pathetic and ill-informed excuses men have used to get out of wearing a rubber — and a few suggestions for responding to this gibberish.

Suggested response: Do you have something called the internet? If so, then surely you know that the Pill only works against pregnancy. Plus, I don't have any STIs that I know of. You should be as wary of me as I am of you. Safety and trust are two separate things.

2. Throwing out the "Vasectomy Card"

The general dialogue: I'm V-safe. I got it done so I would never have to wear condoms again.

Suggested response: Congrats. But vasectomies have absolutely nothing to do with disease protection. Moreover, if you haven't been using condoms since your vasectomy, all the more reason you should wear one now. But hey, thanks for worrying about getting me pregnant though.

The general dialogue: Condoms smell and taste nasty. So don't expect me to go down on you or anything.

Suggested response: Thank you. Nothing helps get me in the mood quite like being told I'll be penalized for putting my well-being first.

4. Lamenting a lack of emotional connection

The general dialogue: Use a condom? But I want to feel closer to you!

Suggested response: If you want to feel closer to me, we can cuddle right afterwards. It's scientifically proven.

5. Insinuating he's not going to enjoy himself

The general dialogue: Don't you want this to be an amazing experience for both of us?

Suggested response: So let me get this straight. If you wear a condom, it will be a terrible experience. For you. And that will be my fault because...?

The general dialogue: I can't believe you're suggesting I may have a sexual disease!

Suggested response: Um, hello? Anybody can contract a sexual disease. Stop pretending you're not in the same category as every other sexual being on the planet. You're not some magically immune leprechaun. And for the record, neither am I. Thus, the need to use condoms.

The general dialogue: You're, like, the first girl/woman who has ever made this an issue.

Suggested response: Oh really? Because if that's true, then you've obviously taken many unprotected risks in your sexual life. And if it's not true, then you're trying to emotionally manipulate me by making it seem like I'm in a minority for insisting on protection. Not cool, dude.