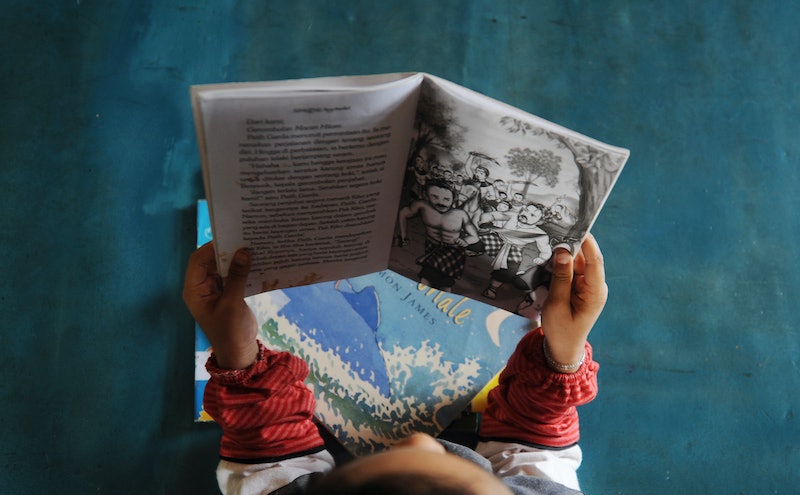 Here's a story to restore your faith in, well, a lot of things: 7-year-old Ana Mell Araújo Rocha Silva, AKA "Mell," dreamed of opening up a public library in her small city of Mata Grande in Alagoas, Brazil. After her campaign went viral, Mell received more than 5,000 book donations to her "Mell's Library" fund from people across Brazil. See? The world isn't always the worst.

"Books have three qualities: having them, exchanging them, and their smell," Mell said to The Huffington Post. "You can journey through literature, and be in Mexico, or anywhere else, while sitting still."

Mell wrote this letter to her aunt, translated into English, describing the purpose of her library idea:

Dear Aunt Fafá,I have a goal, to create a small library, so I would like to know if you could get some books, so I can put them in my collection. Let's encourage reading, for my little friends and me, and anyone else who is interested. Let me know, I know you will embrace this idea of mine.With Care,your nieceMellCrossroads Farm,Mata Grande, Al

Mell's aunt posted her letter to social media at the end of March and, before long, it had 18,000 views on Facebook and went viral across Instagram and it kickstarted social media pages under the names "Biblioteca da Mell," or "Mell's Library." Since then, books have been arriving at Mell's address from across the country. The Alagoas Secretary of Education jumpstarted the donations by sending Mell more then 2,700 books. The Military Police Academy took note and donated around 2,000 more books to the fund. Mell has also received public support from many Brazilian singers and celebs.

After book donations started rolling in, Mell spoke with the manager of the State Public Library in person about her dream of creating a library branch in her hometown. Basically, she's a boss.

The donated books are currently being housed in the State Public Library archives until work can be done building a branch in Mata Grande. Staffers there are already at work cataloging the many donations, which are still coming in.

Public libraries are a cornerstone of early childhood education and development. According to the Organization for Economic Co-operation and Development (OECD), "the performance advantage among students whose parents read to them in their early school years is evident regardless of the family’s socioeconomic background." Clearly, this means that adults and children need easy access to books to read. A local public library is a great start to level the playing field among children growing up in poorer and wealthier communities.

Mell's godmother spoke out about the impact these donations are having on Mell:

She is very happy with everyone's support and happy to see her dream being realized. Each book she receives makes her smile. It's a very happy feeling, seeing Mell's dream coming to fruition, and inspiring cooperation in others, showing us all that literature is alive and well.