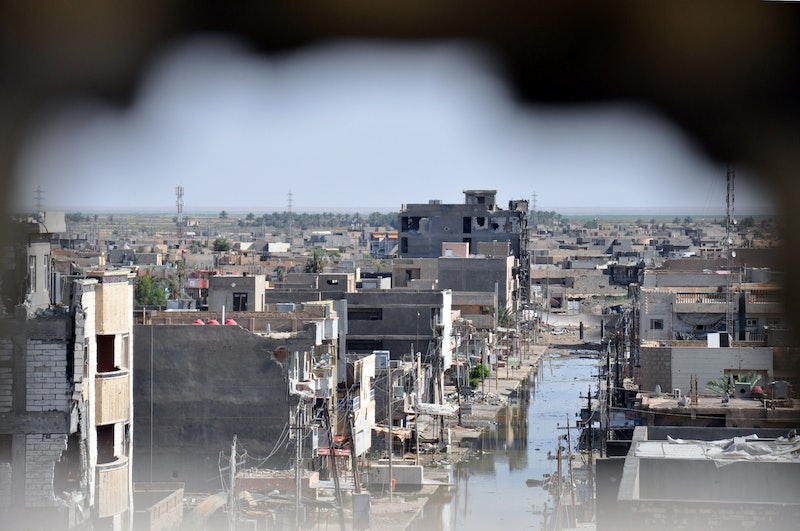 A ruthless offensive begun Thursday evening resulted in ISIS militants seizing control of a government building in the Iraqi city of Ramadi Friday. Islamic State fighters raised the black flag of the organization over Ramadi’s provincial government compound, in Iraq’s western Anbar province, Reuters reports. Anbar Governor Suhaib Al-Rawi told CNN that the offensive, involving six suicide car bombs, allowed the militants to reach the center of Ramadi — a strategically important city that has been in danger of succumbing to the ISIS advance for some time. The news comes as ISIS leader Abu Bakr al-Baghdadi, previously reported as “incapacitated,” seemingly re-emerged as an active player in the ongoing turmoil across Syria and Iraq.

Ramadi is only 70 miles west of Baghdad and has been the focus of intense fighting between Iraqi security forces and ISIS militants for months. In April, U.S. defense officials warned that the city was on the brink of falling, as ISIS fighters ravaged surrounding infrastructure and captured nearby villages, and Ramadi residents fled in terror. Although senior military officials downplayed the city’s importance at that stage, Ramadi — on the banks of the Euphrates — is a key point on the highway connecting Iraq with Syria. The city’s size, and its proximity to Baghdad, would make its capture an important victory, both strategically and propagandistically, for the Islamic State.

Fighting continued in sectors of Ramadi Friday, and government forces maintained control of a government building in the west of the city, according to Reuters. The agency highlights that Ramadi’s capture would represent “a strategic blow to Prime Minister Haider al-Abadi's government,” less than two months after the Iraqi military (in collaboration with Shiite militias) managed to reclaim the city of Tikrit — a settlement northeast of Ramadi, on the country’s other great river, the Tigris.

In a statement reported by Reuters, ISIS claimed to have overrun the government building and secured control of the compound, after “eliminating the apostates” who remained inside. BBC reported that 50 security personnel were taken hostage in the building. It is unclear whether these hostages remain alive, or have been killed as the ISIS statement suggests. The militants set fire to the compound after staking their claim to it, The New York Times reports.

Local police said that ISIS fighters used an armoured bulldozer to get past blast walls protecting a police department next to the government building. They then detonated the explosives in the bulldozer once it was in place. Meanwhile, a similarly rigged-up Humvee hit the city’s education department, and another car bomb targeted the central government building. Three other vehicles exploded outside the Anbar Operations Command, in the west of the city. At least 11 people had been killed in the attack, according to sources in the city’s hospitals.

The Times reported that the government building’s capture, while not indicative of the definitive defeat of Ramadi, signalled a turning point in the ongoing battle for the city. A year and a half of fighting has left the city in tatters, with 114,000 people fleeing the area (many for Baghdad) in the past month alone, according to the UN’s refugee agency.

“The only [government] forces still fighting are confined to a few pockets in Ramadi but they have no command post anymore,” Sheikh Hekmat Suleiman, a Sunni politician and adviser to the government on Anbar province, told AFP Friday. Despite calling in to Baghdad for reinforcements Thursday night, a provincial security official in Ramadi told the Times that they had received no assistance. “There was no reaction,” he said. ISIS controls much of Anbar, and the fall of Ramadi would make their grip on Iraq’s largest province even more secure.

Meanwhile, many miles west of the Ramadi battleground, the UNESCO world heritage site of Palmyra — in central Syria — was also on the brink of submitting to ISIS control. Militants had advanced to within a mile of the unique ancient site Thursday, and observers feared that the desert ruins — remnants of one of the most important cultural centers of the ancient world — were existentially threatened by the ISIS approach.

The militant group has previously (with seeming relish) wreaked distruction on the ancient sites of Nimrud and Hatra — taking sledgehammers, bulldozers and explosives to the cherished heritage sites.