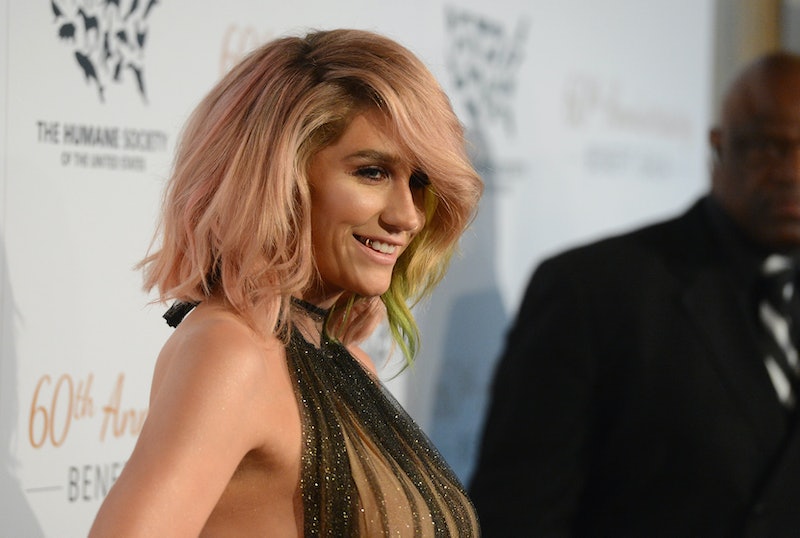 Kesha is opening up about a painful time in her past. Though the singer, once clad in glitter and bling jewelry, is feeling healthy post-rehab, things were not always well for her, especially in the days when her hyped-up party girl image was all the rage. She has admitted in the past that she had an unhealthy relationship with food in those days. And now, Kesha has opened up more about her eating disorder in a new interview with Vogue. She told the magazine,

I was singing these songs like “We R Who We R,” and I really believed them. I wanted to be genuine. But I was sad and [I wasn’t eating]. That’s not good for your body, metabolism, or brain.

Kesha told Vogue she spoke to her therapist and also called her mother to say she needed help. She also went to an eating-disorder rehabilitation site where she learned that food is a positive thing for your body and which helped her realize the importance of being healthy. Although she now wants to embrace her shape, she admitted that it is still "difficult" sometimes. She explained, "Every day I have to look in the mirror and make the choice to be kind to myself."

It is worth applauding Kesha for speaking up about an issue that is sadly still taboo. Not only does the singer help raise awareness of the eating disorder by talking about it and the harmful toll it can take on one's body, but it also serves as a positive message and reminder for all who struggle with eating disorders that it is indeed very possible to recover, especially with the right mind-set.

As Kesha points out, self-esteem plays an especially important role when it comes to rehabilitation. It's hard, sometimes even impossible, to get your groove back without altering your mindset for the better.

Her works also serve as a good reminder that things aren't always what they seem in respect to peoples' well-being. Just because someone may seem happy and satisfied with how life is treating them does not mean that's actually the case. It will probably be hard to look at Kesha's old party anthems like "We R Who We R" the same way now since she said she was not happy while singing them. But that is not a bad thing.

Instead, this just opens up a conversation about the juxtaposition. Though it might be a loss of one "fun song" at a party, in the long run, thinking about what was going on in Kesha's life at certain points in her career can be a helpful way for young people to open up about more important things like body image and self-esteem. It could even potentially save lives. Kudos to Kesha for continuing this conversation!

More like this
This TikTok Trend Will Help You Be Kinder To Yourself, Says Scarlett Moffatt
By Frances Stewart
Travis Barker & Kourney Kardashian’s Updates About His Health Are Promising
By Stephanie Topacio Long
Victoria Beckham Spoke Out About Being Weighed On Live TV After Giving Birth
By Frances Stewart
Lily Allen Was “Quite Emosh” After Performing Sober At Glastonbury Festival
By Stephanie Topacio Long
Get Even More From Bustle — Sign Up For The Newsletter