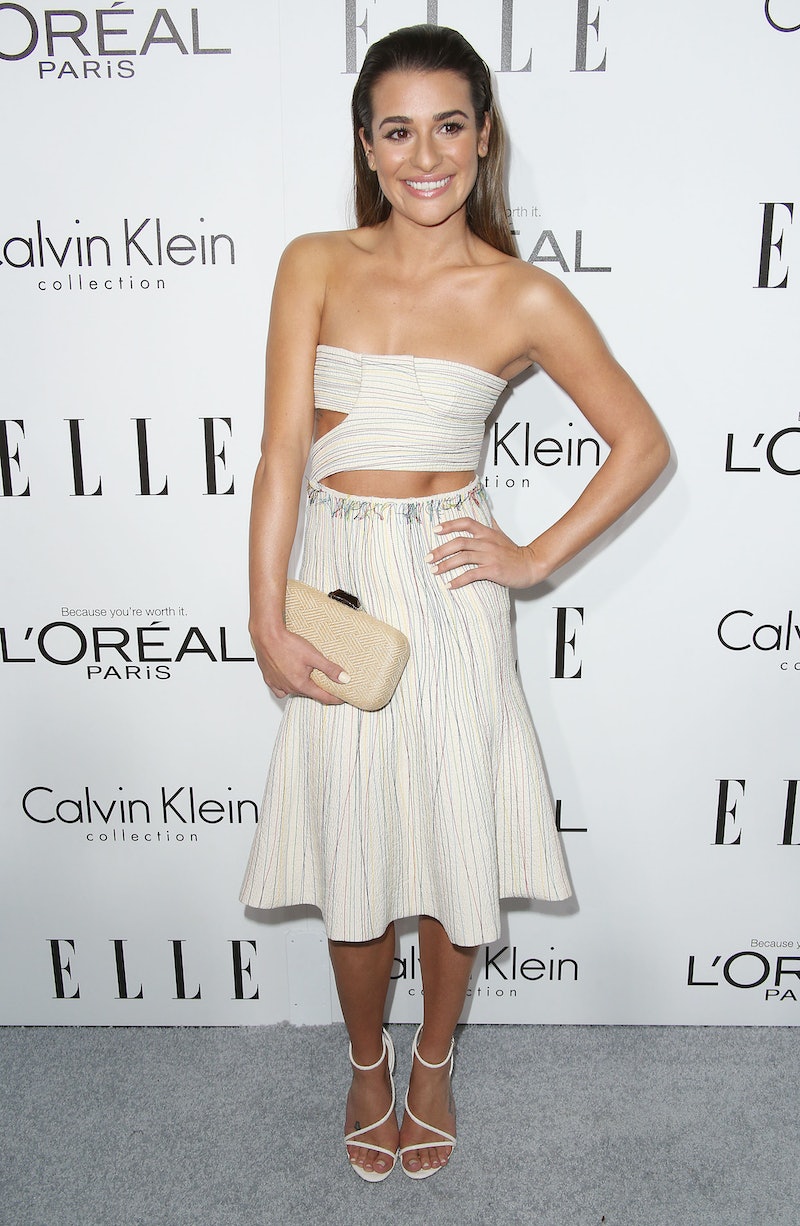 It's been four months since Monteith's death, but Lea Michele is constantly finding ways to pay tribute her late boyfriend. And in the months since his death, the former Glee star has been nothing but strong. Lea Michele's new tattoo pays homage to Monteith, as she had the last words he ever spoke to her inked on her ribcage. The tattoo's phrase "If you say so," was revealed at the Elle Women Awards on Oct. 21st when she wore a Calvin Klein cutout dress that displayed the ink.

These final words, now immortalized in ink, have another significance, as they are also the title of a song she wrote dedicated to Monteith that will premiere on her debut solo album. Though she began work in the album back in October of 2012, she pushed back the release date to add a final song for her late love. She told Elle magazine, "The album was done, and the label said, ‘Do you want to add anything?' I was like, ‘I might regret it if I don’t.’" She recorded the track with Australian singer and David Guetta collaborator, Sia. “I said [to Sia], ‘I feel like I'm starting to just sink it in it, and he would never want me to do that. I need to remember that you have to live, because you can want to die,'” she told the mag.

Another song on the yet-to-be-released album, "You're Mine," was inspired by her co-star beau. “It was ours,” she said of the song. “When I think of him, I play this.”

But the fresh ink is not the first public display of devotion Michele has unveiled to the public. After his death in July, Michele wore a necklace with the charm "Cory" to the Teen Choice Awards. Soon after, Michele instagrammed a photo of herself wearing a necklace with Monteith's Glee character name "Finn," the same piece of jewelry her character Rachel wore for many episodes.

Appropriately, the necklace was featured in the Cory Monteith/Finn Hudson tribute episode of Glee, which dealt with the death of the beloved football quarterback turned Glee club member. A uplifting and nostalgic episode, the hour long tribute celebrated the life of Finn rather than his death (an aspect some fans were displeased with, as the show failed to address how, exactly, he had passed). Regardless of its execution, the tribute episode served its purpose well: Allowing viewers and longtime fans of Finn to grieve together along side a healthy number of sob-inducing ballads and hand-holding. And Michele, appeared near the end of the episode for one hell of a gut-wrenching number, performed Bob Dylan's "Make You Feel My Love" as we took a tissue to our noses helplessly.

Perhaps the most brave way in which Lea has grieved, and helped us as fans grieve along with her, is by speaking openly and honestly about her relationship with the actor. At this year's Teen Choice Awards, Michele thanked her and Cory's fans for their support, and dedicated the award she won that evening, Best TV Actress in a Comedy, to Monteith. "For all of you out there who loved and admired Cory as much as I did, I wanted to promise that with your love, we're going to get through this together," she said to the audience. "He was very special to me and also to the world and we were very lucky to witness his incredible talent, his handsome smile and his beautiful, beautiful heart. He reached out and became a part of all of our hearts and that's where he's stay forever."