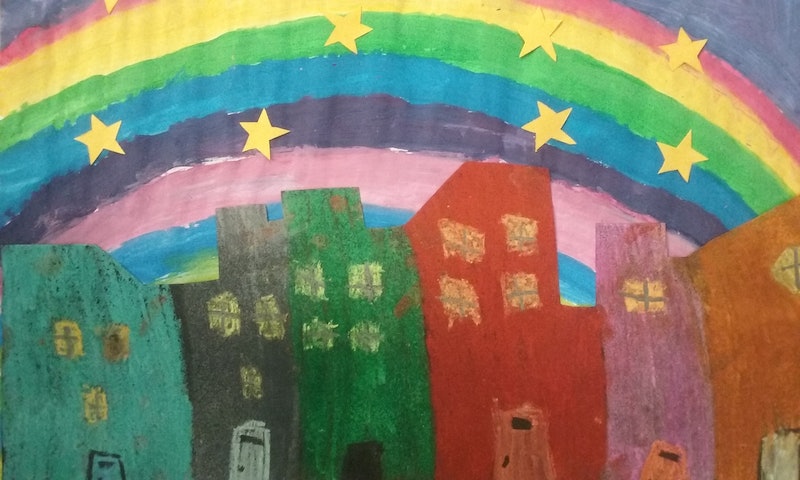 Recently, I found myself mindlessly refreshing my inbox, when an email caught my attention. A Baltimore art gallery needed artists to donate work for a silent auction benefiting a youth center damaged during the city's protests over the death of Freddie Gray, the 25-year-old black man who died from a spinal cord injury while in police custody. In the days leading up to Gray's April 27th funeral, what began as peaceful demonstrations turned into protests that, according to a U.S. government survey, resulted in at least $9 million in damages. Gray's death struck many people as yet another racial injustice in a city — nay, a country — full of them. Now, Baltimore artists and cultural organizations are rallying to repair local properties and create opportunities for the city's black population.

Broadly, "opportunities" means agency. Specifically, this means education, employment, safety, and a public voice for the city's 63 percent black majority. One-quarter of Baltimore residents live in poverty, and the city's high school graduation rate is 54 percent. Though Baltimore's general unemployment rate is more than eight percent, the unemployment rate among the city's blacks is nearly 58 percent. There were 211 homicides reported in 2014. Thus far in 2015, there have been 143.

When I grabbed an old mixed-media piece and jumped into my car to head over to Gallery 788 in Baltimore's Hampden neighborhood, I shared the hope that art could help break Baltimore's cycle of violence and poverty. Here's what else I found out about the art scene in Baltimore that's aiming to enact change.

During the riots, Baltimore's Youth Empowered Society, a drop-in center for homeless youth, was set on fire, rendering it unusable for more than a month. Gallery 788 owner Eduardo Rodriguez immediately decided to hold a silent auction to benefit YES. He asked local illustrator and photographer McKenzie Elizabeth Ditter to organize the event. Despite what she described as multiple other obligations, she agreed.

“I feel like artists have a responsibility to give back to their communities through art,” says Ditter. “Seeing how my friends have volunteered their time to create beautiful posts for protests or T-shirts to support the movement's core believes has been really inspiring. I hope it continues and that April served as a wake-up call.”

On June 5, YES, which received funding from sources apart from Gallery 788, organized an open-house fundraiser for the public to view the repairs completed since the protests.

Ditter says she expects Gallery 788 will contribute to future efforts related to Baltimore's low-income youth and children, though there are no plans in the immediate future.

Before the protests, places like Jubilee Arts Center and Arts Every Day were already using art to promote social justice and provide opportunities for Baltimore's low-income black communities. The mission now is stronger and more urgent.

Assuming various incarnations since 1996, Jubilee Arts Center, a self-described "catalyst of social change," according to its website, has been working toward giving Baltimoreans a creative escape. Jubliee is the arts center in Freddie Gray's neighborhood, Sandtown-Winchester, where 96 percent of the residents are black and more than 43 percent live below the poverty line. According to a joint report issued by the Justice Policy Institute and Prison Policy Initiative, more Maryland inmates come from Sandtown-Winchester than any other single neighborhood in the state.

From June 29 to July 31, Jubilee is partnering with the Baltimore Office of Promotion and the Arts for a program called Art @ Work, which will employ 80 black youths between the ages 14 and 21 as apprentice muralists. The unemployment rate among young Baltimoreans is 16 percent.

In a statement appearing on Jubilee's Facebook page, the organization's director, Todd Marcus, said, "This project will be a meaningful collective response to events of April 27. Our community-based nonprofit and youth from our neighborhood, who will be employed as key stakeholders, will be creating murals that will beautify our community for years."

Years before the protests, Arts Every Day had been teaming up with the Walters Art Museum for what has become an annual student art show.

This year's My Baltimore , which ran from May 20-31, “took on new meaning in the wake of the recent events,” says Julia Di Bussolo, Arts Every Day's executive director. Her organization serves 36 elementary, middle, and high schools, including Matthew A. Henson Elementary School, which Freddie Gray attended as a child.

“Knowing teachers were on the front lines of helping youth and community discuss, cope, and reflect on the Uprising, we chose to augment the exhibit by gathering documentation of how teachers and community organizations across the city addressed the Uprising with their students and young people,” she says.

When Arts Every Day announced the show theme last September, the plan was to complement the pieces in the Walters' permanent collection that were specific to Maryland. In addition to the Maryland postcards and paintings of Fort McHenry originally selected, the show featured first reactions, creative writing, and in-progress sketches and other projects related to the protests.

"It's important to capture these reactions and facilitate dialogue with students. The students are feeling the effects in a clear, visceral way," says Di Bussolo. "They live with this happening in their neighborhood. With the media saturation, some people forget that this is people's daily lives. But then again, these students experience traumatic events all the time. This is one piece in an ongoing struggle."

Baltimore's third annual Thinkathon — a joint effort between the Arts and Humanities Center for Synergy, the Greater Baltimore Cultural Alliance, and the University of Maryland Francis King Carey School of Law to facilitate organizational partnerships — had already been scheduled when the protests broke out. It was a brainstorm, not a fundraiser or otherwise more targeted event.

"Participants offer topics when they register and many suggested topics that address conditions in Baltimore that led to the protests such as food deserts and school to prison pipeline," says Sheri Parks, Associate Dean for Research, Interdisciplinary Scholarship and Programming at the University of Maryland. "That week we added two topics, Emergency Response and Art and Trauma."

A Call to Action

But art in Baltimore is not limited to community art, says Jeannie Howe, executive director of the Greater Baltimore Cultural Alliance. There are established theaters, concert halls, museums, and galleries looking to attract patrons from Washington, D.C., Philadelphia, New York, and beyond — places Howe argues are necessary to support for the sake of Baltimore's economy.

"I urge people across the country to do their civic duty and come to Baltimore," says Howe. "Come see a play. Come see a concert. That's what's going to help move the city forward. Baltimore has a lot to offer."