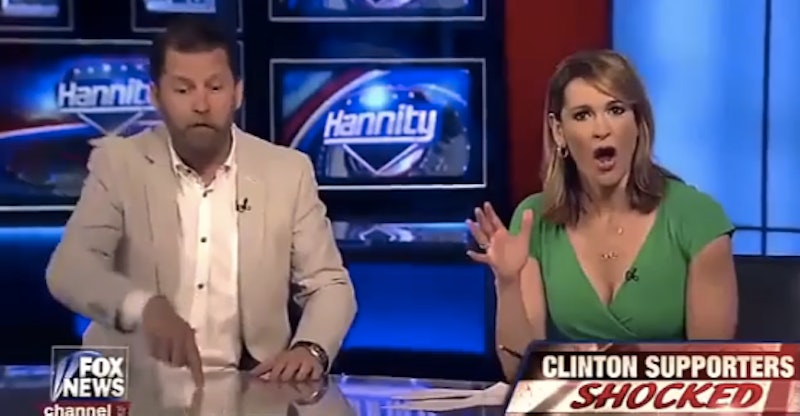 You know things are bad when you're freaking out Sean Hannity. On Thursday's episode, Fox contributor and Vice Media co-founder Gavin McInnes, who left Vice in 2007, said men earn more than women because they are "less ambitious." His tirade left a female analyst speechless, and Hannity — who regularly broadcasts bullshit without blinking an eye — flailing in the aftermath.

McInnes: "Let's look at the big picture here. Women do earn less in American because they choose to. They would rather go to their daughter's piano recital than stay all night at work, working on a proposal, so they end up earning less. They're less ambitious."

McInnes: "This is sort of God's way — this is nature's way — of saying women should be at home with the kids. They're happier there."

Holder was rightfully angry about having to sit next to someone who was coming out with this stuff. And she actually made a pretty valiant effort at making people understand that they were listening to the ramblings of a crazy man.

"I hope that your viewers do not take you, sir, seriously," she said, going on to call the comments "deplorable."

If you were a real feminist you would support housewives and see them as the heroes, and women who work wasting their time.

Hannity, who had been sitting in what I can only speculate was gleeful and horrified silence, at least made some sort of show when McInnes turned the attack on Holder specifically. He advised Holder, who is unmarried and does not have children: "You would be much happier at home with a husband and children." Not that Hannity did anything to stop him, but he at least face palmed while he thought about how viral all of this was going to go.

I can't figure out if McInnes was just doing this for the sake of trolling or if he has slowly come undone since leaving Vice Media in 2007. He did have one thing right, though. Men do work more than women, according to data from the Labor Department.

By a whole half hour a day. But the interesting thing is if we compare women and men who work the same number of hours, there is still a wage gap. And in fact, it gets bigger with more hours worked.

So, riddle me that, McInnes.

More like this
Here’s Everything Coming To & Leaving Netflix In July
By Grace Wehniainen
Paramount+ Wants To Take Over Your Netflix
By Sophie McEvoy
What’s New On Netflix: The Return Of 'The Umbrella Academy'
By Arya Roshanian
Why You're Seeing Green Bandanas At Abortion Rights Protests
By Lexi Inks
Get Even More From Bustle — Sign Up For The Newsletter