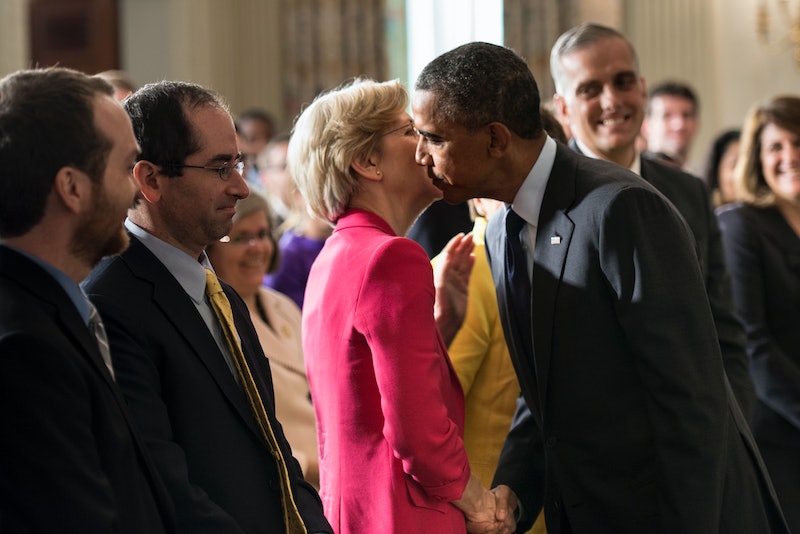 In comments that swept the free trade initiative dispute into even murkier waters this week, Senator Sherrod Brown accused President Barack Obama of sexism Tuesday, due to the president’s pointed opposition to Elizabeth Warren’s critique of the fledgling trade proposals. Senator Warren, Massachusetts liberal and beloved progressive firebrand, has consistently decried the Trans-Pacific Partnership (TPP) and the Transatlantic Trade and Investment Partnership (TTIP), which Obama failed to push through the Senate this week. Obama, meanwhile, has denounced Warren’s approach as “absolutely wrong.”

Speaking with Yahoo News last week, Obama firmly chastised his Democratic colleague. “The truth of the matter is that Elizabeth is, you know, a politician like everybody else,” he said. “And you know, she's got a voice that she wants to get out there. And I understand that. And on most issues, she and I deeply agree. On this one, though, her arguments don't stand the test of fact and scrutiny.” Ohio Democrat Brown hit back on Tuesday, saying that Obama’s comments were “disrespectful” and displayed gender bias.

Brown based his assertion on the “personal” nature of Obama’s statement, and the connotations he detected in Obama’s vocabulary. “I think by just calling her ‘another politician’ [he’s being disrespectful],” Brown said, adding: “I’m not going to get into more details. I think referring to her as first name, when he might not have done that for a male senator, perhaps? I’ve said enough.”

The White House has said it expects an apology from Brown for his assertions of bias. “There are a number of instances where the President has used the first name of the senator to reference them in public, both men and women, including multiple instances in which he's referred to Sherrod Brown as Sherrod in public setting,” White House press secretary Josh Earnest said. “I believe that Senator Brown, given the opportunity to consider his remarks, will then offer up an apology because he's a stand-up guy.”

The bitter dispute between Obama and Warren on this issue represents something of a turnaround — as Politico points out, the two generally present a united front, especially on the issue of consumer protections. And if Obama were indeed to have made his comments based on gender bias, that, too, would be a significant character break. Because frankly, Obama hasn’t done too badly by the ladies during his term in office — and overt sexism certainly hasn’t been his style.

Obama’s first win for women came early on in his term when, in 2009, he signed the Lilly Ledbetter Fair Pay Act into law. The act effectively allowed women who were paid less than men for doing the same work to sue their employers — even if this discrimination had occurred many years previously. Despite that early success, he’s continued to campaign for women’s rights in the workplace. In his State of the Union speech this year, Obama championed paid parental leave, and added a push for equal pay. “Congress still needs to pass a law that makes sure a woman is paid the same as a man for doing the same work,” he said. “Really. It's 2015. It's time.”

The president took 2015’s International Woman’s Day as another opportunity to push for gender equality. “[W]omen make immeasurable contributions to our world,” he began, before calling women’s inequality “simply a matter of right and wrong,” and their maltreatment “one of the great injustices of our time.”

Obama’s trademark piece of legislation, the Affordable Care Act aka “Obamacare,” which was passed into law in 2010, also had significant benefits for women. Aside from the general benefits of the healthcare reform — which is designed to ensure universal health insurance — Obamacare covers preventative services such as contraception, gestational diabetes screening, and breastfeeding supports, at no additional costs. Maternity care is also incorporated, and the reform is designed to remove gender-based bias from the medical insurance industry. As Forbes notes, women were the “big financial winners” of Obamacare’s success.

There’s evidence to support the fact that Obama’s free community college initiative could also disproportionately help women, with a 2012 study showing that women with associate’s degrees have drastically increased earning power (a greater increase than that enjoyed by male graduates of the same degree). More recently, in a symbolic gesture of solidarity, the president has indicated his support for Women on 20s, an initiative to place a woman on the $20 bill.

In fact, quite aside from policy, Obama’s pretty good on the female public relations front. In his 2014 end of year press conference, the president answered only eight questions — all of which were from female journalists. The president’s pro-women push has earned dividends. In 2012, Obama owed his re-election in large part to single female voters, who overwhelmingly voted for him.

He’s also taken his fight for women’s equality overseas. In a speech to Indian students in Delhi earlier this year, he highlighted the importance of women’s empowerment. The comments came as India was reeling from well-publicized, and horrifically brutal, rape cases. “We know from experience that nations are more successful when their women are successful,” Obama said. “These are facts. So if nations really want to succeed in today’s global economy, they can’t simply ignore the talents of half of their people.”

Brown’s comments on Tuesday weren’t the first time Obama has been accused of sexist banter (in 2013, he jokingly referred to Kamala Harris as “the best-looking attorney general,” in a flippant remark for which he later apologised), but perhaps the real point to criticize Obama on, gender-equality wise, is the male-dominated make-up of his White House. A photo published in The New York Times eloquently demonstrated the man-heavy nature of the president’s inner circle. But a recent Bloomberg article suggests that, even here, Obama is making strides — with female White House aides (and, notably, pregnant ones) touting their good treatment in the administration.

Taken in this light, Obama’s comments on Warren seem like the criticisms of one frustrated and stone walled politician launched against another politician — an equal and worthy opponent, albeit one whose recent intransigence on the trade deal has possibly soured their relationship.