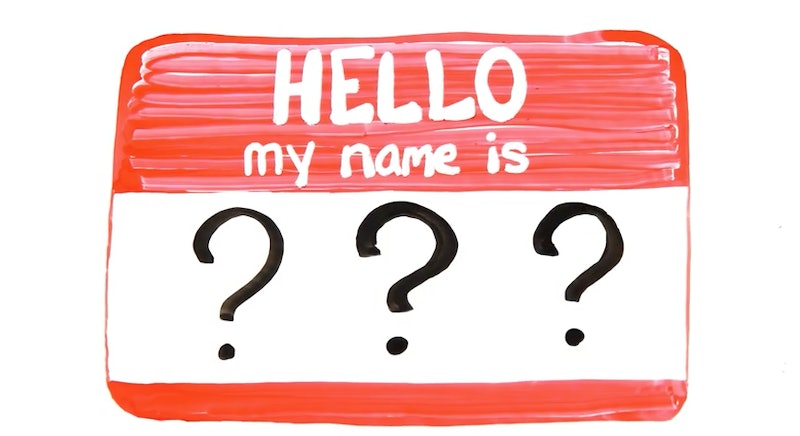 We know now a number of scientific reasons it's so hard to remember names, and you can rest easily in knowing that whatever side of the name-forgetting spectrum you fall on, it's probably not your fault. Brains are powerful yet selective creatures, and they're often going to make decisions of priority for you, whether you like it or not. Case in point, you might be meeting 10 new acquaintances at a party but only two of those are people you know for a fact you've seen before. Thus, they're probably going to be those you remember more aptly as your brain was previously familiar with them. This is just one explanation that our favorite scientifically inclined YouTube channel AsapSCIENCE highlights in their "Why Do You Forget Their Name" video. In the mean time, we've compiled a little cheat sheet that will provide you a crash course on the obnoxious habit and might make you feel just a little better about life.

You're much more likely to remember someone's face than their name. Our brains are designed with the connections to enable us to recall facial features and actions.

The scientific explanation for forgetting a name is called the "Baker Effect," essentially orbiting around the fact that names are arbitrary, not really providing our brains much to work with as far as mental links go, and thus rendering us far less capable of creating the ties we need to recall that name later on.

We're also much more likely to recall names that we already know or are familiar with. For example, I had a math professor in high school who called me Catherine. All. Year. He knew my name, knew that I wasn't Catherine, but he was a bit on the older side and hadn't previously been familiar with the name "Cecily," so his brain reached for the closest name it could muster.

Our ability to recall names is also hindered by what's known as the "Next In Line" effect, or that instance when we're meeting a new person, taking in as much as we can but also struggling to organize our own means of communication and to formulate sentences that are appropriate for that interaction. New introductions aren't easy, and so the loss of that person's name is somewhat facilitated.

Sadly enough, it's also true that often times we simply don't care to the point that we're willing to put the cognitive effort into etching a name to memory. Perhaps we consider ourselves as having larger issues at the time than to take on a new stranger or maybe we see no value in remembering this person because we don't anticipate running into them again. Whatever the case, a good amount of the time we can chock it all up to apathy.

Whether you're the type of person who always remembers names, consistently forgets them or is equally as often the one who is forgotten, take solace in that there are a number of explanations and it's probably not you - it's them.

For more on why people forget names, head over to AsapSCIENCE's YouTube channel.