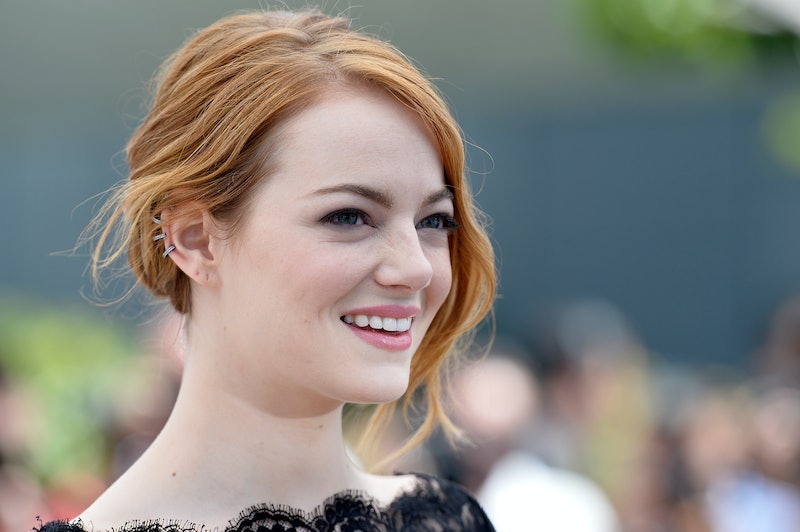 Emma Stone's fashion choices at Cannes this year are nothing less than impeccable. In all honesty, Stone rarely has a red carpet misstep, but she is absolutely killing it in France right now. Emma Stone's Cannes style is pretty much marked by two distinct and different dresses for Irrational Man events, with the actress choosing a dark and darling Oscar de la Renta frock and a long, light Dior column gown paired with a formal choker. Yep.

Stone's Oscar LBD was essentially a work of art, with a lacy top, sleeves that came just past the elbow and a full, ruffly skirt. In any other color, the detailing in this dress would have rendered it a bit too fussy, but given the ebony hue, it had an element of mystery and it popped against Stone's porcelain skin.

It was also somewhat voluminous but it never overpowered Stone's frame. She was wearing this gorgeous dress, not the other way around.

And judging from her coquettish poses while wearing it, all the while battling the wind, it's as though Stone knew she was stunning in a sophisticated offering by the late de le Renta.

I'm going to call it now. The LBD is not only one of the best looks at this year's Cannes; it's once of E. Stone's best looks ever. Yep, I said it.

Let's peep the dress from all angles.

It was so full and flirtatious.

It also let her legs be a focus feature. Here, you can see the ribbon-like detail of the bottom half of the frock.

Wearing an undone updo allowed her to show off the lacy back.

Doesn't she look thrilled to be wearing it?

Check out this better look at the back.

That skirt has some serious movement, too, thanks to the wind. Notice the two-toned shoes, too? Quite a detail.

You can appreciate the lace detailing here. And E's sly smile, of course.

The scalloping of the neckline... so pretty!

Up close with the hemline!

A final side view. I can't stop gawking at it. It's such a great style for a wedding or a prom, even though poor Emma had to hold it down, thanks to the gusts.

Now, about the silk crepe and lace gown from Dior? It's bone-colored in my eyes, but Dior described it as "pale green" in a press release.

It doesn't get any more ladylike than this column dress. Is it me or does Stone once again channel the grace and class of fellow ginger Nicole Kidman?

The train is deceptively simple, since you can see the netting here, and the dress looks totally different from this angle.

Thanks to her entirely exposed, low-dipping back and the flow of the train, Stone adopted a mermaid pose.

And there's that fancy choker I was talking about! So amazing.

As was Stone's chignon.

Even though this Dior Haute Couture dress was likely difficult to walk in, Stone floated on the red carpet.

Once more, with feeling.

OK, so who else besides me is green with envy over the dresses Emma Stone gets to wear?