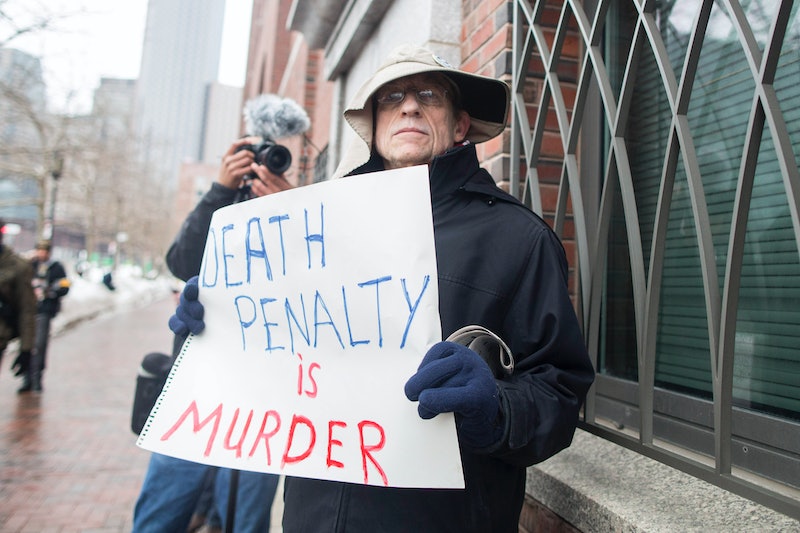 A federal jury sentenced Dzhokhar Tsarnaev to death by lethal injection on Friday for his role in the 2013 Boston Marathon bombings, which killed three people and caused 17 others to lose their limbs; in all, nearly 300 people endured injuries. The sentencing verdict came nearly one month after the same federal jury convicted the 21-year-old on all 30 counts — 17 of which carried the death penalty — against him. Although Tsarnaev was sentenced to death on just six of those 17 counts, he still faces death row, barring an appeal by his defense team.

The young, would-be University of Massachusetts Dartmouth graduate is the first person given the federal death penalty since Oklahoma City bomber Timothy McVeigh in 1997. He will be transferred to a federal prison, most likely the United States Penitentiary, Terre Haute, where McVeigh was also executed.

But, of course, Tsarnaev's defense team will appeal — a not-so-unusual move for those sentenced to the federal death penalty. According to the Death Penalty Information Center, there are currently 20 federal inmates sentenced to death waiting for pending appeals. To this day, only three people have been executed under the federal government since the United States reinstated the death penalty in 1988. The last execution of a federal death row inmate occurred in 2003.

So, what will Tsarnaev's appeal look like, and how long will it take?

Keep in mind: Although a jury has sentenced Tsarnaev to death, the sentenced hasn't been formally imposed. U.S. Judge George O'Toole Jr. will schedule a formal sentencing hearing, where Boston Marathon bombing victims can make "impact" speeches. Tsarnaev will also have the option to make a statement here as well.

According to criminal defense attorney David Hoose, don't think O'Toole won't formally sentence Tsarnaev to the death penalty. "The law makes clear that the judge must follow the recommendation [of the jury," Hoose told The Boston Globe.

The continued sentencing period for Tsarnaev may last about three months, coming to an end in late summer or the fall. This sentencing period allows more "post-motions" from Tsarnaev's defense team, including any indication that the jury was impacted by outside influences or if any jurors were untruthful on their forms, Hoose told WBUR.

When the appeal comes, Hoose said a new defense team will be assigned to Tsarnaev. The criminal defense attorney explained to WBUR:

There will certainly be an appeal and there will be a new defense team appointed for purposes of handling that appeal. So there’s going to be a little bit of time of transition [in] the case [with] the huge amount of documents and electronic data that this defense team has in its possession onto a new defense team. It will obviously take a little time to find lawyers with the time and skills to take on something as enormous as an appeal of this case.

Legal experts say there will be "years" of appeals now that a federal jury has sentenced Tsarnaev to death, but just how many years will it take? According to The Guardian, the bomber's appeal process could take about a decade. Yes, 10 years.

While it's impossible to predict at this moment the exact length of Tsarnaev's appeal, it's safe to assume that the young naturalized American from Chechnya will be hanging out on death row for years — unless his appeal is fast-tracked, as it was in the case of McVeigh. The Oklahoma City Bomber was executed within four of his sentencing — a rarity among federal death row inmates. Since McVeigh's execution in 2001, just two other federal inmates have been executed.

Judy Clarke, Tsarnaev's lead defender, will likely appeal her client's verdict on one of these grounds: that her client wasn't able to receive a fair trial, because the trial wasn't moved out of Boston or Massachusetts; or that the defense team wasn't given enough time to mount a sufficient case for their client. The Boston Globe reported that Clarke and her team may also appeal on the basis of the constitutionality of the death penalty — a much more broad approach.

The Boston Globe added that the U.S. Court of Appeals for the First Circuit in Boston will review all of the appeals in the case. These appeals could eventually make it up to the U.S. Supreme Court.