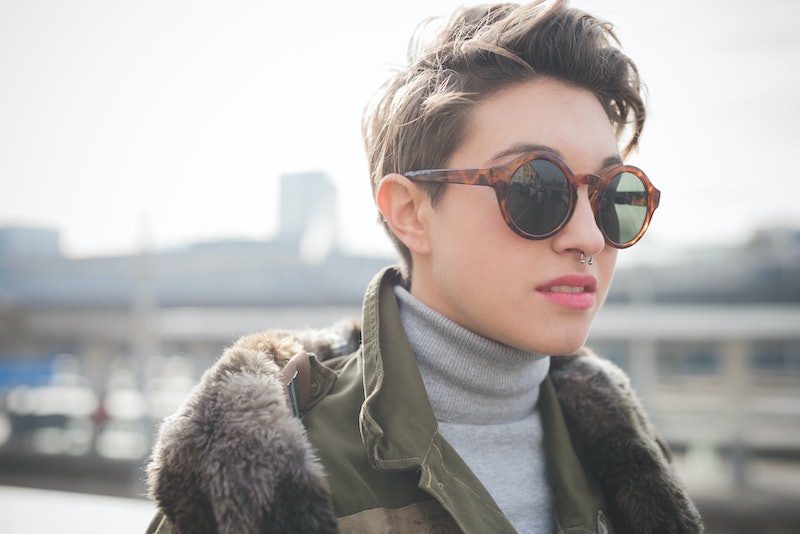 If you're anything like me, then you passionately advocate for gender equality while wearing a full face of makeup and a cute dress because you realize the intersection of fashion and feminism runs strong. But some out there may initially perceive feminism and fashion to be polar opposites, so can you really be a feminist and love fashion at the same time? Well, I know you can.

Let's first look at the definition of feminism to give this some context. According to Merriam-Webster, feminism is defined as "the theory of the political, economic, and social equality of the sexes" and "organized activity on behalf of women's rights and interests." So, feminism is essentially believing that all genders are equal, and working to create that equality in the world. And personally, I don't see how fashion has any conflict with believing in equity or fighting for it.

There are definitely still a lot of stereotypes about feminists that chalk up our anger at an unjust world as the sole cause for some of us choosing not shaving our legs, wear bras, or don makeup. While you could argue that all of these things have been a part of the patriarchy or reinforce the gender binary, it doesn't make the decisions to wear a bra, put on makeup, or shave your legs bad ones. Feminism is giving women agency to choose — that's the whole point! — meaning that an ideal world would give women and men the power to choose to do any of these activities, or not, without social consequences. Also, not all feminists are hairy-legged and braless; many women choose to do these things for themselves rather than as a means to cater to the male gaze. Assuming women do these things to get men's approval or attention is actually sexist, not to mention heteronormative, bro.

While I could probably write an entire article about this point alone, I'll restrain myself and stick to a list of 11 reasons why fashion and feminism don't clash.

1. Feminine Is Not Anti-Feminist

Feminists are often stereotyped as predominantly non-makeup wearers, and many of the stereotypes that do exist place feminists into this box of being masculine-presenting or androgynous. Even within the movement, there sometimes remains an assumption that anything airing on the feminine side is sexist and something created by the patriarchy that must be avoided. Femininity, however, is feminist, as it's about, well, women.

Isn't embracing womanhood a feminist act? Zooey Deschanel certainly thinks so, as proven by one of her most famous quotes to date: "There is not an ounce of me that believes any of that crap that they say. We can’t be feminine and be feminists and be successful? I want to be a f*cking feminist and wear a f*cking Peter Pan collar. So f*cking what?”

The underlying assumption that goes on when saying that feminism and fashion don't mix is that fashion is stereotypically feminine and all feminists should avoid this massive cultural belief.

While it is true that women shouldn't be pressured into being "fashionable" or loving fashion if they don't, fashion itself is not just a "girl thing." Guys can be fashion lovers, too! And assuming that fashion is only something women have an interest in further reinforces gender norms, which are cultural beliefs associated with how someone should act or behave according to their gender. Gender norms keep us all in boxes when the goal of feminism is to break free of these limitations.

3. Feminism Is About Liberation

Women have been given the less autonomous position in society and have historically not had access to choose the direction of their lives, as women have been considered to be the property of their fathers and/or husbands throughout our history. This is why at weddings, it's tradition for fathers to walk their daughters down the aisle, as in the past this symbolized the father handing off his property to its new "owner."

Feminism has only expanded the options and choices that women have, and this goal is at the heart of the movement. Thus, having the choice to wear the clothing you want and determine your own aesthetic without being shamed or ridiculed is a very feminist philosophy. So, encouraging women to wear what they want and embrace the fashion of their choosing without judgement is in line with feminism.

4. Fashion Doesn't Have To Be Patriarchal

Another popular line of thinking surrounding fashion and feminism is that fashion as we know it today is mostly controlled by men and focused on sexualizing women's bodies for their supposed pleasure. While the problem of objectification is indeed an issue in our media, we don't have to follow those rules in our own sartorial lives.

We can wear clothing that shows off the parts of our body that we want to show off; we can cover up; we can focus on style that is feminine, masculine, or none of the above. The idea that women wear clothing to please men in the first place is completely not within feminist thinking to begin with.

5. Embracing The Feminine Can Be Very Feminist

Just like I said that femininity is not anti-feminist, embracing the feminine in your appearance can actually be a political act. Since our society devalues femininity, showing that you yourself embrace and value the feminine can be a powerful way of talking back to this oppression. Wearing dresses, makeup, high heels, and donning manicures are all considered to be feminine ways of presenting, so embracing them is a way of saying that you love womanhood and how it looks on you.

6. Fashion Has Been Vilified Because Of Its Connection To Womanhood

When you think of someone who loves fashion, what qualities do you think that person may have? Do you think of them as vain, prissy, shallow, or superficial? If you live in this society, you probably do, since "fashion" often comes with several negative connotations.

Fashion is sometimes still seen as unnecessary, a waste of time, and something best left to those who have nothing better to do. Going a little deeper, think about the qualities of vanity: Are those usually associated with men or women? If you said "women," you'd be right, and if you didn't, what planet are living on? But in all seriousness, vanity is something heavily attributed to women, so this vilification of fashion that is also connected to those qualities is directly tied to its femininity.

7. Women Are Judged For How They Look

Sadly, we are still living in era where female political candidates are judged on their merit based on the color of their pantsuit and the length of their hemline. Women are given all kinds of mixed messages about how they should look, and judged for how they dress when men aren't — making fashion a huge window into how modern day sexism looks. Feminism can thus be used to point out these inequalities when it comes to appearance and gender.

8. How We Dress Often Is Used To Justify How We're Treated

Anytime a woman is called a "slut" because of how she's dressed proves the need for feminism. Women are critiqued much more harshly than men for what they're wearing and what skin they are or aren't showing, which is sexism, guys. Because of this, clothing has the ability to make social and political statements, and also demonstrate how women's bodies are policed on the regular.

10. Fashion Is Leading To Career And Economic Empowerment for Women

With the advent of fashion blogging, any woman with an eye for color and an Internet connection can enter into the world of fashion and make not only a name for herself, but a career. Think of individuals like Gabi Gregg, Tavi Gevinson, Ingrid Nilsen, and Julie Sarinana, who have used their passion for fashion to build their careers. This has also been true throughout history, as companies like Avon and Mary-Kay Cosmetics were developed by women who wanted to be financially independent. This is a powerful tool we can use for our own personal feminist liberation!

11. We Can Be Its Biggest Influencers

As Minh-Ha T. Pham wrote in Ms. Magazine, "If feminists ignore fashion, we are ceding our power to influence it." This couldn't be more true and as feminists, we should be seeking to make our mark using fashion, not abandoning it. Let's take the opportunity to be influencers and use our style to create gender equality.