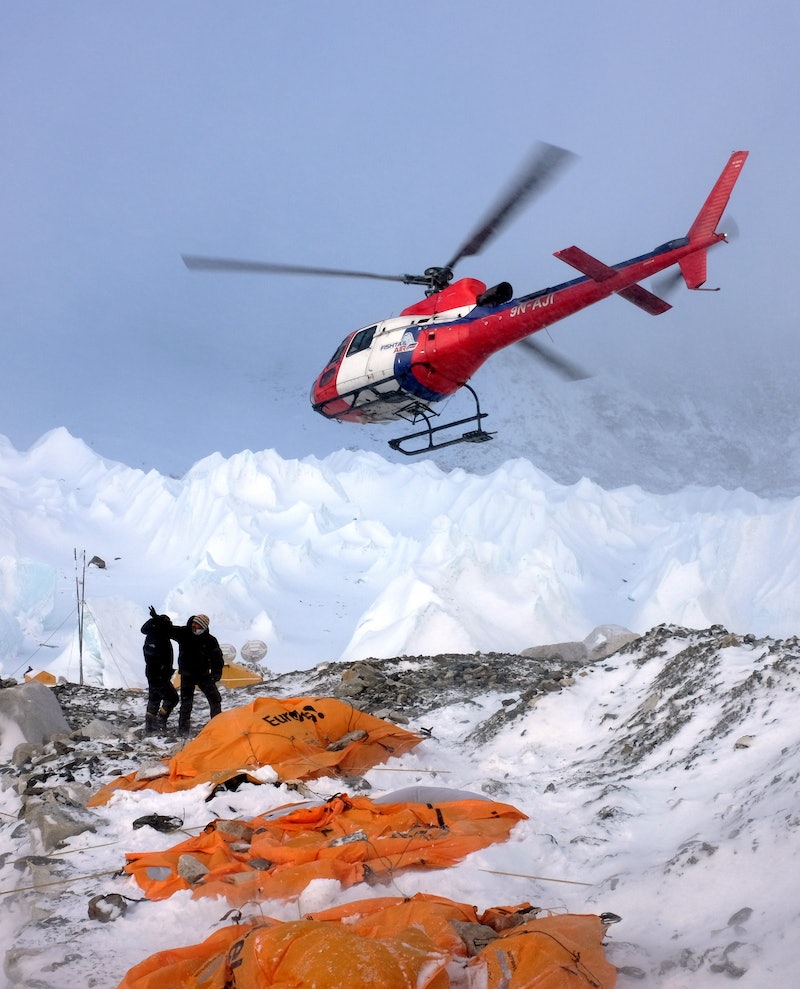 Days after the wreckage from the helicopter crash in Nepal was first spotted, officials have released the names of the Nepal helicopter crash victims. On Sunday, officials identified six United States Marines and two Nepalese soldiers who were aboard the crashed UH-1 Huey helicopter that was delivering earthquake relief supplies. According to a statement from the United States military, the marines aboard were Capt. Dustin R. Lukasiewicz from Nebraska, Capt. Christopher L. Norgren from Kansas, Sgt. Ward M. Johnson IV from Florida, Sgt. Eric M. Seaman from California, Cpl. Sara A. Medina from Illinois, and Lance Cpl. Jacob A. Hug from Arizona. The Nepalese Army identified its soldiers as Tapendra Rawal and Basanta Titara.

At this point, the cause of the crash remains under investigation. The helicopter reportedly went missing on Tuesday, after an earthquake once again struck Nepal — this one just weeks after the second quake. The helicopter was delivering supplies nearby the earthquake epicenter. According to The New York Times, American, Nepalese, and Indian teams were involved in the search for the missing helicopter, which was finally spotted on Friday. However, relief efforts were hampered by intense weather conditions and the area’s mountainous terrain.

So, just who were these eight people who lost their lives trying to save the lives of others’?

Lukasiewicz was one of the pilots aboard the helicopter. According to a report by Fox 5, a family member told Lukasiewicz's hometown Nebraska newspaper that Lukasiewicz and his wife had one child and were expecting another child in just a few weeks. Days before the crash, Lukasiewicz narrated a military video shot in Nepal, in which he said: “…we stand with the people of Nepal.”

Norgren was another pilot aboard the helicopter. According to Norgren's father Ron, he “loved to fly and he loved to help people.” At a press conference on Friday, Norgren’s parents called him an overachiever; to them, they said, he was their hero.

Johnson was a graduate of Seminole State College of Florida, where he received an associate’s degree in automotive service management and in the arts. He enlisted in the Marine Corps in 2009, and was deployed to Afghanistan before being deployed to Nepal.

According to the Los Angeles Times, Seaman was a crew chief from Southern Riverside County in Southern California. A Riverside veteran said of Seaman, “He volunteered with the service, so that makes him a hero automatically.”

A combat photographer assigned to Marine Corps Installations Pacific, Medina was capturing photos of the Marine Corps’ relief efforts in Nepal. She had previously been deployed to photograph Marines in South Korea, the Philippines, Japan, Australia, and the United States.

According to Hug’s family, the Phoenix native worked as a combat videographer. He was capturing images of the Marine Corps’ relief efforts in Nepal.

Rawal was a captain for the Nepal Army. He was aboard the helicopter as a liaison officer.

Titara's official title in the Nepal Army was Warrant Officer.