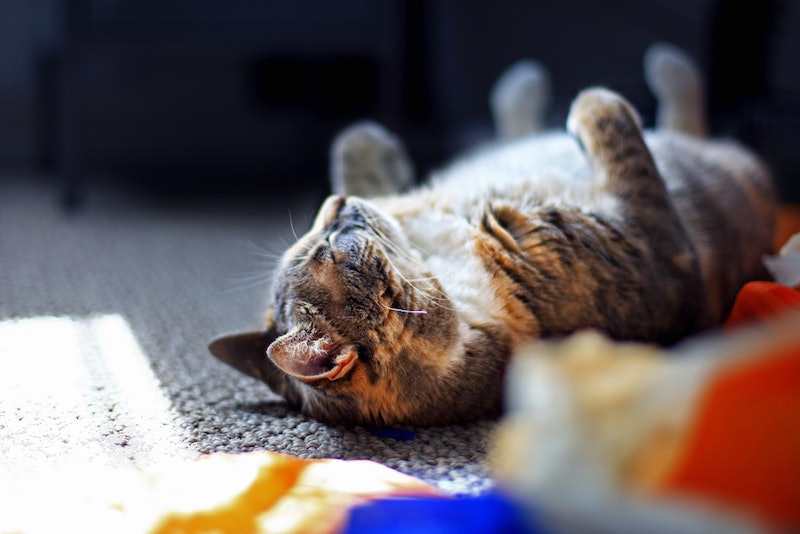 There are two kinds of people in the world: those who rise with the sun and have a bedtime earlier than their grandmother's, and those who only ever see morning light from the other side. It's a divide that's ruined many a roommate relationship, and according to a recent study, you now have someone to blame. Whether you're a morning person or a night owl depends on your genes, researchers at the University of Leicester believe, so next time you miss class because you stayed up until 4 a.m. again, or you bail on a party super early because staying up past midnight requires a minimum of three Red Bulls, you know where to point the finger. God, Mom, couldn't you have married someone with a normal sleep schedule?Well, you actually might want to hold off on the parent-blaming for a little while. The study was conducted using fruit flies rather than human gene sequencing, so the results aren't 100 percent applicable to humans. According to researcher Dr. Eran Tauber, however, flies have gene clocks that are "very similar to human," and it's likely that "some of the genes that we have identified in flies would be also important for diurnal preference in humans." So no, you don't have to turn yourself into Jeff Goldblum in The Fly for the study to apply to you, which is probably for the best.

Researchers first identified genes associated with "morningness" and "eveningness" in the flies, based on when the insects emerged from their pupal cases in the wild, Science Daily reports. The flies that emerged in the morning were identified as "larks," and the ones that tended to start their days a little later were called "owls." Scientists then used RNA sequencing to identify gene expression across the flies' genomes. In the end, they found almost 80 genes that differed between the "larks" and "owls," which they believe accounts for the difference in lifestyles.

Interestingly, the gene expression wasn't just on a different timer, so to speak, for the late risers. “The molecular processes in the Owls are not merely delayed compared to Larks, but are entirely different," Dr. Tauber explained. "Once a gene expression is delayed (in Larks), a completely different cascade of molecular events is carried." Furthermore, the identified genes were associated with various molecular processes, which gave lead researcher Dr. Ezio Rosato reason to believe that our body clocks less of a "pacemaker" and more of a "time reference system."

Previous research has shown that circadian rhythms can be influenced by the environment — specifically, by differences in light and dark cycles. Unfortunately, people are spending more and more time indoors, so our body clocks can be on an entirely different cycle than what our social and work lives demand. As Dr. Tauber points out, this discrepancy can lead to weight gain, mental illness, and, of course, sleep disorders. For example, many studies have shown that teenagers, who have naturally delayed circadian rhythms, are frequently sleep deprived in the U.S., but they're more alert in school when their days start later. In fact, the Centers for Disease Control list our round-the-clock lifestyles as one of the reasons for the national sleep deprivation epidemic.

Dr. Tauber hopes that this research will help treatment of this "clock dysfunction." "Our study is the first stepping stone to identifying which genes are involved... This will allow better diagnostics, and ultimately personal medicine," he said.

In the meantime, try listening to your body's natural rhythms. If you get tired at 10 p.m. every night but fight to stay up until 2 a.m. anyway, it's probably time to start going to bed a little earlier. Netflix will still be there in the morning.

More like this
16 Valentine’s Day Quotes About Chocolate That Will Make You Hungry
By Emma Cueto
21 Galentine’s Day Memes To Celebrate Your Best Friends
By Meghan Bassett and Mia Mercado
23 Super Sweet Things To Write In A Valentine's Day Card
By Karen Belz and Lexi Inks
Here’s What TikTok's "Mascara” Trend Is *Really* About
By El Hunt
Get Even More From Bustle — Sign Up For The Newsletter
From hair trends to relationship advice, our daily newsletter has everything you need to sound like a person who’s on TikTok, even if you aren’t.