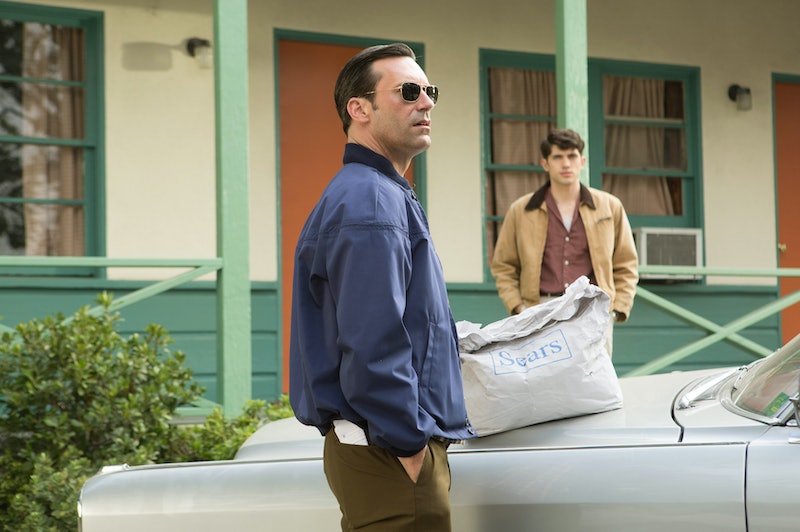 What are we going to do without now without Sally's sassy quips? Mad Men 's series finale, "Person To Person" was memorable quote central, which only makes it harder to say goodbye to the show. The episode, written and directed by Mad Men's creator, Matthew Weiner, delivered on all fronts, from characters we haven't seen in seasons, to characters we're familiar with reconciling. With those things, of course, the dialogue was nothing short of phenomenal, of course. It's going to be hard to keep living my life like Peggy Olsen if I don't have quotes from her to insert into everyday life.

The action in the episode picks up a little while after we last saw Don Draper, sitting by the side of the road, trying to figure out what he's doing with his life. He's still trying to figure out what to do with his life, and the first best quote of the episode might simply be the zoom zoom of the car he's speeding through the desert in. (Why didn't anyone think to put Don in a fast car before this?) No one's seen him at the office, so the first best quote of the episode has to go to Meredith, Don's secretary, who's now Roger's secretary, who thinks Don is dead.

But that's not the only gem this episode boasts. You know Mad Men's parting shot would do better than that, don't you?

"There are a lot of better places than here." — Meredith, believing that Don is dead, and that he's in a better place.

"I translated your speech into pig latin." "That was a joke" Meredith to Roger, who needs to get more specific with his instructions.

“Oh that’s fast. I feel like someone just gave me some very good news." After she tries cocaine for the first time.

"I'm sorry, I already went to high school." Don, being sassy to Sally for the first time ever.

"Oh wait, Don, when was the last time you saw them" Betty reminding Don that he needs to step up his father game.

Roger's Girlfriend Is From Canada

"They taste like le shit." Roger, on Canadian food.

"Yell at me slower. Or in English!" Roger, about the French language.

"I met her through Megan Draper. She's old enough to be her mother. Actually, she is her mother." Roger, explaining how he met Marie.

"I really thought you'd be on a beach by now." Peggy, wondering why Joan's still in the city.

"Harris-Olsen." Joan, thinking out loud about the company Peggy and her will one day run IN OUR DREAMS. If I could include that high-five emoji here, or like that red 100 underlined, I'd do it. That's how Harris-Olsen makes me feel.

Has The Peggy And Stan Ship Sailed?

"You have no ambition." Peggy said to Stan. "I'm just very happy being good at my job." Stan said to Peggy.

"Spoken like a failure." Peggy said to Stan, and do you hear that? It's my heart breaking. "I said the opposite of that!" Stan, trying to smooth things over with Peggy.

Nope, The Peggy And Stan Ship Is Here Forever!

"Every time I'm face to face with you I want to strange you. And then I miss you when I go away. And then I call you on the phone and I get the person I want to talk to. But when I'm standing in front of you, I bring out something terrible. I think about how you came into my life and how you drove me crazy. And now... I don't even know what to do with myself. because all I want to do is be with you." That one time Stan professes his love to Peggy over the phone.

"I don't know what to say. I feel like I can't breathe. I don't even think about you. I mean, I do, all the time, because you're there. And you're here [touches heart] and you make everything OK. You always do. No matter what. I mean I must be.... Because you're always right. I can't believe this. I think I'm in love with you too. I really do." That one time Peggy realized she was in love with Stan. Awww.

And with that, we must accept that this great show is really over. Either that or we can just watch the whole thing over again.

More like this
'The Last Of Us' Has Officially Been Renewed For Season 2
By Darshita Goyal
Netflix Shut Down 'Bridgerton' S3 Rumours About A “Very Dark” Storyline
By Bustle
Bill & Frank’s 'The Last Of Us' Episode Has Twitter Emotionally Wrecked
By Alyssa Lapid
This 'Gossip Girl' Wardrobe Error Has Gone Viral On TikTok
By Alyssa Lapid
Get Even More From Bustle — Sign Up For The Newsletter
From hair trends to relationship advice, our daily newsletter has everything you need to sound like a person who’s on TikTok, even if you aren’t.