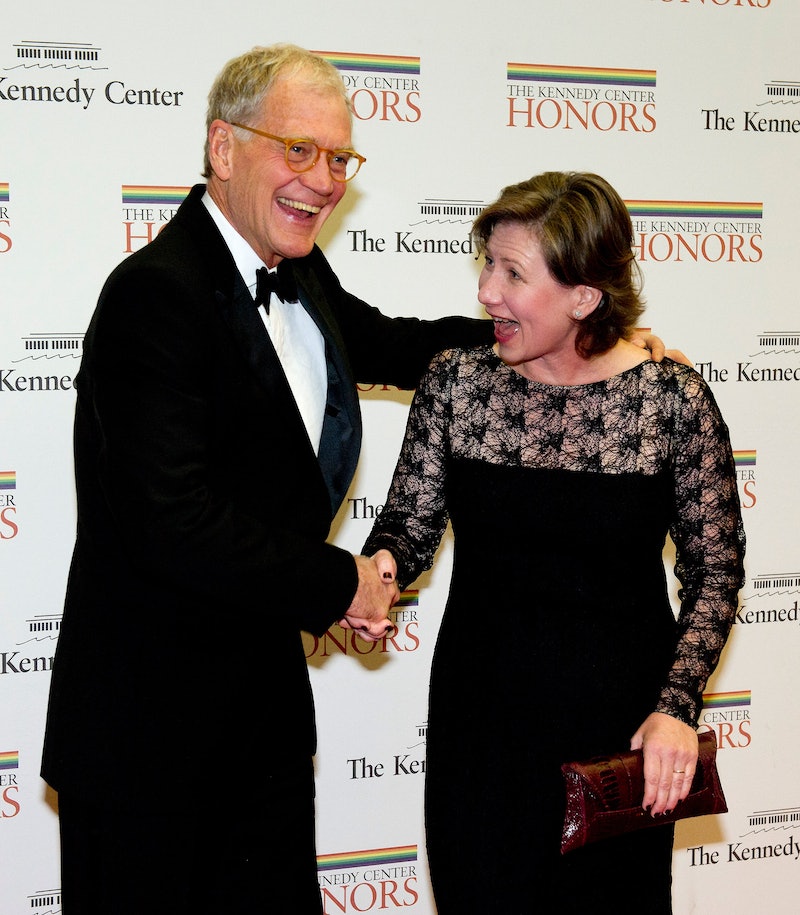 Way back in April 2014, television legend David Letterman announced the seemingly impossible: he was going to retire in 2015. Many of us grew up watching Letterman's show and throughout the years have seen him interview some of the most important figures in our culture. He hosted The Late Show for 21 years, and when he leaves on Wednesday night, there's a good chance David Letterman will thank his wife, Regina Lasko. While Letterman's life has been public for years, not as much is known about Lasko, so it's time we find out more.

As you might recall, in 2009, Letterman was caught in the middle of a sex scandal, which threw his personal life out of balance. In the midst of that crossfire, much attention was paid to his wife who he publicly apologized to on the show.

The two were only married on March 2009, six months before the scandal came to light, and were not seen together in the months following. But since then, Letterman and Lasko have seemed to work past all of the negative turns in their life and seem to be committed to the relationship they've had since 1986. Here are some things to know about the lady behind one of the most notorious and loved television personalities in history.

She has worked in broadcasting

Lasko was a staff member on The Late Show when the couple met. In a recent profile with Rolling Stone , Letterman spoke a little about how his wife deals with his public persona, saying,

She's very smart. She worked in broadcasting, so she knows everything I do here. And in addition to being a practical combination, we just have a lot of fun.

They dated a long time before they got married

The two started dating in 1986, nearly 10 years after his divorce from his first wife, Michelle Cook. They were together for 23 years before they got married!

They have one child together

Lasko had their first, and only, child, Harry Letterman, in 2003.

She laughs at his old jokes

When you're with a comedian for over 20 years, I'm sure it gets tiring to deal with all of his antics. Letterman pointed out Lasko has supported him throughout their marriage. He told Rolling Stone,

Harry and I have a lot of fun making fun of her, and she has a lot of fun pretending to be outraged. And I know she's sick of all my jokes. But she has been excellent company and has readily played along with the nonsense and bizarre stuff that the family has done. And the best part of it all is that we're still together — when I came very, very, very close to having the whole thing explode on me.

She's not athletic, but that's OK

In his Rolling Stone interview, Letterman shared a cute tidbit about Lasko that says a lot about their life as a family. He told the magazine that Lasko is "not very athletic," and was pretty terrible at skiing, but once she saw that it was something her husband and son loved to do, she joined them to make that a family activity, which Letterman says is invaluable.