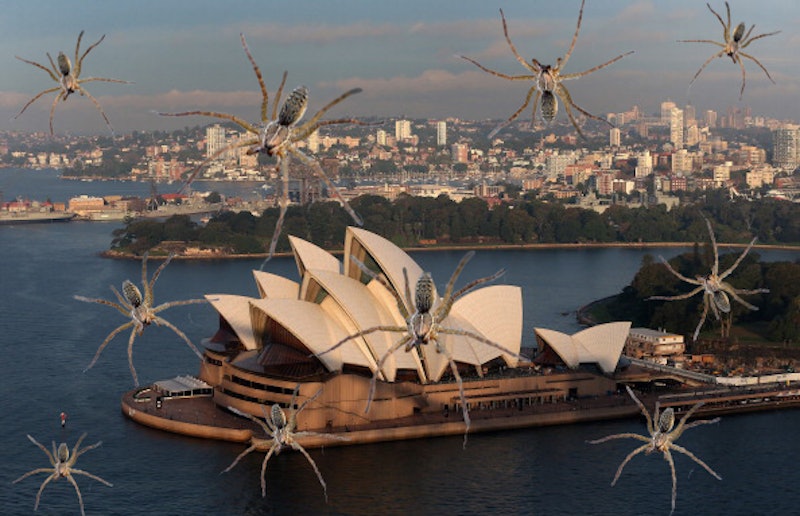 Even if you're not an arachnophobe, this is your worst nightmare. If you are an arachnophobe, then you might not want to read further lest you go into cardiac arrest. Over the last few weeks, reports revealed that millions of spiders rained down in Goulburn, Australia, leaving the city covered in a blanket of cobwebs and baby spiders. This skin-crawling scene might sound like a sign of the Rapture, but it's actually associated with a migration technique used by spiders. But just because it's a natural phenomenon doesn't make it any less terrifying.

When word got out about this spider shower, multiple local newspapers interviewed residents of the Southern Tablelands city, who described a scene out of an apocalyptic horror movie. Goulburn resident Ian Watson told the Sydney Morning Herald:

The whole place was covered in these little black spiderlings and when I looked up at the sun it was like this tunnel of webs going up for a couple of hundred metres into the sky. ... You couldn't go out without getting spider webs on you. And I've got a beard as well, so they kept getting in my beard.

What was that? Did you just feel something crawling down your neck, too?According to the Herald, another resident experienced a similar event, describing the event on her Facebook

Around the 27th April we experienced this and thought we were been invaded by spiders for two days. ... Every time I'd walk outside my feet would get covered in very fine cobweb-like substance and the clothes line and clothes were absolutely entangled in it.

Another local experienced the event on May 4, calling the 30-minute shower "quite amazing."

Whether or not this is any form of comfort or consolation, the spider rain is actually a mundane migration technique called "ballooning," predominantly used by baby spiders. The little guys will climb to the top of a tree, release a banner of silk, and float with it in the air getting transported great distances.Naturalist Martyn Robinson from the Australian Museum explained the phenomenon to the Herald:

They can literally travel for kilometres ... which is why every continent has spiders. Even in Antarctica they regularly turn up but just die. ... You can have entire fields and paddocks and trees festooned with this gossamer or Angel Hair, as some people call it.

As spine-chilling as these Angle Hair events sound, Robinson insists that they're "nothing to worry about."

They'll all disperse once the weather conditions warm up.

Um, that doesn't really settle my nerves. Because they still exist, and their next ballooning destination might be Brooklyn, New York. Believe it or not, however, baby spiders are not the weirdest thing that's ever fallen from the sky. Take a look at the five most bizarre rainfalls in history.

Just like spiders, frog showers may sound like a foreboding Biblical curse, but it's also part of a natural phenomenon. Waterspouts, which are basically water tornadoes, sometimes lift frogs up by the hordes, displacing them and then dropping them from the sky when the vortex dies down. You might have actually seen raining frogs in your lifetime — well, on screen at least, in the Paul Thomas Anderson movie Magnolia.

Waterspouts were also the likely causes of two worm showers, one in Galashiels, Scotland, where a group of students were pelted during a soccer match in 2001, and another in Jennings, Louisiana, where a woman was struck by worms in 2007.

But perhaps the strangest thing that has fallen from the sky as a result of a waterspout is not something living at all. In 1969, residents of Punta Gorda, Florida, were showered with "dozens and dozens and dozens" of golf balls.

This is pretty gross. In 1876, a Kentucky woman was in her backyard making soap when chunks of meat started raining down around her. The Louisville Commercial reported that "two gentlemen who tasted the meat expressed the opinion that it was either mutton or venison." Scientists concluded that the "only plausible theory" was "the disgorgement of some vultures that were sailing over the spot." In other words, a bunch of vultures threw up the sheep carcass they had just eaten.

Now this is a freakish rain shower I can get behind. There have been several instances of money falling from the sky, from thousands of 1,000 franc notes falling on Bourges, France, in 1957 to $1 bills falling onto lucky bystanders in Chicago in 1975. In 1968, the English town of Ramsgate witnessed pennies falling from the sky. They were dented, even though there were no airplanes or tall buildings from which they could have dropped.