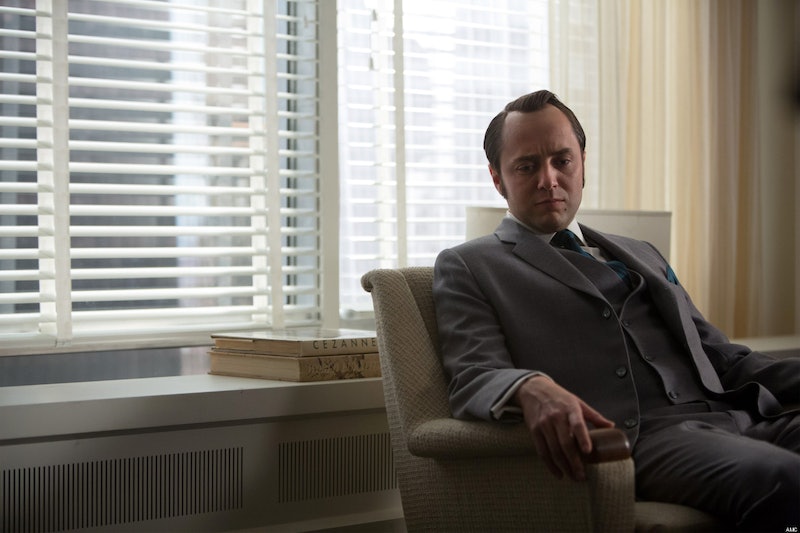 The admen of Mad Men are founded just as deeply in the television shows they garnish with commercials as they are in the work itself. In-universe, we know it from Mad Men's Don Draper's proud affirmation that he has “seen everything,” and his castigation of underlings for missing the network lineup. Out-universe, we see it in the way Matthew Weiner treats his subjects, with situation comedy tradition in mind. Particularly that of the era of television they’d all be watching, though with influence by a few genre kingpins (like Three’s Company, the sitcommiest of sitcoms) yet to reach the world.

From the creative impetus that led our species to etch stories of survival into cavern walls and depict the likenesses of gods on chapel ceilings and plunge into the depths of human desperation via accounts of painstaking whale hunts, we got Three’s Company. Somewhere along the way, art met commerce, and the notion of telling stories about people gave way to telling stories for them. And, ultimately, telling stories to them, for whatever network or studio or cigarette company is looming behind the curtain. It’s not entirely cynical; we’ve gotten a lot of great things that way. Friends, for instance, which is as much a commercial for American adulthood as “I’d Like to Teach the World to Sing” is for carbonated soft drinks.

We’ve seen the farce intrinsic in everything from I Love Lucy to Friends befall the likes of Don and company, taking form across a spectrum that extends between unexpected pregnancies — with Peggy’s situation working out not quite like Rachel Green’s — musical numbers, slapstick instances of bodily harm (lawnmower accidents, people getting shot in the eye, and domestic stabbings), and dead secretary cover-up. But we never quite got the light and lilting feeling we do from watching your average network half hour, because Sterling Cooper wasn’t exactly operating within said world. With Mad Men, Matthew Weiner was filtering a lifelike planet Earth and its people — people built with genuine humanity — through sitcom formulae.

That’s how we come to something like the finale of Mad Men, which many have taken to task for being… well, it’s not entirely clear what the general opposition’s issue is (which I think is part of what the general opposition’s issue is). After seven seasons of watching these inscrutably affectionate walking corrosions suffer through their own misgivings and malfeasances, we see the lot of them wrapped up in a happy endings montage that we’ve seen cap network finales time and time over.

We’ve been couriered from one delightful bow to another in the conclusive broadcasts of shows as sentimental as Friends, as heartily sardonic as 30 Rock, as wet-eyed and earnest as Monk. Though not a sitcom in the most didactic of terms, I wouldn’t be surprised if Weiner studied the detective show’s finale montage tirelessly before shooting his goodbyes to Pete and Trudy, Roger and Marie, Betty and Sally, Joan and her new business, and Peggy and Stan.

But there’s a distinguishing factor in the fond farewells that we bid to the aforementioned couplets that reminds us what type of show we’re dealing with. We don’t leave any of these stories independent of the feeling of flux — no one will be left static in his or her position, smiling on an airport runway or smoking glumly in a kitchen. Funny, since stagnancy has always been the name of the game for Don Draper. But for his compatriots — Roger speaking wry French and Peggy enjoying a Rockwellian forehead kiss — we expect things to bounce back and forth. We’re not leaving Peggy on the assumption that Stan’s insertion into her romantic life has rendered everything peaches and cream. Peggy is as convoluted, contentious, and eternally wanting as her beloved mentor. Things will continue to rock. Hell, she may even stab this one too.

At second glance, Mad Men’s ending hearkens far closer to another famous sitcom finale: Cheers, widely considered one of the best last episodes of television in the history of the medium. How did Cheers end? With everyone going about their business, continuing to be the same incomplete people they always had been. Mad Men sends Pete off to Wichita, Joan aboard her own business venture, and Roger into a third marriage. Victories for the lot of ‘em, sure, but any one of them would be kidding to expect smooth sailing from here on out. These aren’t sitcom characters after all, Weiner labors to remind us with this ending. They’re what real people are like.

Hammering this home is Don Draper, pulled up from the rock bottom by the intimacy afforded to him through the “free love” movement, directly at the behest of a very specifically unimpressive man, laid at last to relief on the California shores only to transform all of it — his salvation — into the next big pitch.

It, perhaps even more so than those of his colleagues, is an ending suggesting turmoil yet to come. Don has spent the 1960s in decline, professionally and emotionally. He’s hit it big here and there over the course of the decade, both in the boardroom and in his personal life. He’s plummeted catastrophically from almost all of these victories. And he’s clawed back up, in one or another, after each falter. So… here’s that again.

Are we supposed to be unsettled by the future yet to befall the former Dick Whitman? Of course — we’ve seen it! But in that, we know he can make it. He and his likewise noxious business pals can go on surviving through the muck of their own emotional maladies. It’s not simply a departure from the “sitcom finale,” it’s a conscious rejection of it. It’s the dismissal of the very idea that a television character’s story may be capable of ending. They might live in a world that belongs to the breed of the network half hour, but they all hail from our side of the screen.

As such, Matthew Weiner does something special with the Mad Men finale. He takes the American sitcom, itself a glorified commercial, and gives it back to us. Once again, it's art about people. Mad Men wraps up with one of modern art history's most impressively honest illustrations of humanity, with all its inherent flaws and weaknesses and abjections and inclinations to move back to New York. And really, it is not entirely cynical. After all, we’ve gotten a lot of great things this way.