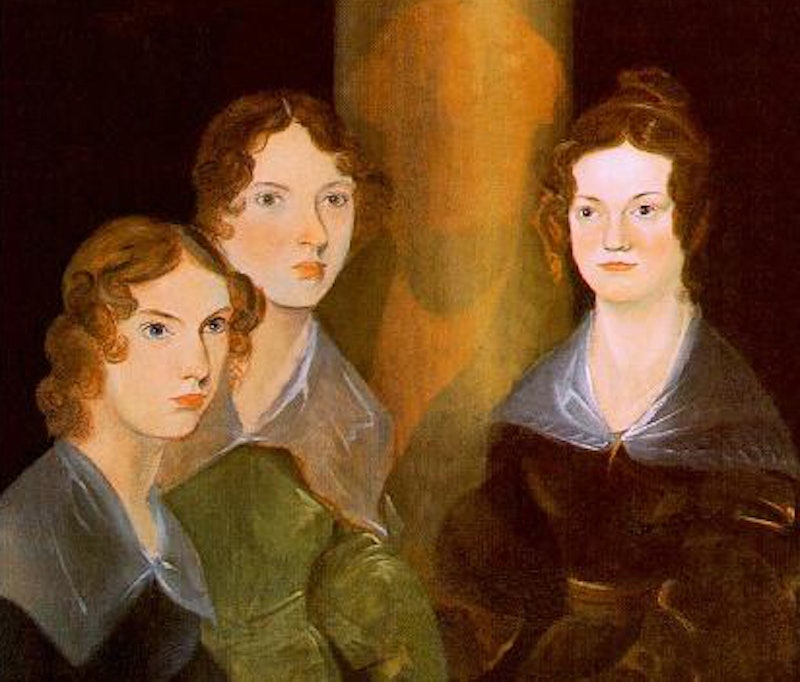 Fans of gothic literature, rejoice! The BBC is making a TV drama about the Brontë sisters, Charlotte, Emily, and Anne. AKA, the three ladies responsible for an impressive chunk of your high school and college reading lists. Plus, they were all pretty awesome — yes, even Ann, who never gets as much credit as her big sisters.

If you've spent much time in English class, you've probably picked up a few basic facts about the Brontës. For instance, the fact that they all published under male pseudonyms in order to have their work taken seriously — though they did each keep their initials, the new names being Currer, Ellis, and Acton Bell. You also probably know all about the fact that the girls began writing at an early age, and that today Charlotte's Jane Eyre and Emily's Wuthering Heights are considered to be classics of English literature. And somewhere along the way, you probably gleaned that Anne is generally considered to be the meeker, less interesting sibling — though that view has been challenged lately.

But beyond the basic facts, there's so much more to the story of this literary family, like the fact that their father grew up poor and was self-educated, or that their brother was an alcoholic and drug addict. So basically, having a TV drama that explores this family sounds fantastic.

Here are 7 fun facts about the Brontë sisters that hopefully come up in the two-hour television drama.

The Brontë sisters' first book was a collection of poems from Currer, Ellis, and Acton Bell, and it was not a success in the slightest. Only two copies were sold when it was first published, which is a poor showing by any standards. Today, though, you can still find the book on Amazon, where it seems to be more popular.

Today, Wuthering Heights is considered to be brilliant — in fact, I once had an English teacher who referred to it as "the most subversive novel ever written in English." But it might never have made it to the public at all if Emily Brontë hadn't been willing or able to pay to have it published. It's kind of mind boggling to think about.

Although Anne is usually not given much credit as her big sisters, her first novel Agnes Grey about a disillusioned governess might have been a big influence on Charlotte's most famous work, Jane Eyre. Anne herself worked as a governess as well.

Charlotte Brontë Once Fell In Love With Her (Married) Teacher

While in Belgium, Charlotte fell for her married teacher and wrote him several letters expressing her feelings, which he tore up. His wife, though, pieced them back together. Charlotte's apparently unrequited love probably helped inspire her novel Villette.

There Were Five Brontë Sisters

Poor Maria and Elizabeth. Most people say that Charlotte was the eldest Brontë sister, when really it was technically Maria Brontë, who sadly died of consumption at the age of 12. Then, there was Elizabeth, who died six weeks after Maria. If they'd grown up, would they have been literary greats just like their three younger sisters? I guess we'll never know.

Unlike his sisters, Branwell Bronte never amounted to much. After being sacked from several jobs, he spiraled into addiction to alcohol and opium, and eventually died of tuberculosis. And according to one eye-witness account, when knew his death was close, he insisted on standing up, leaning against the mantle, just to prove that he could, in fact, die standing. So I guess he does have that one accomplishment to his name.

Charlotte Brontë Is Credited For Coining the Phrase "Wild West"

The earliest known use of the phrase, according to the Oxford English Dictionary, is from Charlotte's novel Shirley in 1849. But in reality, the phrase was probably in common usage much sooner in both the U.S. and England. Still, technically, she does have the credit right now according to the OED.

While Brontë sounds like it could be a German surname, the Brontë sisters were actually of Irish descent. Their father Patrick changed his surname from Brunty to Brontë when he moved to London from Ireland as a young man, possibly to disguise his rather lowly origins. The Brunty sisters... it just doesn't have quite the same ring to it, does it?