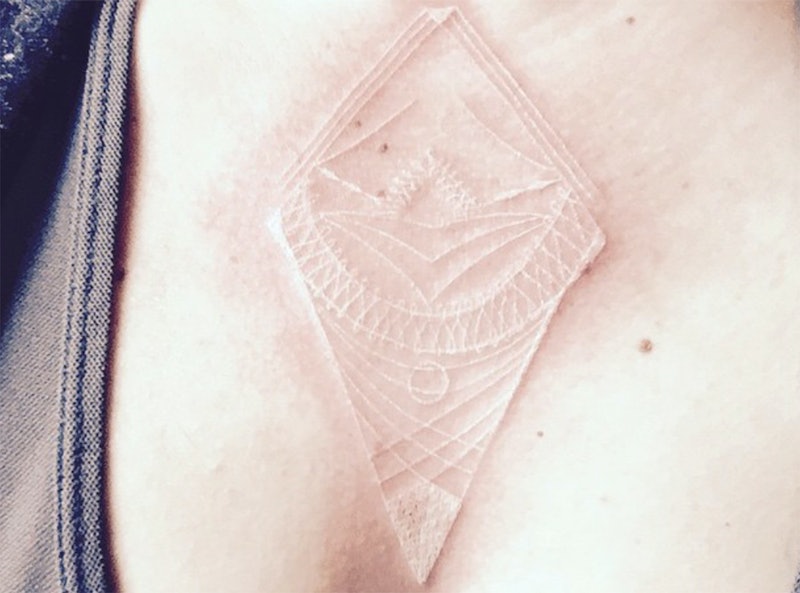 No matter the color, the UV rays of the harsh sun are absolute MURDER on tattoos. Even if you aren't specifically sunbathing, high SPFs should be on a constant rotation in your medicine cabinet to protect your ink on a summer's day. With white tattoos becoming more common this season, everyone's wondering what white tattoos on tan skin look like before they head under the needle for some hip new ink. Honestly, the answer is different for everyone, but white tattoos generally have a harder time surviving after the healing process than other colors of ink. For most people, you may spend the rest of your life running from the sun just to keep your tattoo from looking like a raised disease on your skin.

The sun has a unique way of playing with our emotions. The vitamin D helps us maintain a normal energy and peace of mind, but that whole skin cancer side effect is kind of a bummer. A day out in the sun has even lightened some stubborn scars of my own, but you definitely don't want to lighten your tattoo, especially a white tattoo that is already mostly transparent in the first place. Ultraviolet rays from the sun may seem like an easy thing to avoid, but even spending ten minutes outside (that's like, a round trip walk to the subway) can have harmful effects on our skin. Before indulging in these seemingly effervescent white ink tattoos, consider how much sun your skin can take.

According to sources at White Ink Tattoo Center, white tattoos work best on pale, unfreckled skin. Even though everyone needs to be wary of the sun's cruelty, pale skin is more likely to be affected by sun damage than other skin tones. Obviously tanning beds are going to be a major don't with white tattoos (and all tattoos, really). According to sources at Skin Artists, the concentrated ultraviolet rays can leave your skin overexposed and burn your tattoos even more quickly than some time outside. Unlike other colors, white tattoos aren't necessarily going to look as good as you treat them — even the the highest SPF may not protect the light coloring, leaving your tattoo looking completely transparent way faster than bold colors like blacks and blues.

Genetics play a role in how white tattoos look after a tan, but even those who have a high tolerance for the sun seem to be struggling with their white tattoos accidentally being exposed. A friend of mine took a long walk after her white tattoo (pictured above) had healed, and only a week later, she was left with tiny bumps and little sign of the beautiful tattoo (see below). Now, her biggest concern isn't even how to keep her tattoo longer; it's how to get rid of those crazy bumps it and the sun left behind. Fortunately, having an elegant white tattoo for a week was worth the cash for her, and she's not kicking herself over it going wrong.

I like to think of white tattoos as the inside-the-lip tattoo of colors: Get them done at your own risk, and don't be surprised if you after a few weeks, the only reminder you have of your tattoo is the one Instagram you snagged in the parlor.