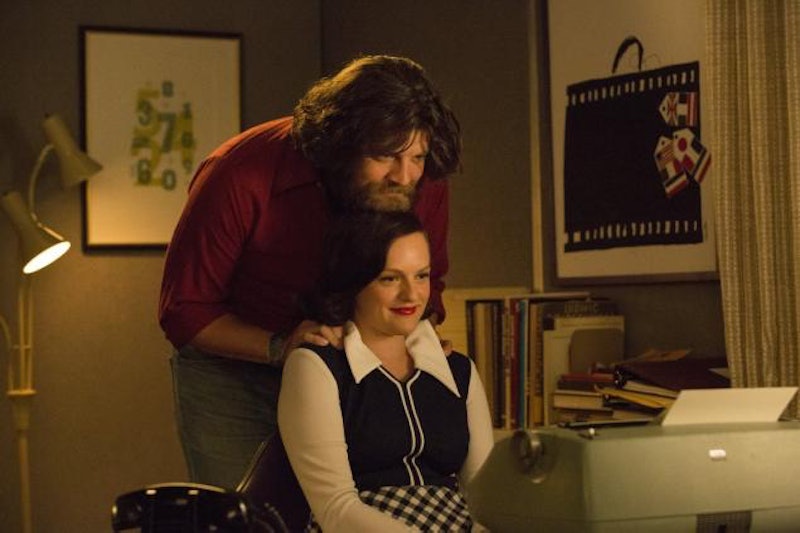 If I were asked to choose one character who defined Mad Men as a series, I would have to choose Peggy Olsen. Though she started off as a naive, sheltered secretary, Peggy became Don Draper's very unlikely protegee, and the first female copywriter at Sterling Cooper. After giving birth to a secret child that she chose to give up for adoption, Peggy redefines herself into a savvy career woman. Though she has relationships throughout the years, Peggy lives to work, and much of her life is spent within the walls of her offices. Played by the impeccable Elisabeth Moss, Peggy seems to be content to live life as a workaholic, but her personal happily ever after had been staring her in the face all along.

Peggy and SCDP's art director Stan Rizzo had come to a sort of tenuous friendship after being at each others' throats. Their phone calls became the stuff of legend, and in the final hour of the series, Stan finally confesses his love for Peggy.

Stan: "Good because I didn’t want you to leave. Because every time I’m face to face with you I want to strangle you. And then I miss you when I go away. And then I call you on the phone and I get the person I want to talk to. But when I’m standing in front of you, I bring out something terrible. Think about how you came into my life and how you drove me crazy. And now, I don’t even know what to do with myself. Because all I want to do is be with you."Peggy: "What? What did you just say?"Stan: "I want to be with you. I’m in love with you."

Though it's very unlike Mad Men to cater to its audience, it was certainly time for Peggy to find happiness in both her business and personal life. Here are seven ways Peggy and Stan will define their relationship post Mad Men.

1. Move to Brooklyn Together

Peggy and Stan were hipsters before hipsters were a thing; Stan even has the beard. Naturally, they will buy a brownstone in Brooklyn.

I'm not sure that children would be in Peggy and Stan's future. However, I can certainly see them adopting a cute pooch.

3. Stan Will Open A Coffee Shop

Though he was always good at his job, Stan never seemed to be in love with it. Coffee seems to be a bit more in line with his passion, and he seems like the perfect surly coffee shop owner.

Not much for fanfare, Stan and Peggy will probably go away for a weekend and get married without telling anyone. I'm thinking a fall wedding among the trees somewhere in upstate New York.

Don hasn't exactly been father of the year, and we can only hope that he steps up to be more involved in his children's lives. As a single parent he would inevitably have to rely on other people for help. Though they have little experience with children, Stan and Peggy might be the first couple he turns to.

6. Peggy & Stan Could Form A Company of Their Own

Though Joan offered Peggy a partnership in her newly formed production company, Peggy decides to take her chances at McCann Erickson. Should that fall apart and if Stan grows tired of the coffee business, the duo could form their very own business.

Peggy and Stan are known for their blowout arguments. But arguments often clear the air and make for better communication and relationships. They'll be happily ever after.