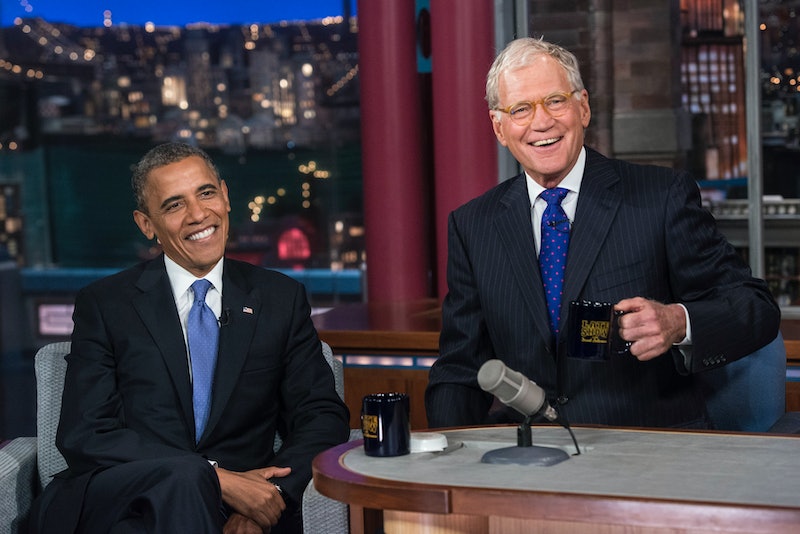 After 22 years on television, David Letterman will make his final appearance Wednesday. As the longest-tenured late-night talk show host in history, Letterman has interacted with quite a few politicians throughout the thousands of episodes he has hosted. And as the 2016 elections ramp up, there’s one thing we can probably all agree upon: the upcoming presidential elections just won’t be quite the same without Letterman.

Letterman has hosted everyone from Herman Cain to Barack Obama to Mitt Romney on The Late Show. Chris Christie poked fun at his weight on the show by devouring a powdered doughnut on Letterman’s couch, and Romney joked with Letterman about his love for Kim Kardashian’s tweets. Jokes aside, Letterman has also made some more serious points on his show, such as when he called out Sen. Jim Inhofe for his stance on gun control and when he talked to Obama about race.

Here’s to you, David Letterman. And, here’s a look back at all of those times he managed to make politicians squirm from awkwardness or laugh at themselves. We’ll certainly miss seeing you do the same with everyone from Hillary Clinton to Ted Cruz in 2016. Take a look at seven politicians’ best moments on Letterman’s show.

Barack Obama became the first sitting president to ever appear on Letterman’s show in 2009. When Letterman asked Obama about the challenges he’d faced in his first year due to his race, Obama gave this awesome, deadpan response:

It’s important to realize that I was actually black before the election. This is true. So the American people, I think, gave me this extraordinary honor. That tells you a lot, I think, about where the country is at.

New Jersey Gov. Chris Christie has long come under fire for his weight, and when he took to Letterman’s stage, the two decided to make light of it. When Letterman brought up the fact that Christie was teased about his weight, Christie pulled a powdered doughnut out of his pocket, which he quickly devoured.

During the primary season for the 2012 presidential campaign, Texas Gov. Rick Perry used the Letterman stage to explain one of his gaffes. In a debate, Perry had stumbled big time in the middle of a speech when he forgot the name of the government program that he wanted to get rid of. His excuses: “I just learned Justin Bieber is my father,” and “You try concentrating with Mitt Romney smiling at you. That is one handsome dude.”

Shortly before Mitt Romney announced he was running for president, he stopped by Letterman’s late-night show to promote his book, No Apologies. Romney cracked some jokes while he told the audience 10 things they might not know about him, including: “Oprah is my half-sister,” and “I can’t begin my day until I’ve read The Washington Post and Kim Kardashian’s tweets.”

George W. Bush was one of Letterman’s biggest targets for impersonations and jokes. However, Bush offered some humor himself on some of his appearances, including his effort explaining why he called a New York Times reporter an “asshole,” and describing his plans to put together an executive order to have Jeb wash his car.

In 2007, Hillary Clinton rattled off her “Top Ten” list of campaign promises. Some of her promises are pretty darn great. They include: “Turn Gitmo into a Dairy Queen as soon as possible,” and “Bring stability and long term security to The View.”

When John McCain appeared on Letterman’s show in 2008, he managed to turn the tables. McCain apparently did not like Letterman’s jokes about his age, because he offered up this spiel of joking retorts about the host himself: