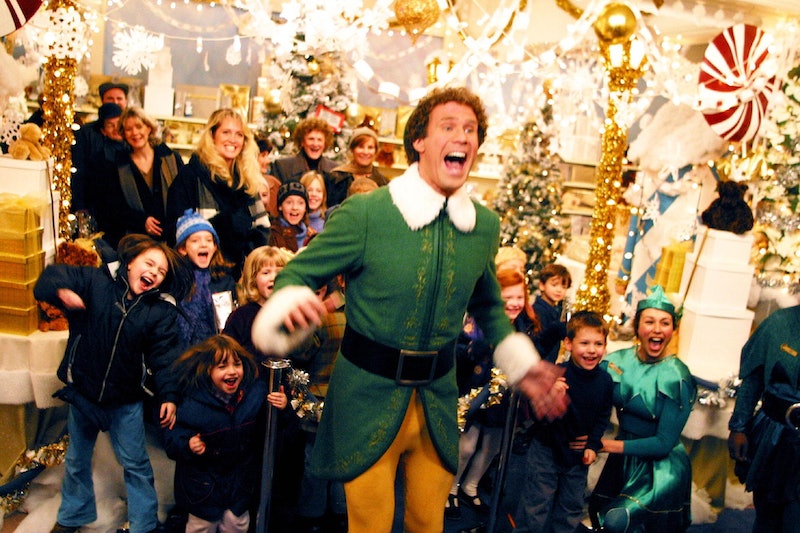 Today marks the 10 year anniversary of Elf , the quirky and charming story of one elf trying to find his human family in the big city. A staple of pre-Christmas viewing parties, Elf instantly became a holiday classic when it hit theatres in 2003. Starring Will Ferrell, then blonde (!!!) Zooey Deschanel and Game of Thrones' Peter Dinklage, the flick has become synonymous with the name "Francisco," taught us the four major elf food groups (candy, candy canes, candy corns and syrup), and gave us the insatiable urge to have a snowball fight in Central Park. But there might be a few things about the film you didn't know, like who almost played Buddy the elf instead of Will Ferrell, and what those cotton balls Buddy consumes in the doctor's office are actually made of. To celebrate one of our favorite festive flicks, here's 13 little known Elf facts.

1. Could you imagine anyone else taking on the title role in Elf? We couldn't either. But before Will Ferrell signed on, Kick-Ass 2's Jim Carrey was originally tied to the film.

2. On the final day of shooting, it was just Ferrell, the director, and one cameraman running around New York City looking for places to shoot. When they found a good spot, they'd ask random pedestrians if they'd be willing to let Ferrell parade around them acting like Buddy. This is how they shot the scenes where Buddy jumps through traffic and gets his shoes shined.

3. Director Jon Favreau cameoed in the film as both the doctor and the voice of the claymation narwhal.

4. The sound effect used for the jack-in-the-box that frightens Buddy is the same sound used to produce the laughing hyenas at the Magic Kingdom in Disney World.

5. When Santa shows Michael the "Nice" list, all the names that appear are people who worked on the film, from the makeup artist to the light technician.

6. Those cotton balls Buddy consumes in delight in the doctor's office? Cotton candy that hadn't yet been dyed.

7. Will Ferrell actually consumed all the candy from the elf food pyramid while filming, but because of this, he suffered constant headaches.

8. Plans for Elf 2 were canceled when Will Ferrell shot down the idea of reprising his role as Buddy. WHY WILL, WHY?!

9. Elf is the first film SNL vet Will Ferrell starred in after leaving the show.

10. The scene in the department store when the fake Santa chases Buddy around the store, knocking over all his hard work, had to be done in one take — it would have been too difficult to rebuild everything.

11. Will Ferrell actually caused several minor traffic accidents when he was running through the Lincoln Tunnel dressed as an elf because drivers were so surprised to see him dressed up in the festive costume.

12. Perhaps one of the most memorable scenes, Buddy's 12-second long burp, was provided by voice actor Maurice LaMarche, best known for voicing "The Brain" on Pinky and the Brain.

13. The outside of Gimbels is a digitally altered view of the 34th St. Macy's (Gimbels no longer exists, but was Macy's main competitor back in the day). The change was a nod to another holiday classic, Miracle on 34th Street.

All facts via IMDB

More like this
The 'Jurassic Park' Cast, Then & Now
By Arya Roshanian
The 'Hocus Pocus' Sequel Finally Has A Release Date & It Makes Total Sense
By Shannon Barbour and Radhika Menon
Everything To Know About 'My Big Fat Greek Wedding 3'
By Grace Wehniainen
Alicia Silverstone Has Recreated An Iconic 'Clueless' Scene
By Frances Stewart
Get Even More From Bustle — Sign Up For The Newsletter