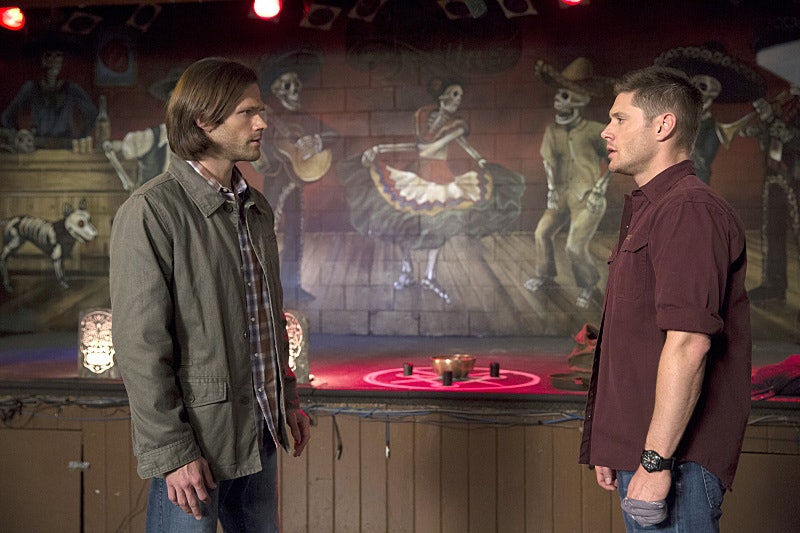 Oh those Winchester boys, they really know how to put us through the ringer. The Supernatural Season 10 finale is finally upon us and even though we've all watched literally hundreds of episodes, I'm not ready for the hiatus. There are still too many unanswered questions! Will Dean get rid of the mark of Cain? Will Sam go dark trying to save him? Can we finally see them just hug it out like old times? Hopefully, this week's episode will answer these questions, but I'm bracing myself for some cliffhangers that will haunt us during the summer. It's just the nature of the beast. At least we know with certainty that we'll get more of them in a few short months with the premiere of Supernatural Season 11 scheduled for this fall. [UPDATE: The CW has announced that Supernatural will premiere on Oct. 7.]

While a specific return date hasn't been announced yet, the past three seasons have all premiered in the beginning of October, so it's likely that Season 11 will follow suit. The earliest Supernatural has ever premiered is mid-September, so don't expect to see Sam and Dean before then. If that feels like forever and you just can't make it, I've got you covered with a Winchester marathon to catch up on all of the amazing projects these guys have been involved with — aside from kicking demon booty. There are a lot of amazing options out there so I have whittled it down to the best, most swoon-worthy performances for your viewing pleasure. So sit back, relax, and enjoy the top 10 Jensen Ackles and Jared Padalecki projects while you wait out summer.

I am a huge fan of Gilmore Girls and of of the many amazing aspects of the show is Padalecki as Dean, Rory's first love. He's young, he adorable, and he wears a lot of sweaters — it's the best.

The WB was very kind to these two, as Jensen Ackles cut his teeth in the supernatural here first, spending Season 4 as Jason Teague. Watching the full series may take you just as long to get through as Supernatural, but it's worth it to get to his part.

When he wasn't being a dreamboat on Smallville, Ackles caught the tail end of Dawson's Creek fever playing C.J. If you liked Gilmore Girls, this might be your best bet for a follow-up show.

The Olsen twins running amok in New York, Padalecki as the young heartthrob... you really cannot go wrong with this one.

I hope you like horror movies, both of these guys have been in their fair share. Ackles stars in this one as a man returned to his hometown only to be accused of a string of murders. Good (bloody, gory) fun.

If you want to watch Friday the 13th, you have a lot of different options to chose from. However, this is the only version with Padalecki in it, so that should make the decision pretty easy.

OK, last horror movie I promise. But this one is like a beautiful time capsule! Filled with halter tops, ginormous cellphones, and Paris Hilton — plus Padalecki — it is the mid 2000s at their best.

It's a cute flick, made even cuter because Ackles stars alongside his now-wife Danneel. So they took the tagline: "Stop by, grab a sandwich, fall in love," pretty literally.

Flight Of The Phoenix

Dennis Quaid, Tyrese Gibson, Giovanni Ribisi, and Padalecki in one movie? You bet. Watch them band together to try and escape the Mongolian desert.

But why settle for one brother when you could have both? Currently there are nine seasons available to stream on Netflix. Start from the very beginning and soak it all in.

More like this
“The Door Is Always Open” For Another 'Breaking Bad' Spin-Off, Says AMC Boss
By El Hunt
Here's Why You'll See Less Of Olivia Rodrigo In 'HSMTMTS' Season 3
By Bustle Editors
'Succession' Season 4 Could Be The Show’s Last
By Kadin Burnett and Gabrielle Bondi
Everything To Know About The Flash Season 9
By Brad Witter
Get Even More From Bustle — Sign Up For The Newsletter