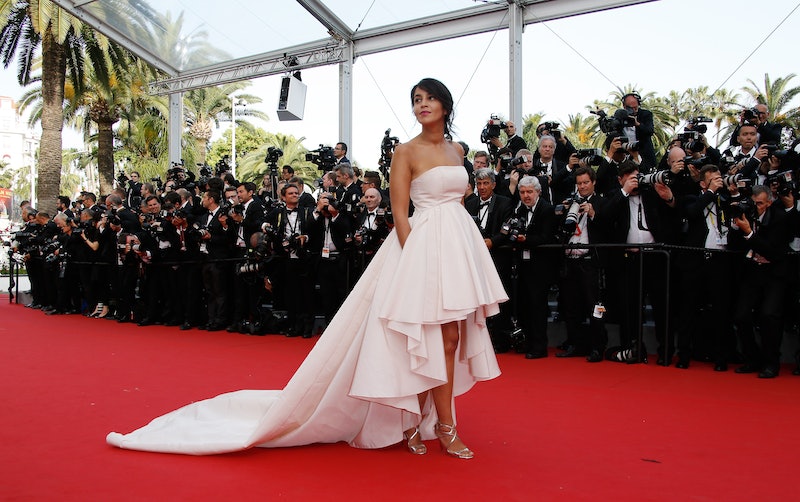 Heels can kill your feet. Apparently, the Cannes Film Festival cares not about that fact, as women have been turned away from Cannes for wearing flats. Why? Because it breaks with the established, publicly posted, but not exactly super specific dress code.

I like wearing heels. They make me feel sexy and, well, tall, because I have no height and hover at 5'2". But wearing them for an extended period of time makes me want to set them on fire. However, if I were to hit Cannes this week, I guess I'd have to suck it up.

According to multiple reports, women who were wearing fancy, pretty — and likely pricy — flats, not flip flops or casual sandals, as opposed to heels, were given the boot, no pun intended. Their footwear was considered inappropriate.

Cannes is all about endless glamour and the festival has a dress code for red carpet screenings, which is understandable. It's a chic event. The black tie dress code is in effect and is apparently immutable. It’s posted on the website and it’s enforced by security.

It reads as follows: "Black tie /evening dress is required for gala screenings," and while it does not expressly say heels, one must assume that it means heels. But if it's left somewhat open to interpretation, how can ladies be penalized for... interpreting it?

It sounds like exceptions cannot be made, either. The Screen Daily report shared details of the women wearing flats who were turned away, noting many middle-aged women, with medical conditions and who should not wear heels for their health and safety, were denied access.

Do these women who can’t (and shouldn't) wear heels need to resort to kitten heels? A tiny espadrille wedge?

Buzzfeed notes that one of their French reporters actually wore flats during the opening ceremony and went unnoticed, but perhaps she may have been wily enough to sneak past the eagle-eyed dress code enforcers?

Buzzfeed also spoke with a woman, 21, who suffers from ankle and back issues. She claimed she was denied entry despite wearing a dress with beautiful flats. "I was told that because I didn’t wear heels I couldn’t walk up the red carpet," she stated. She even inquired whether it was the color or the height of her shoe which constituted an offense and a security guard said "Both."

When she explained her condition, he asked her to produce an "invalid card." Ouch!

Bustle received the following statement from Cannes in an email:

Ah, so there it is. There is no set heel height, but wearing heels is obligatory, yet unspoken and expected to be followed.

Of course, there were social media reactions and proof that this policy was being enforced.

This opens up a lot of further discussions about gender roles and constructs, since forcing women to wear heels due to an old-fashioned rule doesn't feel very liberating, even if you are a woman who wants to wear them.

The rulebook should at least be amended to consider the fact that heels really aren't for everyone, beyond matters of taste.