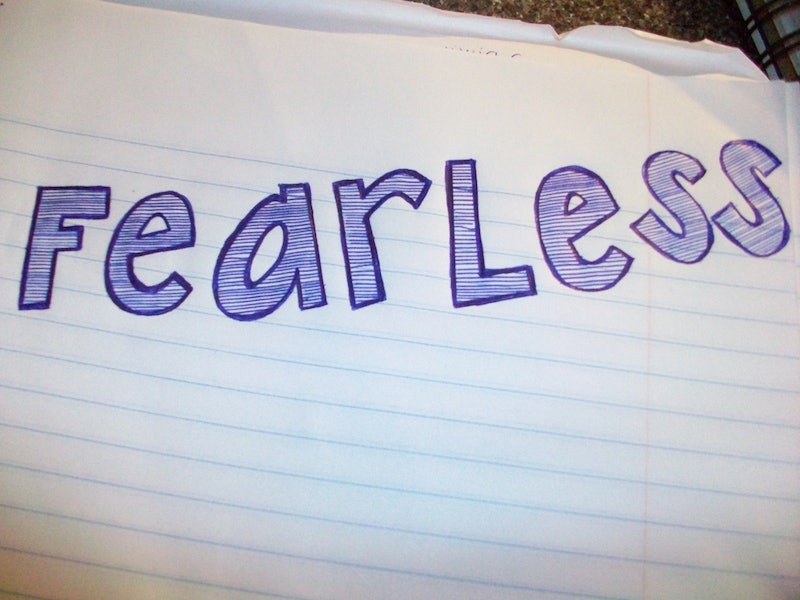 They say that facing your fears is good for you — though I've also found that studiously avoiding things that scare you seems also to be a solid strategy. Taking another approach, though, is Michelle Poler, who gave herself a "100 Days Without Fear" challenge: Every day, for 100 days, Poler is going to do one thing that Poler made it a goal to do one thing that scares her, every day, for 100 days. Clearly this girl is braver than I — and no, I am not ashamed to admit that.

Poler is originally from Venezuela, but now lives in New York, where she is pursuing a Masters degree in Branding from the School of Visual Arts. The school recently encouraged students to create a "100 day" project for themselves, and Poler chose to use it as an opportunity to overcome her fears. As she explains on the website she created for the project, the she was partly motivated by the challenges that accompanied her move to New York, and the loss of the more controlled lifestyle she led before living in the city.

"Trying to control New York has been a nightmare," she writes, "but what really pushed me to pursue this project was not the controlled lifestyle I left behind, it is the frustration of not enjoying this city and life in general to the fullest."

Well, clearly this girl is made of some strong stuff, because while living life to the fullest might sound like a great idea, deep down I think most of us know that living life to the most comfortable actually sounds more appealing.

In fact, as Poler herself points out, just taking on this project is scary.

Poler has currently completed 40 days of the project, and so far her challenges have ranged from the daunting (like public speaking) to the mundane (like trying Indian food for the first time) and from the noble (like donating blood) to the fun (like riding a mechanical bull). Most of the exercises aren't actively dangerous; she isn't jumping out of airplanes every day or taking up other extreme sports. Rather, she's taking on the ordinary things that intimidate her, and doing them even though they make her feel freaked out or anxious — all of which is pretty awesome.

She's also continued to share her progress on a website she created, 100 Days Without Fear, where she writes about the challenges, posts videos, and even includes a handy "Emoji–Meter" to depict the emotional experience each challenge involved.

She also came up with a list of reasons why she's doing the project — or, as she says, to remind herself "why the f--- I am doing this." And they might just work well for someone who isn't doing a fear challenge, too:

And so far? They seem to be working. Poler has done 40 challenges and shows no signs of letting up. Here are just a few of the things she's done:

2. Leave Her Phone At Home

3. Overcome Her Fear of Dogs

You can check out a list of other challenges she's done here. Do you have the guts to do something similar?