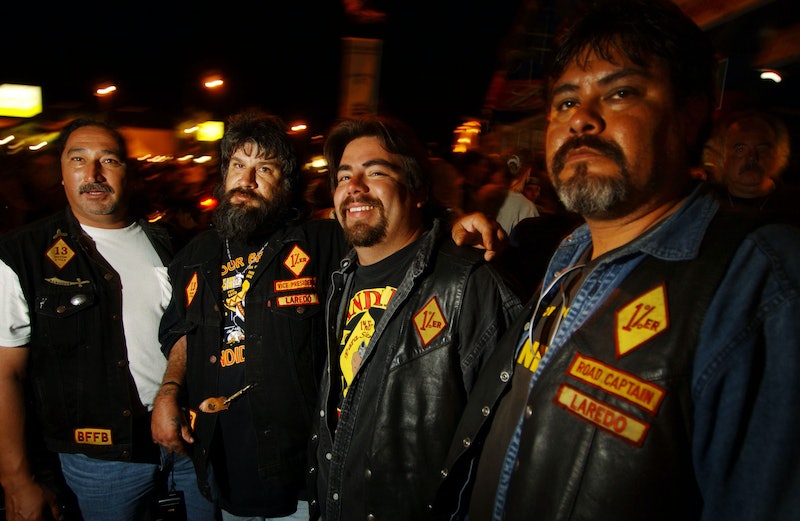 Biker babes — they're the leather-wearing, highly fetishized, heavily stereotyped companions of rough-and-tumble motorcyclists. But with the horrific killings in Waco, Texas this Sunday, it's worth looking at their role, and if women can be members of motorcycle groups like the Cossacks and Bandidos.

The short answer appears to be no, although the Cossacks and Bandidos could not be reached for comment. The Guardian reported that women are barred from being a card-carrying member of the Bandidos. According to a paper used as a primer for emergency room personnel published in the Western Journal of Emergency Medicine, women are not typically allowed in any kind of outlaw motorcycle gang, a category that the Cossacks fall into neatly.

Outlaw motorcycle gangs are rampant with misogyny (go figure). The journal's research says that though women cannot join, many affiliate themselves with the club in other ways. As unofficial members, the paper claims, they are still involved in illegal activities. According to the research, many of the women end up as prostitutes or street-level drug traffickers. Some of the women allegedly wear "property patches" or belts to show their affiliation.

The Bandidos, one of the infamous biker gangs involved in Sunday's shootout at Twin Peaks, apparently have a specific distinction for girlfriends or wives: Proud Bandido Old Lady, according to a 2007 Texas Monthly profile. There isn't much known about the PBOLs. By some accounts, given to Texas Monthly, they are allegedly attractive, ride with the gang, and wear the PBOL label (literally, on patches or necklaces) with pride. Texas Monthly's profile also revealed that some male members allegedly have multiple "old ladies" that they split their time between.

But in one account, not all of the Bandido ladies landed there by choice. Journalist Judd McIlvain, who reported on the Bandidos for 20/20 and a Houston CBS affiliate, posted a letter on his website allegedly written by a former PBOL. If true, the insider story is horrifying. According to the letter, the woman — who said she wished to remain anonymous —was plucked from her job as a stripper, and stalked and beaten until she agreed to become the Old Lady of a member. She wrote:

When we got to east beach there were 12 Bandito’s [sic] waiting for us. I thought the nightmare had begun back at the club when he picked me up. Not so.. He took out a pistol and put it to my head and began calling me names and threatening me about how he was going to take my life away. He wore big diamond rings on both of his hands and he would backhand me with one fist, knock me to my knees and then order me to stand up and then backhand me with the other fist. I, being in a state of shock, could not muster up one tear in my eyes and I think that pissed him off even more.

So can women be a part of the Bandidos? Likely, no — at least not as official members. And, honestly, it doesn't sound like they'd want to be.

More like this
Kim Kardashian & Pete Davidson’s Relationship Timeline From Start To Finish
By Jordyn Tilchen and Bustle Editors
Khloé Kardashian Is Reportedly Dating A Private Equity Investor She Met Through Kim
By Jordyn Tilchen
Kendall Jenner & Devin Booker Have Seemingly Reconciled Just Weeks After Split
By Jordyn Tilchen
25 Things I've Reduced My Life To, In Addition To WFH In My PJs
By Ginny Hogan
Get Even More From Bustle — Sign Up For The Newsletter