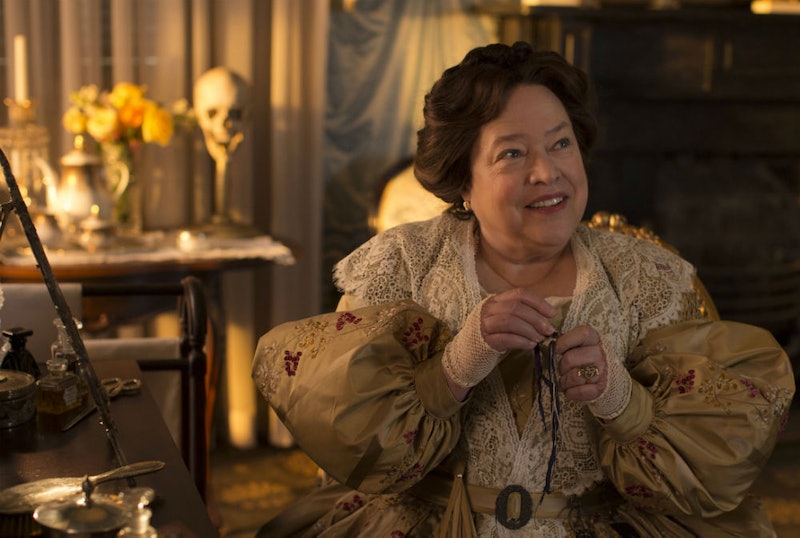 FX’s American Horror Story is beloved for making us feel an entire spectrum of emotions that spring from terror to confusion. That’s the series’ bread and butter – or guts and glory, if you will. American Horror Story: Coven , however, has us feeling something very uncomfortable: affection for a notoriously brutal and vile New Orleans murderess. Kathy Bates does an incredible job as Madame LaLaurie, the woman whose house of horrors still stands in New Orleans as a reminder of all the horrible atrocities she committed against her slaves, yet on AHS, she’s suddenly become a sympathetic and, dare I say it, lovable maid with a lot to learn.

There’s a bit of cognitive dissonance that comes with every LaLaurie moment on AHS. For example, the first time she and Queenie (Gabourey Sidibe) spend time together after Fiona (Jessica Lange) deems LaLaurie Queenie’s slave, the newly demoted Madame calls Queenie a “negress” and tells Queenie that if she doesn’t stop eating she’ll never find love. Even though her words are sour, her tone is sweet. Chalk it up to Bates’ ability to add subtlety, but it seems that Madame LaLaurie doesn’t entirely hate Queenie and that perhaps, after 100 or so years in a grave, she’s finally starting to change a little.

Cut to this week, where she’s faced with yet another assassin sent by Marie Leveau. Two weeks ago, it was a Minotaur, this week it’s a flock of zombies, a few of which are the former daughters LaLaurie once locked up for a year in her attic after they joked about murdering her when her disgusting Halloween trick drove another eligible bachelor away. It’s a fitting end for a woman who put the ring leader of the daughters in a cage fit for a small dog, broke her leg, and then threatened to feed her “shit” on Christmas morning.

Only, after watching a flashback with her daughters in cages in which LaLaurie commands her henchman to “just break her leg,” LaLaurie somehow survives this attack and even rescues Queenie from one of her daughter-zombies by stabbing it in the chest. The two women sit on Queenie’s bed and LaLaurie cries on Queenie’s shoulder saying that her daughters had a monster for a mother. We’re supposed to gather that she regrets all of her past behavior.

So what’s the big deal? Everyone loves a redemption story, and in some sense, what’s happening to Madame LaLaurie is what we hope happens to everyone who’s ever chosen the dark side. Now, it appears that LaLaurie is actually learning and growing and changing, suggesting that her ability to do the unspeakable things she did to her slaves can be nurtured out of her, and fast. Overnight, she’s become a sympathetic character we’re almost rooting for. In fact, when she and Queenie embrace after LaLaurie kills the zombie, it’s hard not to feel some sort of comfort that they have each other. Yes, comfort that Queenie and the infamous torturer of slaves (and apparently daughters) have each other.

On one hand, this is an incredible feat on the part of American Horror Story and the actors involved. They’ve done the unthinkable; they’ve made our hearts leap over our brains. But it’s not right. No matter how good of an actress Bates is, it still feels wrong to side with a woman (even one who’s making changes as best she can) whose claim to fame was sewing slaves’ mouths shut, keeping them in cages, drinking their blood to stay young, and (in the AHS version of history) putting that bull’s head on the slave who slept with her daughter. It feels wrong because LaLaurie is not some figment of Ryan Murphy’s imagination. She was a very real, very despicable woman. And most of America is learning that she's a disfigured soul with the ability to rehabilitate, and not the vicious monster she really was.

True, we have reached the point in our culture where we joke irreverently about the evil that exists in the world. It’s a sort of masking technique: if we mock evil, it can’t be as bad as we think it is. That explains the rash of Jeffrey Dahmer jokes immediately following his arrest and trial back in the ‘90s. But beyond that, people like Adolph Hilter, who’s known worldwide for the atrocities he committed across Europe, have since been resurrected in various comedic forms including “Lil’ Hitler” in a recurring Robot Chicken sketch (below), a singing and dancing Hitler on South Park, and even Hipster Hitler in a popular web comic.

Across the board, his legacy is being used for easy-going comedy. This hasn’t riled the masses or made anyone tilt their head like an inquisitive pug. Instead, we shrug. Either you find that sort of thing funny or you don’t. And we move on.

So why is it so easy to shrug off uses of Hitler that are made for comedy, and ones that even turn him into a little tyke on the playground, but when Madame LaLaurie is made to be a sympathetic character it feels wrong? Certainly, the “too soon” rule doesn’t apply here. However, the legacy rule does. Hilter’s horrible acts are taught in every school across the country. There’s not a person alive in the U.S. above the age of 10 who hasn’t learned about Hitler. When a joke is made about him, our brains automatically know that we’re using the legacy of a mad man like a piñata for our own amusement.

With someone like Madame LaLaurie — whose scope was much smaller, but whose atrocities were so vulgar and so steeped in hate, that sympathy of any kind seems impossible — turning her into comic relief and something of a likable character feels wrong. It doesn’t connect in our minds. We laugh, because a moment is funny or charming, and immediately afterwards comes waves of regret and shame, bubbling up like bad indigestion.

We can’t laugh with her. We can’t find her oddly cute in her ignorant-but-getting-better sort of way. This woman ripped out intestines from a living body as he cried out for mercy. She burned and tortured her slaves because she thought slaves were lesser beings than animals. She was an irreparably horrible person, and accepting that she could regret and change is beyond our comprehension. Yet, there it is before our eyes as she hugs Queenie and cries.

We can’t help but feel something. But perhaps it has something to do with the fact that we’ve already suspended our disbelief so greatly for a show like AHS. We’re willing to allow the notion that witches exist, that they can regenerate life and flip buses with the wave of a hand, that they still burn criminal witches at the stake, that voodoo can raise the dead and turn zombies loose, and that Jessica Lange can live forever.

We’ve accepted the notion that Marie Leveau and her own torture subject Madame LaLaurie are immortal, so perhaps accepting the notion that someone as despicably twisted as LaLaurie can change when given the chance to lay alive in a grave for over 100 years thinking about her sins and being humbled by a wicked witch thereafter. Perhaps, this idea that LaLaurie can become a better person worthy of our chuckles and sympathy is the same as the idea that Fiona touches a stillborn baby in the hospital and brought it back to life. It’s an impossible miracle, and it’s one we sorely want to be true. The notion that we could rehabilitate someone so dastardly feels about as possible as happening upon a unicorn in Central Park.

So rather than letting our brains twist up into angst-ridden knots every time Madame LaLaurie does something right, perhaps we should continue to suspend our disbelief and simply count it the same way we do every other act of magic and witchcraft we see on this series. Some witches can light curtains on fire with their minds, others can convince notorious murders to be good people again. All in a day’s work on American Horror Story.

More like this
The ‘Squid Game’ Season 2 Renewal Teases A Creepy New Figure & A Return
By Brian Anthony Hernandez and Bustle Editors
Emma Thompson, Lashana Lynch, & Stephen Graham Lead Netflix’s 'Matilda'
By Sophie McEvoy
Why You Loved 'One Tree Hill' So Much — And Still Do
By Sabienna Bowman and Radhika Menon
Neil Patrick Harris Will Play 'Doctor Who's “Greatest Enemy” Yet
By El Hunt
Get Even More From Bustle — Sign Up For The Newsletter