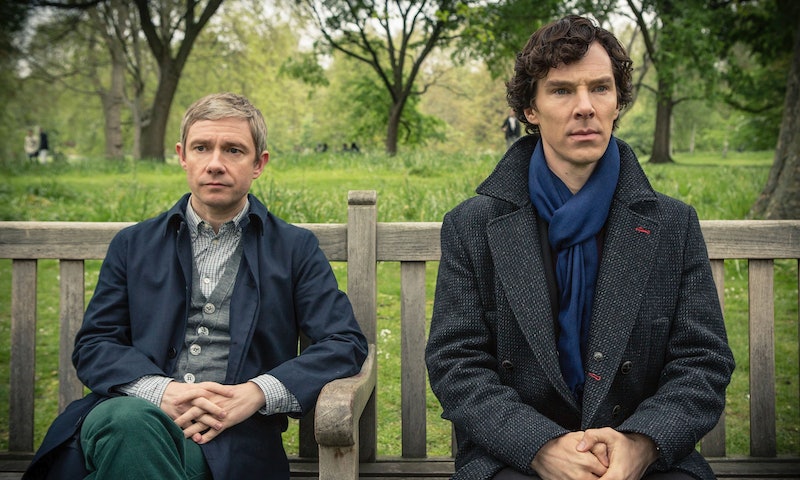 If you're like me and are a total anglophile, you've probably been drooling over the BBC's hit series Sherlock the past several years. As the show is on an extended hiatus at the moment, there's at least one thing you can do to get your fix: learn how to dress like Sherlock — or any of the show's other fantastic characters.

Unfortunately, it looks like we'll be waiting another couple of years before we get to see our favorite characters don their signature looks on the screen again, as filming for season four has been delayed until spring 2016, which likely delays the premiere until January 2017.

Until then, you can tune into your inner Sherlockian character in all their style and glory. First, you'll have to decide exactly which character you want to emulate, as the styles obviously vary from one to another, especially in the differences between the female and male protagonists. But who's to say you can't feminize your own version of Mr. Watson? Or rock his look just as is?

There are certain stylistic qualities the characters as a whole all embody, as you've probably realized while watching each of the three fascinating seasons. The tone of the series is incredibly assisted by the wardrobe choices of Sherlock, Watson, Mrs. Hudson, and Mary, among other characters.

You can easily take the following cues and pieces and find yourself in the modern yet still enchanting world of Sherlock's London. Who knows? You might even find yourself unlocking some grave mysteries around you.

“You, being all mysterious with your cheekbones and turning your coat collar up so you look cool.” — John Watson

There's nothing more ominous than a trench coat, really.

Obviously, the warm outerwear is for the likes of London weather, which can't be duplicated everywhere, but even a light jacket in a dark color matches the outer apparel of the Sherlock characters. The most important thing is to make sure you pop your collar, walk with your hands in your coat pockets, and bury your chin in that comfortable scarf — you can't be too easily detected in the middle of a crime scene!

“We solve crimes. I blog about it, he forgets his pants. I wouldn’t hold out too much hope.” — John Watson

Keep it simple and stylish with knit tops like John and Mary in the Sherlock series. Solid colors, stripes, or vintage patterns work well with the types of clothes you see on those beloved characters.

“We are in Buckingham Palace, the very heart of the British nation. Sherlock Holmes, put your trousers on!” — Mycroft

Switch it up between the suit of Holmes, the denim jeans of Watson, and the pencil skirts Mary wears to get an overall varied look from the show. The key is to wear your bottoms in a deliberately smart/put together manner. None of the characters don loungewear on the show (except, of course, for the silk dressing gowns Sherlock wears when he's thinking too much about a case and can't sleep), so keep your look classy and quite tidy, and you'll hit the bull's eye.

There's always the one-off or minor characters you might like to try, too, like Irene Adler. Dress in sexy high heels and skirts and dab on some bright red lipstick with your hair pulled up in a fancy up 'do and you've got it. Or pay no attention to your hair or makeup, dress as normcore as you can imagine, and you've got the sweet pathologist Molly Hooper down pat. Add a vintage floral dress, and Mrs. Hudson in the bag.

But before any Sherlock fan can truly get into the role of their favorite character, enjoy this iconic clip from the show: