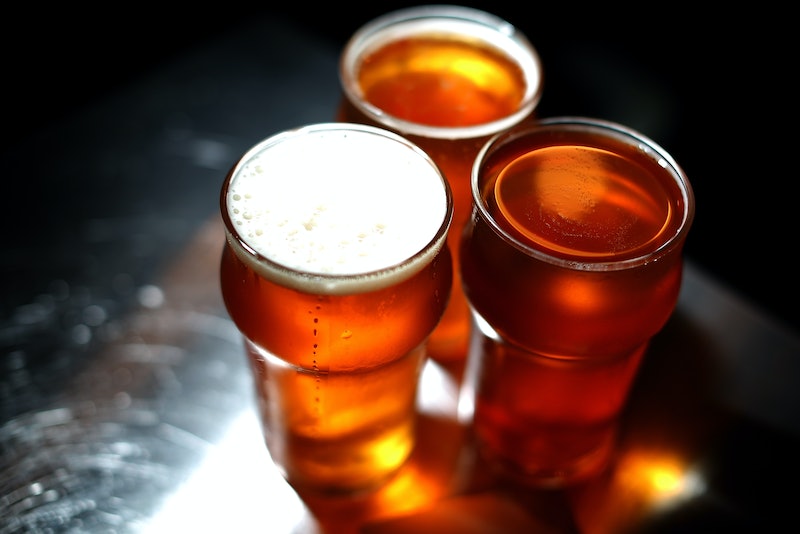 A popular new trend may be arriving in the Golden State real soon, so prepare yourself. After the passage of a bill through the state senate, beer bikes could be coming to California, a bold new way to navigate the streets while tipsy with some friends. You're forgiven if you haven't heard of these before, or even ever seen one, but you ought to familiarize yourself in case they come to a city or town near you — so what are beer bikes, exactly?

Here's the basic idea: Let's say you're doing a little bar hopping, but your feet are feeling worn out. Or maybe you're the kind of person who doesn't like to feel too idle for too long — it's nice to get those legs pumping sometimes, right? Well, the beer bike may be the solution to your all your woes.

It is possible you've heard of this concept before, under a less alcohol-specific name — bike buses, party bikes, something like that. Basically, they're shaped a bit like cable cars, tiny open-air buses that are powered by their riders' pedaling. You sit facing inward on either side, while one person at the front is tasked with actually controlling the vehicle. If you're having trouble picturing it, maybe some video will help.

The above footage was filmed in Amsterdam, to be clear. And it's important to note that, even if the California bill is ultimately signed into law, there's no guarantee that people will be allowed to drink while riding, so it might end up being more of a means to get from one bar or brewery to the next. Democratic Sacramento state Sen. Richard Pan's bill leaves it to local governments to decide whether on-board alcohol is legit. Pan described his intentions to ABC News 10.

The purpose of this bill is actually to set standards to ensure people are safe, There would be someone who's actually driving the bike who's paying attention to the road. There's someone involved who's serving, who, of course, monitors the passengers on there.

It's no shock that a whole lot of people would like to see a bartender slinging drinks on these things. Provided that they're operated safety (the person actually controlling the beer bike must remain sober, obviously), it doesn't sound like a terrible idea.

The bill is now headed to the California assembly, and if it survives there, it'll be sent to Governor Jerry Brown's desk for a signature. It's unclear whether or not Brown would sign the bill, as he hasn't given any public statement on it one way or the other. But considering that it was proposed by a Democrat, and would have to pass two heavily Democratic legislative bodies to even get that far, it seems like a safe bet.

More like this
Winter 'Love Island' May Be Starting Sooner Than Expected
By Maxine Harrison and Sophie McEvoy
A Former 'Strictly' Star Is Set To Make A Sensational Return To The Show
By Bustle UK
The Correct Way To Start An Advent Calendar, Explained
By Kaitlyn Wylde and Jay Polish
Dyson Is Dropping Futuristic, Air-Purifying Headphones
By Rachel Lapidos
Get Even More From Bustle — Sign Up For The Newsletter