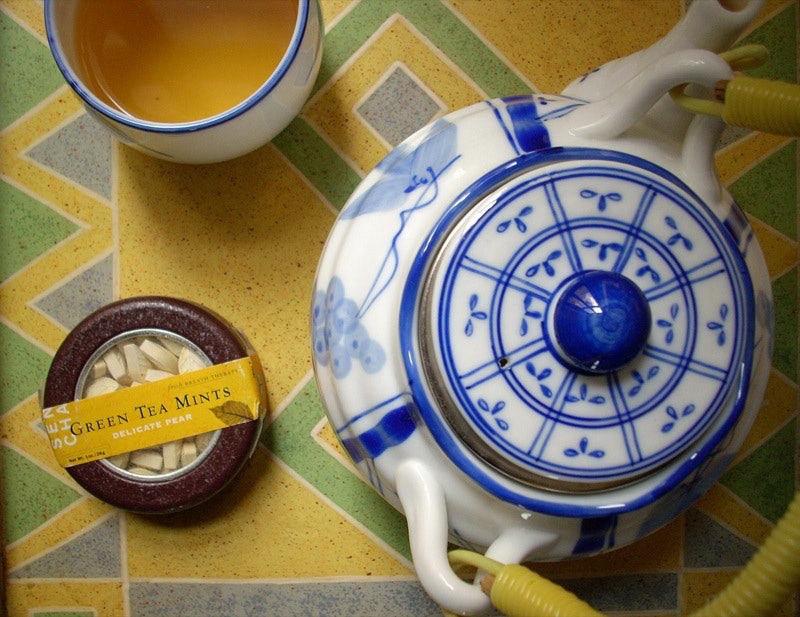 True story: One of the random topics of conversation that came up at Bustle HQ recently was whether or not you can drink too much green tea. Luckily, it's actually our job to seek out the answers to these sorts of pressing questions, so I did a little digging to see what I could find out. It's worth noting that I'm not a medical professional and therefore should not be considered an expert on the matter; so, don't take what I found to be gospel truth. It below might be a good place to start, though — from here, you can dig deeper if you want. And hey, at least green tea is tasty, right?

Can You Drink Too Much Green Tea?

In a word: Yes, but only if you really overdo it. Drinking green tea has a ton of benefits — studies have shown that it might help protect against certain types of cancer, reduce stroke risk, keep your heart in shape, promote weight loss, and more — but, as is the case with pretty much everything on the planet, you can have too much of a good thing. Drinking too much green tea can have some unpleasant side effects, so it's best to drink it in moderation. The same thing goes for coffee, wine, and even water (today I learned that overhydration is a thing. Who knew?).

What Happens If You Do Drink Too Much Of It?

A couple of things. Let's go down the list, shall we?

The biggest concern, of course, is the caffeine. Admittedly green tea has much less caffeine than coffee does — between 24 and 45 milligrams per eight-ounce cup, as opposed to 95 to 200 milligrams for an eight-ounce cup of coffee — but if consumed too freely, caffeine can still disrupt your sleep, make you anxious or jittery, and so on..

Also, it is possible to overdose on caffeine. Granted, you'd have to drink a LOT of caffeine to overdose on it; according to Caffeine Informer's Death by Caffeine calculator, someone of my size — five feet tall and 105 pounds — would need to drink a mind-numbing 286.6 cups of green tea to suffer from a lethal overdose. But even if you know you probably don't have to worry about ever drinking enough in one go to lethally overdose, it's still a good reminder of what caffeine actually is: A drug. I love my caffeinated drinks as much as the next girl, but overdoing it on the addictive stimulants is never a good idea. Not being able to sleep at night is bad enough, am I right?

This was news to me, but apparently green tea can prevent your body from absorbing iron. If you're not iron deficient, it probably won't be a problem for you — and, as a 2000 study found, you can mitigate the effects if you limit your green tea drinking to at least an hour before or after eating. It might be worth considering if you drink green tea at every meal, though.

The tannins in green tea can cause nausea in some people, and if you're one of those people? Let's just say that too much of it is not going to end well.

So: How Much Is Too Much?

The jury is still out on exactly how much green will allow you to reap the most benefits, and how much is too much. A 2008 study that found that four to five cups of green tea per day might help guard against stomach cancer; however, Dr. Zuo Feng Zhang, who conducted the research, recommended in spite of his findings drinking onlytwo to three cups. Another study from that same year found that green tea helped mice ward off weight gain when drunk in amounts equivalent to seven cups a day for humans (although bear in mind that we're talking about mice here, so there's only so far we can stretch the conclusions). Still another study found that drinking 10 cups a day can help lower cholesterol. Oh, and Caffeine Informer's Death by Caffeine calculator also informed me that for an adult of my size, the absolute limit should be 11.4 cups per day. That seems like a lot, even if we're talking about actual cups and not mugs.

The bottom line? Pretty much every expert has a different response to the question, so we don't know where the line is. Until we get a definitive answer, I'm going with no more than two mugs of green tea per day; that's probably somewhere in the neighborhood of three cups, depending on the size of my mug, which will hopefully send some of the benefits and few of the adverse effects my way. That's just me, though — you may feel fine drinking more, or you may want to go with less. Totally your call; again, the key word is “moderation.” Just, y'know… don't drink 286.6 cups of it a day, OK?