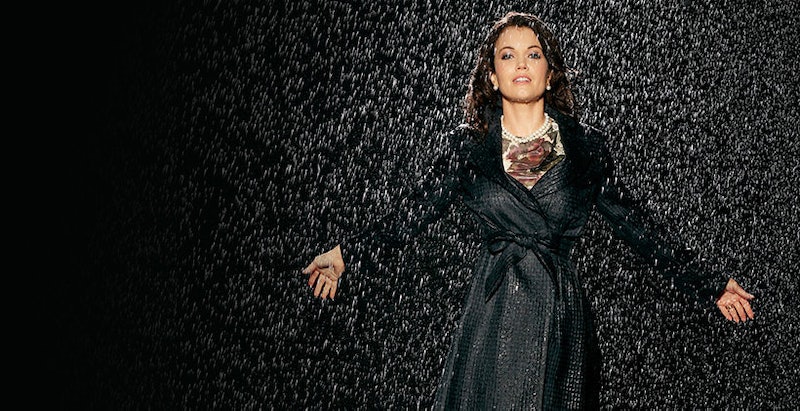 Every Thursday night I look forward to Scandal, and every Friday morning I grit my teeth after reading the Mellie-hating episode recaps and reviews. Yes, Mellie Grant is cold, calculating, manipulative, and highly ambitious. What's the problem? We love Frank Underwood on House of Cards. Scandal's own Cyrus Beane fits that description perfectly and he's a murderer, yet he has his own Internet fan club. The problem is that we collectively choose to view Mellie as a one-dimensional, pushy wife rather than what she truly is, a damn good politician married to a really, really dumb one. You can call her a psychopath until you're blue in the face, but that won't make it true. She's not crazy; she's frustrated, and with good reason. Honestly, take a look at her life.

Has Fitzgerald Grant ever done anything valuable? Seriously. The whole premise of Scandal was that he deserved to be in the White House no matter what because he was such a dazzling genius on the white horse of justice except, have we ever seen him make a good decision that wasn't actually someone else's? The answer is no. Also, for such a moral good guy, he sure does murder, cheat, and lie. Mellie, on the other hand, was a star student with an impressive career who dropped everything for this husband who she had to whip into shape every step of his career, even though what she truly wanted was to be in his position. Everyone knows Mellie wants to run for office and take over the world, but instead, she wastes all of her brilliant ideas and impressive mastery of the press (except when she briefly turned against Fitz) for his benefit.

Who Constantly, Shamelessly, and Aggressively Violates Their Marriage Vows

I don't mean to turn this into a rant against Fitz, who by my estimation is the single most despicable character on television today, but come on. We hate Mellie because she's such a horrible wife. Interesting, because from what I've seen, her husband cheats on her repeatedly with Amanda Tanner and Olivia Pope. More importantly, when she confronts him and asks him to stop, he refuses and emphasizes how much he loves Olivia. Oh, and he knows Mellie loves him. Like really loves him. Like loves him enough to give up her life for him without even asking him to be nice to her. What a shrew, right?

Leaving Her With No Friends or Allies

Scandal is understandably on Olivia Pope's side, and she who wears the white hat isn't exactly on good terms with the First Lady. Okay, fine. But Mellie does have feelings. In fact, she has enough feelings to have been really hurt when she found out that her only friend, Olivia Pope, was banging her husband. Worse, said husband loved and respected Ms. Pope more than his own wife. Did Mellie attempt to kill Olivia, ruin her image, or even remove her from her husband's life? Of course not. How could she? Everyone likes Olivia more, and the only person who even talks to Mellie is a monosyllabic FBI agent.

So When She Finally Tries to Leave Her Husband, She's Faced with Disastrous Personal Consequences

Mellie does the right thing when she decides to reveal Fitz's infidelity. Really. That's what you do when your husband who you love humiliates you constantly and refuses to back down for a single moment. Yes, she denied him a divorce when he asked for it, contributing to their toxic relationship. But it's not that Mellie was such a villainous bitch who refused divorce for no reason; she considered divorce on multiple occasions, but decided to put both of their political careers first like a good politician. Plus, as mentioned earlier, she loves him (inexplicably). When she does call him out? Well, her world comes crashing down on her, and she realizes she can never have the political career she wants without saving her marriage. Consequently, she has to suck it up and ask Olivia to come back to Fitz's reelection campaign. Talk about awkward, painful, and awful.

In other words, Mellie is a victim married to a monster who exercises physical, emotional, and psychological control over his mistress, scares his children, mistreats his wife, kills Supreme Court Justices, abuses his presidential powers, lies, cheats, steals, and kills the mothers of loved ones. In the language of Shonda Rhimes: Don't hate on Mellie. Don't. She's not the one who deserves it.