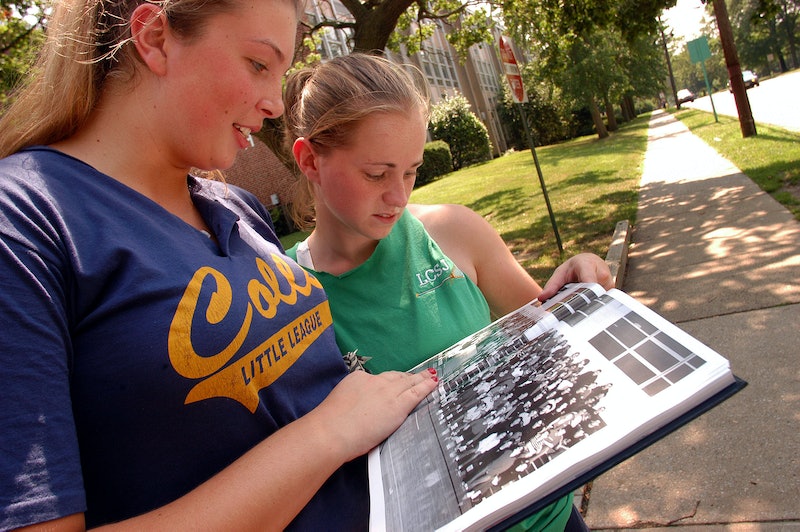 Jessica Morales, a Florida high school senior, didn’t expect to have to see a racist picture in her yearbook. Unfortunately, that’s exactly what she did see: A photo of students dressed in ponchos, mustaches and sombreros while holding fake green cards. One of the students even wore a t-shirt that said “Border Patrol.” The photo took up nearly half of the page of the $90 yearbook. Disappointed with what she saw, Morales posted the racist yearbook photo to Twitter, where it quickly became viral.

“It was just really offensive, especially because the picture kind of belittles the whole issue,” Morales told WFTX, referring specifically to immigration, an issue that her parents still have to contend with.

Her father, Miguel Morales, saw the photo and had a similar reaction. ”It's really racist, I can tell you that," he said. "I've never seen anything like that, I thought it was 2015 and people don't act like that.”

Morales shared the photo with her friend in Texas, who also shared it on social media. It wasn't long before it attracted the attention of other students and Twitter users who were similarly offended by the ignorant photo. Here is the exact picture that was put into the school's 2015 yearbook:

"The picture in question is from Naples High School’s Spirit week. The Naples High yearbook staff has a vetting process for which all content is reviewed. If anyone on the yearbook team finds a picture questionable, the yearbook sponsor brings it forward to Principal Saba. That regrettably did not happen in this case."

Students also said that they didn’t have any negative intentions, but as we should know by now, intent is never an excuse for impact. The outfits were culturally appropriative, belittling, and enforced numerous stereotypes. Students claimed that it was just supposed to be a fun photo for spirit day, but the theme when the photo took places was "Twin Day".

So far, the district isn’t planning on reprimanding its students, a complicity that’s very disappointing for the students and individuals who were offended by this photo. "This a highlight of something they did this year. This is something Naples High School condones and represents,” said Perez, Morales’s friend.

More like this
Black History Month UK’s 2022 Theme Calls For Action, Not Words
By Maxine Harrison
Chris Kaba's Family Continue Fight For Justice After Viewing Police Bodycam Footage
By Sophie McEvoy
The Real Reason Your Instagram Story Viewers Show Up In That Order
By Emma Carey
15 Halloween Costumes Inspired By TikTok Trends
By Emma Carey
Get Even More From Bustle — Sign Up For The Newsletter