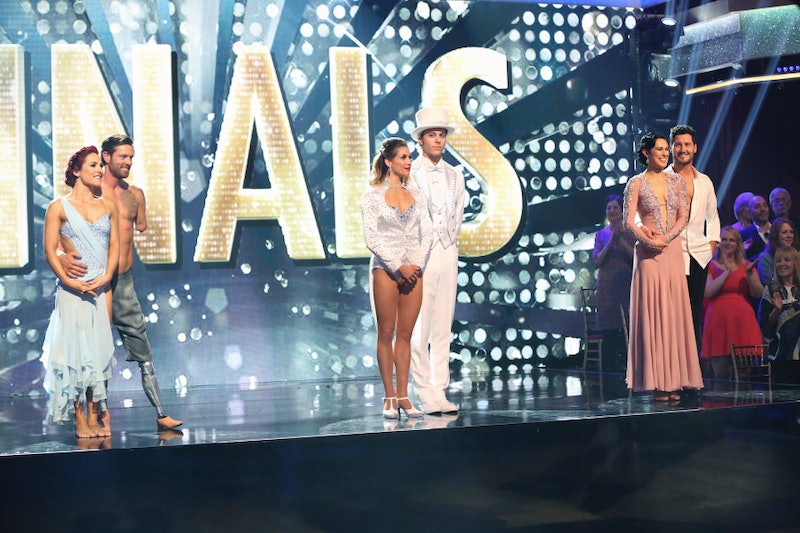 It's been a really close race for this season's frontrunners, but on Tuesday Rumer Willis and Val Chmerkovskiy won Dancing With The Stars, and the golden Mirrorball trophy has never been more well-deserved. Honestly, it could have gone to any of the top three contestants and I would have been happy; they all worked equally hard and were extremely talented. But, I was glad to see Rumer and Val win because it proved that talent is rewarded in this competition.

The win was special for a number of reasons, but also because it granted pro Val his first victory. He's been with the show since 2006, teaching countless celebrities how to dance; it was about time that he took home the win. This was an incredible season, and it was a good one to mark the show's 10th anniversary. Never has there been such a tight competition filled with so many deserving stars.

Val and Rumer were of course overjoyed to have won after completeing a perfect 40/40 foxtrot/pasodoble set to "Big Jet Plane." The judges were in an uproar about their talent, praising both Val's choreography and Rumer's skills. "You are as good as anyone who's ever been on Dancing With the Stars," Len Goodman raved when they finished their final dance.

As for the runners-up, although Noah Galloway and Riker Lynch were no doubt disappointed to not have been named the winner, they had nothing but nice things to say about their experience. "It's because of all the support that's out there [that I made it this far]," Noah said. "I've loved every minute of that." Riker Lynch was equally grateful saying, "The whole experience has been unbelievable .... so many great memories."

It's too bad the show couldn't have crowned three winners, but I'm happy with the results. Now that we have our DWTS champion, excuse me while I watch their flawless final number over and over again.

More like this
The Ultimate Guide To 'DWTS' Season 31’s Move To Streaming On Disney+
By Brad Witter
Teresa Giudice Flipped A Table — Again —  On The 'DWTS' Season 31 Premiere
By Jake Viswanath
What’s New On Netflix: Ana De Armas’ 'Blonde' & A Nick Kroll Special
By Arya Roshanian
Everything To Know About 'RHONJ' Season 13
By Brad Witter and Jake Viswanath
Get Even More From Bustle — Sign Up For The Newsletter