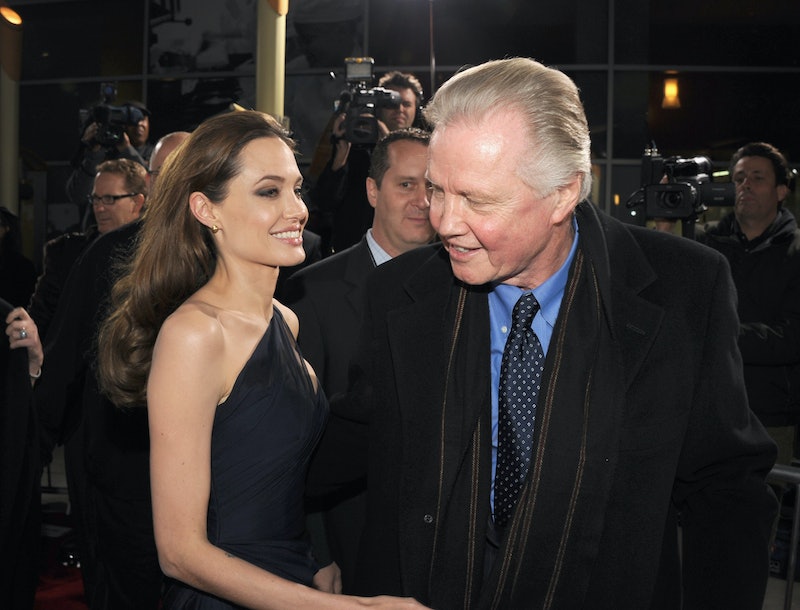 Though you may roll your eyes when someone tells you that you choose men who remind you of your dad, the facts are pretty clear: if you're attracted to members of the opposite sex, chances are high that you'll eventually partner up with someone who looks like your parent. The phenomenon of people seeking out partners who look like their opposite-gendered parent is more than just an old wives' tale; it has been confirmed by a lot of research, including a 2003 study which discovered that wives and their mothers-in-law can often be matched by strangers based only on facial resemblance, and a 2002 study that found that people raised by older parents were more likely to go for older romantic partners. Some studies have even postulated that this tendency extends all the way to eye and hair color — so the daughter of a green-eyed, brown-haired man is more likely to date brown-haired, green-eyed men herself.

Let's get one thing straight right off the bat, though: No one is claiming that you're consciously jumping on Tinder and looking for people who remind you of your parents. Rather, this research comes about because the science of attraction is hilariously complex; every week, some researchers release a new study about scent and pheromones, testosterone levels, facial ratio, or some other science-certified measure of sexiness, in a further attempt to understand why we find some people to be hot. These parental resemblance studies are just another addition to that vast body of research.

But they can raise some very squicky Oedipus-esque feelings if the science behind them isn't properly explained. So yes, there's a genuine scientific basis for why Angelina Jolie would pair off with Brad Pitt, a man who bears a passing resemblance to her father, Jon Voight. But relax — it's not for the reasons you think.

Why Do We Pick Partners Who Look Like Our Parents?

Why would we pick a romantic partner who looks like the person who told us to clean our room? There are several competing theories about why there's often a link between our partner's looks and our parent's looks. One is that we have a biological imperative to pass on our genes, so picking a partner who looks similar to a parent is the easiest way to guarantee a consistent lineage.

Another is based around the idea that prolonged exposure to our parent as a child makes us favor their traits. One study found that sheep raised by goat mothers preferred the company of goats over sheep as adults, and vice versa; it's hypothesized that our preference for people who remind us of our parents comes from a similar place. If we've spent a lot of time with a particular kind of male or female face, it makes sense that it could be "molded" into our brains as both a standard of male or female beauty and a guarantee of future good times (particularly if our childhoods were happy and stable).

One more hat thrown into the "why you like guys who look like your dad" ring? Imprinting. On the surface, imprinting sounds similar to exposure, but it's not: Rather, this theory hinges on the idea that since our parents' faces are the first ones we see when we're babies, we "imprint" upon them as ducklings do. As we go on in life, we automatically classify that kind of face and its characteristics as familiar and nurturing — and we prioritize those characteristics in a partner, because they're classified in our minds as the traits of someone who is good at raising children.

How Does This Preference Play Out?

When we say that people pick out partners who look like their parents, we don't mean that they just pick somebody with the same hair and eye color as their opposite-gendered parent; studies have shown that we tend to pick people with facial structures and other physical qualities in common with our parent, as well.

But research on the subject is not as cut-and-dried as it may seem. A lot of articles cite a famous 2008 Hungarian study on the subject, which claimed to discover that not only did people pick partners who were were really facially similar to their opposite-gendered parents, they focused on different areas of the face, depending on gender: Women looked for similarities to their fathers in centers of men's faces, while men looked for similarities to their mothers in the lips and jaws of potential partners. Unfortunately, it turns out that the study had to be retracted after "a number of serious errors" were found in the calculations.

But even though the study was flawed, it may have been onto something — particularly with the idea that we look for facial similarities in different areas of the face based on which parent we're thinking of. Checking the center of a man's face for parental resemblance fits with the theory that male attractiveness is based on symmetry, while looking at a woman's lips and jaw for similarities also corresponds with the concept that full lips and small chins signal higher estrogen levels and healthy overall fertility in women. But we're going to have to wait for somebody else to do another, more rigorous experiment before we can truly make those kinds of big claims.

What Should We Do With All This Information?

There is still a lot for science to explain when it comes to understanding why we might be attracted to people who look like our parents. Nobody has yet done a study on what this means for same-sex attraction, and whether gay women and men go for partners who look like their parents of the same gender. A study from 2010 has also thrown a wrench into the works by pointing out that, if people are shown supposedly "anonymous" faces with 45 percent of their own features spliced into them, they'll rate them as very attractive – which means we're just attracted to ourselves, and may be attracted to people who look like our parents as an extension of that. So we're narcissists who want somebody with DNA as similar to ours as possible. Good work, everyone.

Unsurprisingly, the phenomenon seems to be strongest among people who have good relationships with their parents — if you come from an abusive background, you're probably likely to pick a partner who doesn't remind you of a parent at all. But no studies have been done on whether picking a partner based on parental resemblance guarantees a good or healthy marriage either. If we discovered that, at least we could make bets at weddings on Years Till Divorce using pictures of the mother-in-law and bride, plus some red pen. Oh, well.

More like this
The Best Time To Date After A Breakup, According To Experts
By Bustle Editors
Virgo & Sagittarius Zodiac Compatibility, According To Astrologers
By Kristine Fellizar
Hinge's New NFAQ Feature Is Demystifying Queer Dating
By Emma Carey
20 Things You Should Never Tolerate In A Relationship
By Rachel Sanoff and Kathleen Ferraro
Get Even More From Bustle — Sign Up For The Newsletter