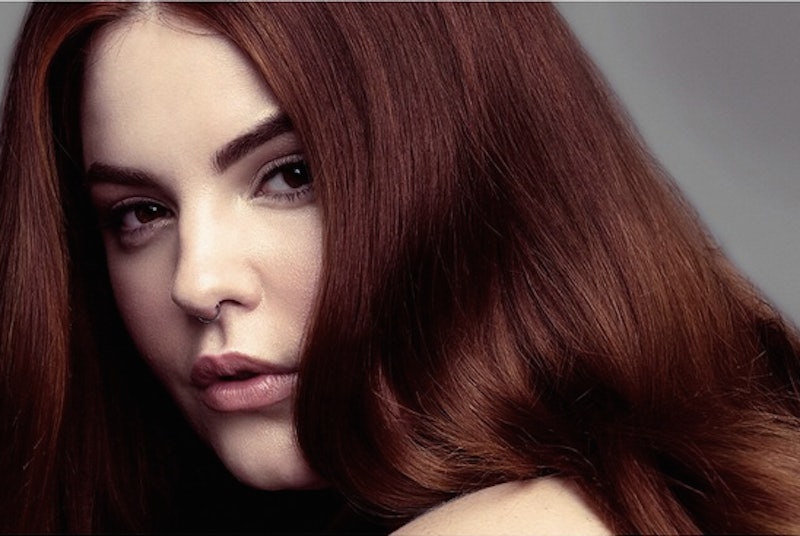 If you're a fan of plus-size fashion, you probably know about the amazing work of blogger and model Tess Holliday. Today, Tess Holliday covers People Magazine and the June cover shot has been released online, along with a taste of her incredible story. The issue will be on newsstands Friday, but in the meantime we can celebrate the amazing story of this body-positive advocate turned cover girl.

Back in January, Holliday became the first size 22 model to sign with a major agency, and according to her, her phone has been ringing off the hook ever since. "It's good, but it's a lot," she told People. She's been traveling the world nonstop these last few months and has done notable campaigns for companies like Torrid and Benefit Cosmetics. But Holliday is not an overnight success as she modeled for 14 years before her big break. When she went on her first casting call at age 15, she recalls her rejection, telling People, "I got one call back and they said, 'Look, you have a pretty face, but you're too short and you're too big.'"

This wasn't the only hardship she faced, however, as she was bullied about her weight by her peers in Mississippi. "I was getting shoved into lockers, I was being called names," she said. "I was getting death threats at my house. It was awful." Now she's overcome her bullies, adversaries, and doubters by making it in the fashion world and landing the cover of a national magazine.

This cover represents all of Holliday's hard work and the dedication that has paid off big time. "I just knew that I could do it. I wasn't the best, and I still am not the best. They key to it is just doing it." While many of us probably disagree that "she's not the best," her story represents so many of our own tales, which is why this is such a significant event. It wasn't long ago that plus-size models were completely cast out of mainstream fashion, but we've come a long way in the last year alone, as plus-size models like Crystal Renn and Gitte Lill are walking the catwalks at Fashion Week and landing spreads in Vogue. This is another huge victory for plus-size representation, which is only growing more positive and mainstream by the day.

Holliday represents not only body positivity, but also the importance of hard work and dedication. Imagine if she had given up on her modeling career a year ago — she would never have achieved the success she has today. So if you have a dream, let her be your motivation to keep going and not let inevitable obstacles stand in your way.