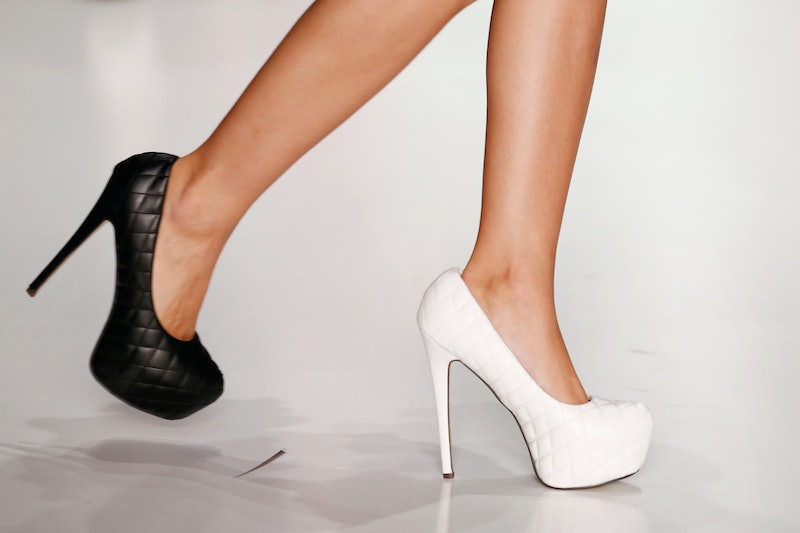 A couple of years ago, an interesting study was published that suggested you can tell a lot about someone's personality based on her footwear alone. The most surprising find was that uncomfortable-looking shoes (i.e. heels) tended to be found on calm personalities. However, according to a recent article in The Atlantic, women who wear heels in the workplace often seem superficial and unintelligent.

The article explores the question of whether or not ambitious women in tech should wear high heels. It notes that while in some industries, like public relations, wearing heels as part of a fashionable outfit is a key element to success, in Silicon Valley, the opposite is true. In the tech world, women who wear heels are perceived as stupid, and many men who dominate the industry believe fashionable women spend too much time caring about their appearances to be respectable. (Or they're trying to use their femininity to get ahead, instead of their merit.)

In response to these prejudices, many women in the Valley have taken to intentionally dressing down Mark Zuckerberg-style so that they can earn respect from their "laid back" male counterparts and prove that their priorities are not sartorial. Instead of heels they wear sandals, instead of dresses they wear jeans. Even if they'd prefer to look a bit more stylish. That's bullshit.

Wearing heels does not make one stupid. Donning a trendy outfit does not make one superficial. And the 15 seconds it takes to swipe on eyeliner does not detract from one's ability to be devoted to a start-up. Being feminine is not the same thing as using one's femininity as an advantage.

Judging women negatively for wearing clothing that is traditionally feminine is just as horrid as asserting that women in the office should all dress like Joan from Mad Men. Although some men seem to think that heel-wearing women are asking to be perceived as fashion-prioritizing, sexual objects, these men actually possess a special brand of sexism that says "Women are only smart and successful if they're like men." It brings back thoughts of the "power suit" that ambitious women wore in the 1980s and makes Silicon Valley seem surprisingly outdated.

There are women fighting these stereotypes, by wearing whatever the hell they want, and hopefully more will follow suit. Because even though some douche bags don't mind looking ridiculous in Google Glass, flip flops, and sweatshirts, some people just feel more confident when they look fashionable. And there's nothing wrong with that. (Though admittedly, I might not take a career woman seriously who was wearing these shoes.)