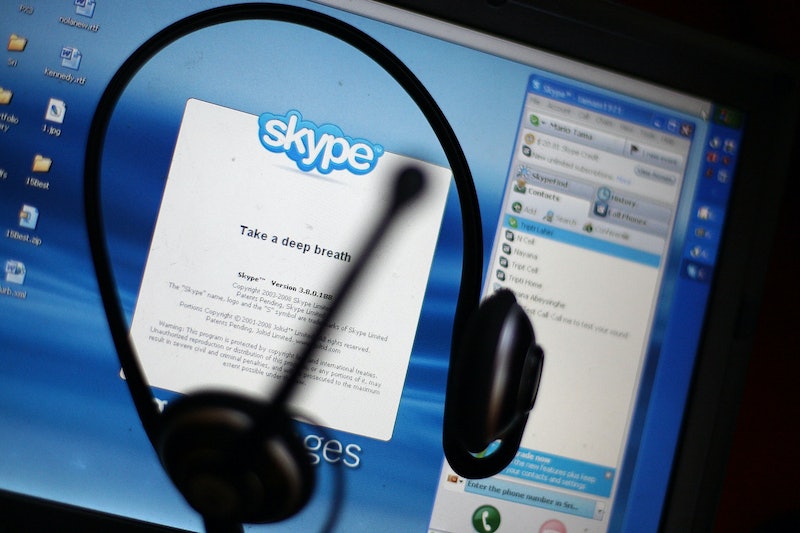 You agree to be in a certain place at a certain time, and you can’t wait to chat with your friend. It’s just like any coffee date or catch-up—except instead of checking out a new bar or café, you’ve committed to sit at home, alone, in front of your computer.

I’ve been singing the praises of Skype since 2010, when I moved away for college and began relying on the free video messaging service to stay in touch with friends and family back home. I credit Skype with helping me maintain those relationships, and I’ve even interviewed for internships—including this one—over Skype.

But even as Skype approaches its tenth birthday in August, we’ve yet to establish etiquette guidelines for Skype as we have for phone calls and real-life rendezvous.

The most important issue, I think, is that we haven’t agreed on how binding a Skype date is. Should an impromptu social event in the real world take precedence over a pre-planned virtual engagement? It can seem rude to excuse yourself from a social activity to go sit in front of your computer—but flaking on a Skype date can be just as annoying as bailing in real life.

The Skype date occupies some ambiguous space between a spontaneous phone call and a lunch date, and it is made all the more nebulous by the ever-present possibility that one party’s Internet connection won’t work well enough to support a video call. Urban Dictionary, the ultimate authority, even references this conundrum in its ostensive definition of “Skype date”: “Dude I gotta find a wifi signal, I have a Skype date!”

This can all seem like more effort than it’s worth, but scheduling Skype time can be instrumental in keeping a relationship “warm” until you can actually hang out. Robin Dunbar, a leading anthropologist at Oxford University, has argued that new technologies like Skype can actually extend the life span of a relationship.

Last year, Dunbar led a team of social scientists measuring how satisfied people felt after an interaction with a close friend on different types of media, including talking on the phone, Skyping, speaking in person, texting and instant messaging. Unsurprisingly, face-to-face conversations were the most fulfilling—but Skype came in at a solid second place. Dunbar suggested it’s the webcam that makes the difference: “If you can see the other person, you can pick up cues,” he said. “When you’re joking or being ironic, it’s the facial expression that really gives it away.” The pleasure of the interaction also derives from the immediacy of the response: “As you’re saying it, the other person is already reacting.”

Assuming everyone’s Broadband is up to speed, anyway.

More like this
9 Alternatives To The 3-Day Texting Rule In Dating
By Ginny Hogan
The Most Compatible Life Path Numbers, According To Numerologists
By Kristine Fellizar
How To Add Music To An Instagram Post
By Emma Carey
How To Use The Crying Filter On Snapchat, TikTok, Instagram & More
By Emma Carey
Get Even More From Bustle — Sign Up For The Newsletter