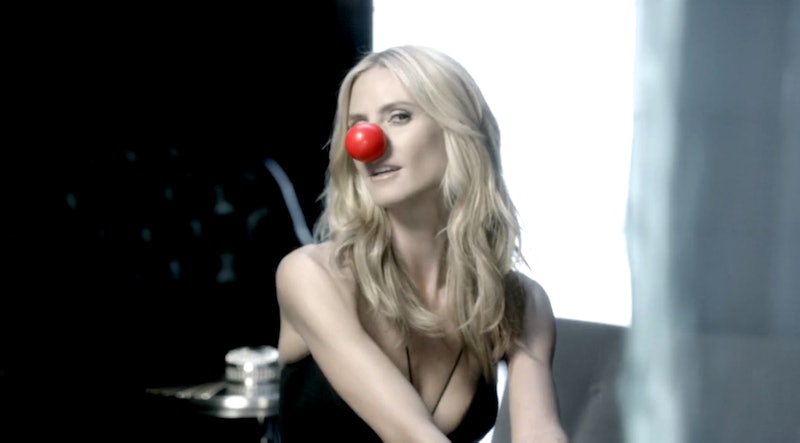 In the spirit of Robin Williams's famous character (and real-life doctor) Patch Adams, there's a new campaign that's dedicated to helping children around the world through laughter and entertainment. Making its debut in the U.S. on Thursday, Red Nose Day raises money to help children living in poverty. After a month-long campaign, the inaugural Red Nose Day will culminate in a three-hour TV special aired on NBC featuring a vast array of big-name comedians, musicians, and entertainers. At the heart of it, however, is giving children better lives, and here's how you can help.

Red Nose Day has already been a major biennial telethon in the UK, organized by charity Comic Relief, but for the first time ever it's coming to the States. People across the country will come together for the occasion to raise awareness and funds that will then go towards various charities across the globe. Red Nose Day works with these organizations to fulfill three main goals: 1) Keeping children safe (reducing violence, exploitation, and abuse), 2) Educating children (providing them access to basic education and job training), and 3) Making sure they're healthy (providing them access to health care, clean water, and sanitation).

50 percent of the money is used towards children right here in the U.S., while the other 50 percent will go towards impoverished countries around the world. If you want to help Red Nose Day raise money, here's how.

Browse the organization's fundraising kit, which includes a checklist, toolkit, instructions for creating your fundraiser page, logos to download, and fundraising guidelines.

Check out the site's suggested fundraising ideas, which are all designed to be fun and incite laughter, like having a bake sale, wearing a silly outfit to garner donations, sponsoring your boss to engage in some office shenanigans, and challenge yourself to stop swearing — every time you do you have to donate more money.

Set up your fundraising page through Crowdrise and invite as many people to it as possible. You can also make donations directly through the page or join another team.

The cause has attracted the support of numerous celebrities, who will convene for the live benefit on NBC on Thursday night at 8 p.m. ET. The show will feature guest appearances from a plethora of celebrities — Julia Roberts, Will Ferrell, Jimmy Fallon, Reese Witherspoon, and Elizabeth Banks, just to name a few — original sketch comedy skits, videos produced by Funny or Die, and musical performances from John Mellencamp and Keith Urban.

You can get a preview of the star-studded spectacular on the Red Nose Day site and NBC's Red Nose Day page, which features a variety of fun promo videos, like Peter Dinklage performing Game of Thrones: The Musical, Indianna Jones with Anna Kendrick, and a photo gallery of celebrities donning the famous red nose, including Kim Kardashian, Chris Pratt, Christina Aguilera, and Nick Offerman.

Red Nose Day has been a tradition in the UK for 30 years, but after its debut this year, it will surely catch on as a mainstay in the U.S. as well.

More like this
Cheryl Remembers “Bright Star” Sarah Harding In Heartfelt Essay
By Sophie McEvoy
Chris Kaba's Family Continue Fight For Justice After Viewing Police Bodycam Footage
By Sophie McEvoy
Women Around The World Are Cutting Their Hair In Solidarity With Mahsa Amini
By Darshita Goyal
Bennifer, Kravis, & 14 Other Fun Celeb Couples Halloween Costume Ideas
By Emma Carey and Brittany Leitner
Get Even More From Bustle — Sign Up For The Newsletter