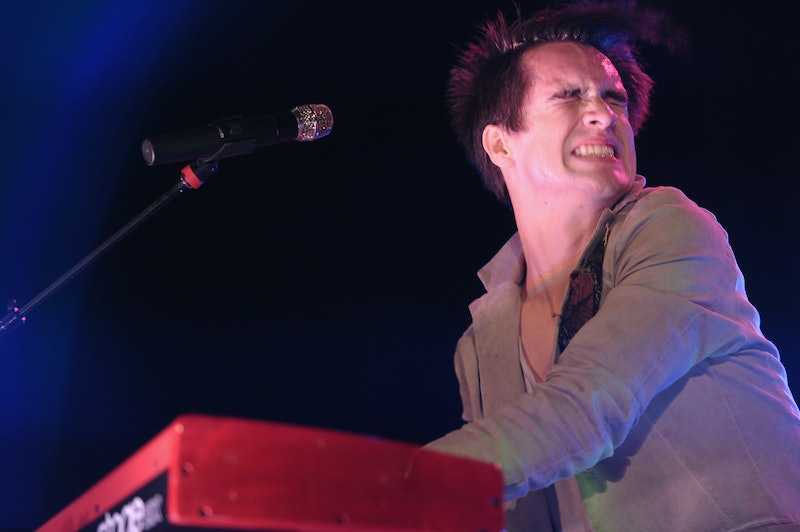 We may have moved on from Panic! At the Disco sometime around our eighth grade year, but we figure now is the time to dredge that back up. The band's frontman has been the center of gay rumors for years, and now Brendon Urie opens up about his homosexual experiences with a frankness and nonchalantness that makes us want to quietly stand next to him snapping in a z-formation.

Urie should probably be entered into some sort of textbook dealing with the topic of how to have a good head on your shoulders when it comes to sexuality. Urie — who married a lady earlier this year — had this to say to PrideSource about attraction:

I find myself being attracted to dudes all the time. I'm like, "Wow, that's a beautiful man." There's no shame in it; that's how I feel. To stifle that would probably bring on stress and probably make somebody homophobic... I guess if I had to classify myself, I'd say I'm straight. But I have, in the past, experimented in other realms of homosexuality and bisexuality. Overall I'm more attracted to women. Like with my wife, I'm just so insanely in love and attracted to my wife that I go, "Well, OK, my love of musicals can't trump that I love pussy" [laughs]

This was in response to a tweet Urie sent out last year that claimed that "everyone's a little gay." As someone who went to a liberal arts school I can say with glaring obnoxiousness that I am totally on board with this. This is, after all, why the Kinsey scale exists.

Urie seems to identify mainly as straight, but here are some celebrities who have come out as bisexual: Megan Mullally (because she's the best human), Marlon Brando, Megan Fox, Anna Paquin, Evan Rachel Wood, Azealia Banks, Amber Heard, and Drew Barrymore. The list goes on, but it just goes to show: Like whatever kinda genitals you wanna like, but just keep being awesome.

More like this
GIRLI & Q Fell In Love At A Skatepark & Never Looked Back
By Jessica Morgan
Daryl McCormack On His Unusual First Audition With Emma Thompson
By Olivia-Anne Cleary
Lilibet & Prince Charles’ First Meeting Was Emotional, According To Reports
By El Hunt
'Mean Girls' ​​Daniel Franzese Spoke Candidly About Conversion Therapy
By Rachel Mantock
Get Even More From Bustle — Sign Up For The Newsletter