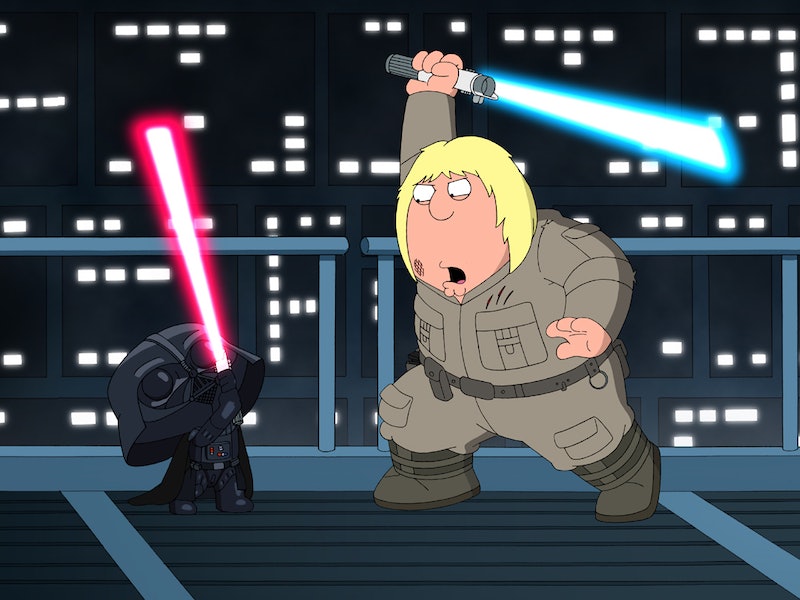 The Star Wars film franchise is easily one of the most quotable, memorable, and inspirational franchises in all of cinematic history. References to the Star Wars films in movies and television prove there is no question these films are beloved by audiences and filmmakers alike. I, for example, have an ice tray in the shape of Han Solo when he's encased in carbonite from Stars Wars Episode V: The Empire Strikes Back. It is glorious. And I frequently use Han Solo's reply of "I know" whenever a family member utters, "I love you." Clearly I'm a Han fan, but that's the thing. It's impossible for the films not to permeate everyday life in so many different ways. That's why it always makes perfect sense to me when other films and television shows reference the Star Wars film franchise. But these references to Empire Strikes Back — some subtle, some more than obvious — are some of the best and a perfect way to remember the film on its 35th anniversary.

For obvious reasons, I'm not going to include references from a show that constantly references Star Wars like The Big Bang Theory, Chuck, Buffy the Vampire Slayer, That 70s Show, and even series like The Daily Show with Jon Stewart and The Colbert Report. Because seriously, there are too many references in these show to even count and rank properly. And they're all amazing. But these other films and shows have found fun ways to pay homage to a film franchise that will live forever, especially if they keep adding new films to the list!

"Well I'm Luke Bill. And you're not my father!"

Yup. This classic line followed by the two boys battling each other as knights using their swords as lightsabers is simple yet genius.

In many ways the final battle between Buzz Lightyear and the evil Zurg evokes similarities to Luke Skywalker and Darth Vader's fight in Empire Strikes Back, including the final moment when Zurg tells Buzz he is Buzz's father.

Sweet, sweet Hurley, I don't doubt that he's read the script for Empire Strikes Back hundreds of times.

Jay and Silent Bob Strike Back

Obviously the title itself is a reference to Empire, but the most perfect reference from this film (helmed by Star Wars lover Kevin Smith) comes with the casting of Mark Hamill, the original Luke Skywalker, and this extremely NSFW battle.

But in the episode "Mary The Paralegal," Ted's date Mary makes a joke about how Sandy Rivers' hair looks like he puts it on the same way Darth Vader puts on his helmet in Empire Strikes Back, and it's hilarious. That, coupled with the moment where Barney discovers he's one-quarter Canadian and echoes Luke Skywalker's sentiments when he discover Darth is his father, are two subtle and hilarious examples of great Star Wars references.

Who knew Dr. Bailey loved science fiction so much? Who knew I could love Dr. Bailey even more after this scene?

Much like shows such as The Big Bang Theory and Chuck, 30 Rock did a great job of featuring several jokes involving Star Wars throughout its seven season run. But one of my favorites is from Don Geiss' funeral when viewers discover he is being frozen like Han Solo in Carbonite. Perfect. Just perfect.

Seth Rogen takes the most important line from Empire Strikes Back and arguably even the whole Star Wars series, and makes it the perfect stoner joke.

Buster discovers his true father's identity and loses his hand all in one fail swoop. Seems eerily close to Luke Skywalker in Empire doesn't it? Am I comparing Buster Bluth to Luke Skywalker? Yes. Do I now wish I could take it back? A little, but it works!