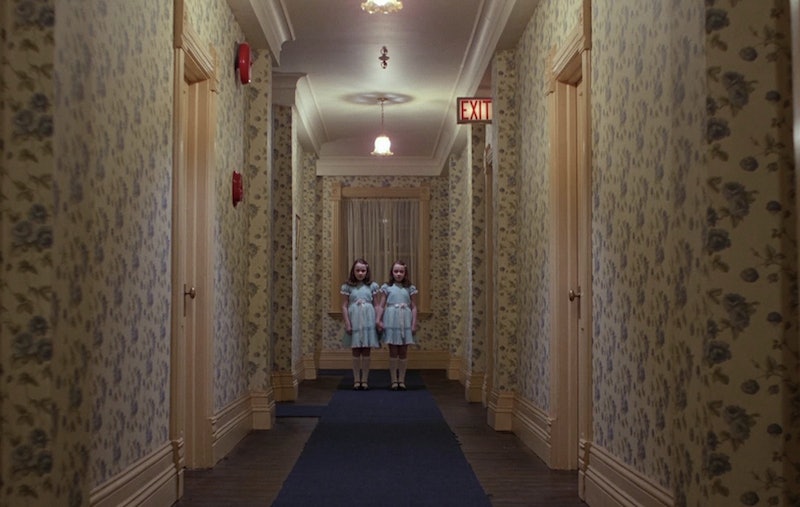 For more than three decades, people have been obsessed with The Shining. I don't blame them, it's a ridiculously good, truly scary film. But for many people, it's all about the hidden messages of the movie. In fact, some are so obsessed with the Stanley Kubrick classic that a documentary had to be made called Room 237 about the many, many conspiracy theories behind the film. Now I'm not sure how much I agree with most of these theories but considering how incredibly detailed the visual and audio "evidence" they've gathered is, it definitely peaks my interest. Room 237 and thousands of fans constantly provide some incredible conspiracies of the symbolism, hidden apologies, commentary and secrets that Kubrick might have shared with the world, and in honor of The Shining's 35th anniversary, I've compiled some of the best.

Mind you there are hundreds more where these came from, Room 237 alone has more than the ones listed. But these nine happen to either be the most plausible based on the arguments provided or they're the most absurd. And let's be honest, those are my absolute favorites. There's no doubt in my mind that Kubrick hid secrets within this incredible work, but are these conspiracies accurate? Check them out and decide for yourself.

Allegedly, the US government hired Stanley Kubrick to fake the moon landing and Neil Armstrong's subsequent walk on the moon. So when it came time for Kubrick to make The Shining, he supposedly put coded messages in the film as an apology for helping with the fake moon landing. Conspiracy theorists point to "evidence" like the containers of Tang in the hotel's pantry and the fact that Danny wears an Apollo 11 sweater. Plus Room 237 is supposedly a reference to the distance between the Earth and the moon, which is 237,000 miles.

2. The Hotel Is Hell

The theory here is that when Jack Torrance signed the contract to be the winter overtaker at the Overlook Hotel, he essentially signed himself over to the Devil to manage Hell. It also does explain his descent into evil.

One of the Room 237 theories argues that the film is an indictment of the genocide of Native Americans caused in our country thanks to the Overlook Hotel's history of tensions between Navajo and white man on the land in the 1900s. There are also many examples of Native American imagery and artwork in the hotel. But the biggest piece of evidence that conspiracy theorists cite is that Kubrick added a line in the film that was not in the book about how the hotel was built on an Indian burial ground.

4. The Film References The Holocaust

Another strange theory from Room 237 is that the film is Kubrick's way of dealing with the Holocaust thanks to the recurring use of the number 42 which was the year the "final solution" was put into use. And apparently the typewriter that Jack uses to write is the reminiscent of the German's technique of making lists to decide who to kill. And the alleged "Nazi eagle symbol" appears in a few scenes.

5. Jack Is The Devil

The final shot of Jack in the picture from the hotel's past has him in a similar position to the image of the Devil in tarot cards.

6. There Is Something In The River Of Blood

This one is better left unexplained and just watched. What do you think about The Shining fan Rob Ager's conspiracy analysis?

The elaborate maze at the Overlook Hotel is supposedly meant to be a play on the old myth of Theseus and the Minotaur, in which Theseus (in the film's case Danny apparently) travelled into an elaborate labyrinth to kill the mythical, evil beast (aka Jack).

8. Frozen & The Shining Are The Same Movie

I hope this is true. Blogger Mary Katharine Ham wrote an amazing post that compared The Shining to Frozen . She apparently argues that "The menacing main character (Elsa and Jack) is a danger to family members, whose volatility increases after a long isolation inside a giant, ornate, high-ceilinged building in a cold, desolate landscape." By Ham's comparison, Anna and Danny are the same, and that Wendy and Olaf are comparable as well. She makes many comparisons and it's actually really fun read.

More like this
David Tennant’s Transformation In ITV’s 'Litvinenko' Is Astonishing
By Sophie McEvoy
This James Bond Event At Abbey Road Studios Was A 007 Fan's Dream
By Samantha Rollins
These ‘Love Actually’ Plotlines Are “Out Of Date,” According To Director Richard Curtis
By Grace Wehniainen
This Iconic ‘Love Actually’ Scene Drove Alan Rickman “Insane”
By Grace Wehniainen
Get Even More From Bustle — Sign Up For The Newsletter