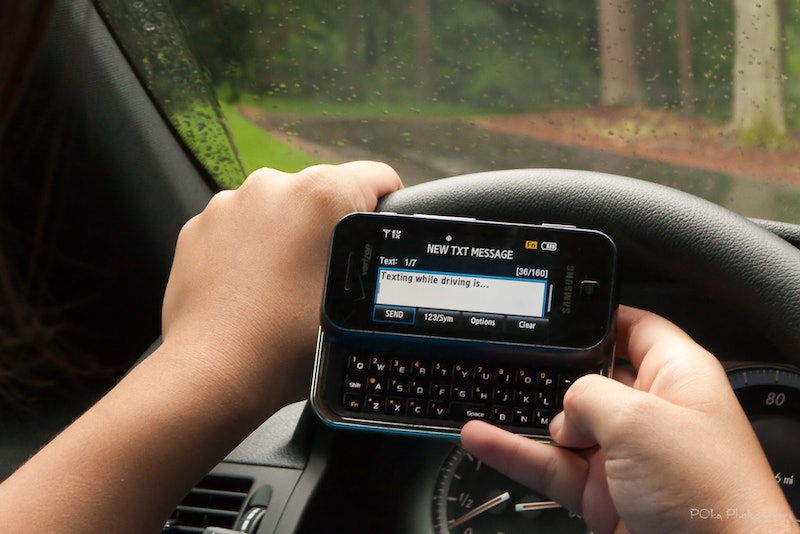 Between Twitter, Instagram, Facebook, email, and everything else, we're all on our phones a lot. We're busy people, and it's understandable. But, maybe we need to learn to put down our phones in certain instances, like, for example, when we're driving: According to a new survey, about a third of drivers admitted to using social media while driving "all the time." For the study, researchers surveyed 2,067 smartphone users between the ages of 16 and 65 that drive at least once a day. While most drivers admitted to at least glancing at their phone while driving, those that said they posting to social media "all the time" is definitely concerning.

Seriously though, about 19 percent of car accidents resulting in injury and nine percent of all fatal crashes are because of distracted driving. "Distracted driving" isn't only using our phones; eating, putting on makeup, and gabbing with our passengers also put us at risk on the road. However, when we're using our phones, we're four times more likely to get in crashes serious enough to injure ourselves.

Besides the fact that about a third of smartphone-using drivers admitted to being on their phone "all the time," the survey had some other pretty surprising results. Here are a few of the takeaways:

1. Texting Is The Worst

Maybe this isn't that surprising, actually, but texting is our number one distraction of choice when we're driving. About 61 percent of respondents said they were either glancing at or actively engaged in text messaged while on the road followed by Twitter, Instagram and Snapchat.

2. What People Are Doing "All The Time"

3. It's A Habit And An Addiction

Check out the full report here — and you guys? Just... put down the phone when you're behind the wheel. Seriously. It's better for everyone.