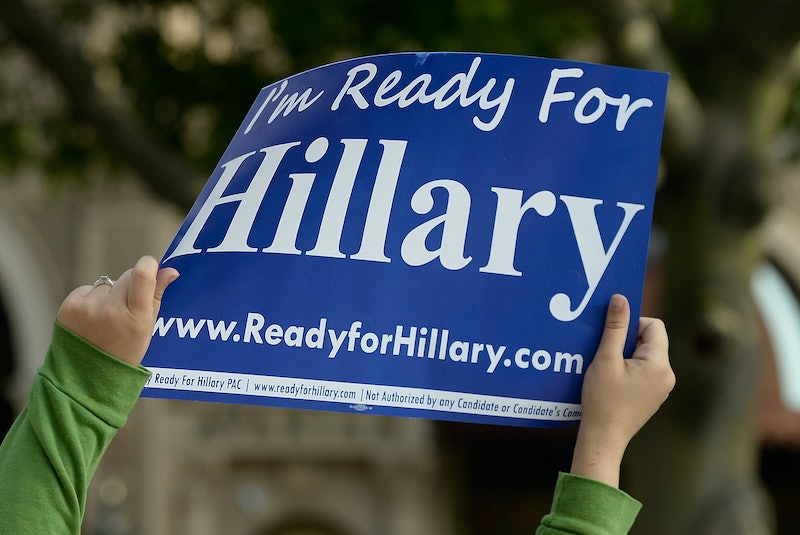 Hillary Clinton's campaign team is starting to look awfully familiar. The presidential hopeful is currently recruiting Buffy Wicks, a former senior aide to Barack Obama that now works as executive director of Priorities USA, a super PAC raising millions for Clinton's campaign. And Wicks isn’t the only Obama veteran that’s ready for Hillary. Over a dozen Obama staffers have already been tapped for Clinton’s 2016 run, including people who worked on his campaign and in his administration.

Obama's 2008 team was heralded as a a team of Washington outsiders that were able to keep away from political drama. In contrast, Hillary's 2008 team was plagued by hostility towards her chief strategist, Mark Penn, who eventually resigned after meeting with Colombian government representatives to promote a free trade agreement that Clinton opposed. Even when he was off the official team, it was widely believed that Penn was still advising Clinton.

As she gears up for her campaign eight years later, it looks like she may have learned her lesson. After reports that Hillary insiders wouldn't join her campaign if she hired Penn again, she's taking a page out of Obama's playbook and wooing his all-star team. She's been recruiting some chief members that helped Obama win — and some who helped her lose.

In 2008, Margolis created a commercial that indirectly referenced Clinton, with Obama saying, “the same old Washington textbook campaigns just won’t do it.” Margolis is known in political circles for using aggressive ads, including during Obama's 2012 campaign against Gov. Mitt Romney.

Four years later, he’s now working for Clinton as her chief media strategist, the same position he held on both of Obama’s campaigns.

While deputy director of the White House Office of Public Engagement, Marlon Marshall helped oversee Affordable Care Act enrollment efforts. In January of this year, he stepped down amidst speculation he would join Clinton's 2016 campaign.

The rumors were right, as Marshall is now Clinton’s director of state campaigns. He's already started leading the charge, traveling to the crucial primary states Iowa and New Hampshire, where Obama defeated Clinton in 2008.

Jim Messina hasn’t officially been snatched by Clinton’s campaign, but Obama’s 2012 campaign manager is now raising money for Clinton by co-chairing Priorities USA. “It's her turn and her time,” Messina told MSNBC reporter Ronan Farrow. “I think she would be the right leader for this country moving forward. And we're going to do whatever it takes to make sure she's the president of the United States.”

Even if Messina never officially becomes part of Clinton's circle, he's playing an integral role when it comes to fundraising.

John Podesta is familiar with the Clinton family, having served as chief of staff when Bill Clinton was in office, advising Clinton during the Monica Lewinsky scandal. In 2013, Obama appointed Podesta as a special advisor after he worked on Obama's presidential transition team in 2008. Keeping up with his reputation to help during controversies, Podesta advised Obama during the difficult roll-out of the Affordable Care Act. Now, he's Clinton's campaign chairman, a role in which he'll be expected to be blunt with Clinton, a trait where some found 2008 campaign chairman Gov. Terry McAuliffe lacking.

Joel Benenson worked as the key pollster on both of Obama's presidential campaigns, as well as his 2008 primary against Clinton. He then worked in the White House as a pollster, in what he characterized as explaining "how to persuade the greatest number of people to their side of the argument." This Obama veteran is back on the campaign trail, playing a big role in Clinton's team as her chief strategist and pollster.

In the eight years since Hillary's failed bid, she's had time to pinpoint exactly where she thinks it all went downhill. This major overhaul of her team is an insight into where she thinks the problems started — and this time, where she's hoping they'll end.