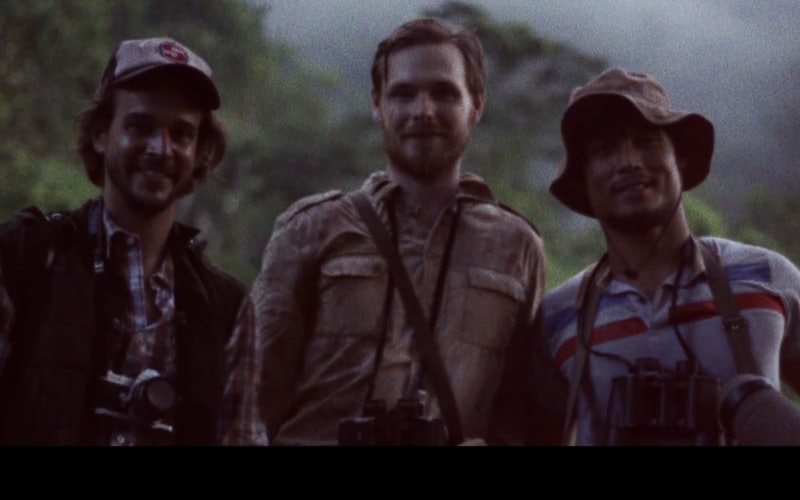 As an entry in Animal Planet's "Monster Week," among such shows as Serial Killer Tiger At Large, it's easy to wonder if The Cannibal in the Jungle is based on a true story. Though it is fictional, the TV film takes its inspiration from a variety of sources, both true and made-up. There's real science underpinning the existence of the small humanoids called "hobbits" (more on that later), which the movie makes into vicious cannibals. But more directly, The Cannibal in the Jungle is a fictional story about a 1977 expedition into the Indonesian jungle that's beset by a cannibalistic tribe, and the resulting court case questioning explorer Timothy Darrow's account of the events. Also floating around Animal Planet's film are Indonesian urban legends based around both the hobbits and the other tribes that still live isolated in the jungle. The movie is a hodgepodge of reality, history, legend, and pure fiction. And if it works well, these will combine into a seamlessly good-bad production, like a more biologically sound version of something on SyFy.

Since everything in The Cannibal in the Jungle is such a cross between reality and fiction, I guess the easiest place to start is with prehistoric times. About 18,000 years ago on the island of Flores, where Cannibal is set, a race of "hobbits" evolved. This species truly was significantly smaller than humans of even that time: "The skeletal evidence suggests that adults of this species had extremely small brains (400 cubic centimeters), stood only about 1 meter (3'6") tall, and weighed around 30 kg." Flash-forward thousands of years to 2003, when the first skeleton from the newly christened Homo floresiensis was discovered. However, by all scientific accounts, these hobbits are now extinct, and there is no evidence of them having been cannibals.

So there are no terrifying cannibal hobbits plaguing Indonesian forests. But cannibalism does have historical/cultural ties in the area. Paul Raffaele is a writer who traveled deep into the Indonesian jungle in 2006 to find tribes that still practice forms of cannibalism. He even brought along a 60 Minutes crew to film his travels to meet the Korowai tribe, during which his crew orchestrated the rescue of a young boy whom they believed would have been the victim of a culturally-condoned form of cannibalism.

However, after the 60 Minutes piece and the release of Raffaele's book, criticism started surfacing later in 2006, questioning the validity of his claims. The Sydney Morning Herald claimed that the work of Rupert Stasch, the reigning expert on these tribes, contradicts Raffaele's account, and "Stasch writes that the Korowai did previously practice ritual killings of suspected cannibal witches, which sometimes involved eating flesh ... [but] they have given up the practice."

In a 2014 interview with Vice, however, Raffaele stuck adamantly to his belief that the cannibalism is real. The consensus seems to be that, as anthropologist Chris Ballard had claimed to the Herald in 2006, "most of these groups have 10 years' experience in feeding this stuff to tourists," and they simply tricked Raffaele.

And here's where Animal Planet starts to break completely from reality and begins working on writing a good story. The synopsis of The Cannibal in the Jungle explains that the story of explorer Timothy Darrow, set in the '70s, is "an imaginative leap inspired by real science." There actually was no Darrow, nor an Indonesian cannibalism court case like the one shown in the movie. It simply uses a documentary format to confuse the line between fact (the existence of Indonesian Homo floresiensis) and fiction (the alleged cannibalism).

With the documentary framing and the other peppered-in bits of real science, it's certainly difficult to tell where Cannibal In the Jungle is real and where it's been fictionalized. Turns out that the craziest element of the movie — the "hobbits" living at the same time as humans — is actually the truest. Meanwhile, the seemingly realistic details, like the 1977 court case, are all fiction.